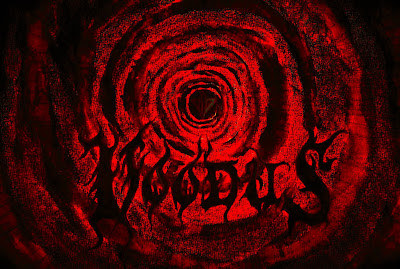 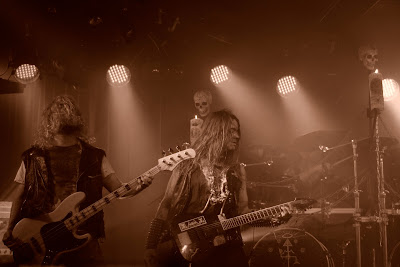 Hail my good old friend Tobbe! First of all tell to the readers  about the Hellish alliance between Jormundgand and German black metal label, Christhunt Productions regarding your debut, "Visions Of The Past” in 2013! (by the way I’m very pleased for  the mention my humble name on your thank-list!) What has been the reception of "Visions of the Past” amongst black metal fans, magazines?
- Hail!
Well, the response has been quite lame to be honest.. But i can understand why! The "Visions..." cd is not the best things we have done during the years... I don't want to go in to any details but I can tell you that I do NOT like it at all!! The lack of inspiration and dark atmosfear on that recording is quite obvious. We wanted too much and went astray on the way somewhere. We needed to take a step back to try to figure it all out, and it ended up with the death of Jormundgand and the rebirth and rising in the shape of Voodus! And I have to say that after we changed name/aim for our spiritual perception, the band has finally found the way back to the true depths again! The music and the atmosfear is better than ever before! We are strong for real now! Hard as iron and black like a shadow!

Jormundgand recorded in "The Burning Light of Daath" as a single for the "Critical Mass vol. II" LP in 2014. Would you be so kind to share some thoughts about it?
- There is not so much to say about that. Dennis who runs the label "Critical Mass" asked us if we wanted to participate on the hardest compilation LP in Sweden? Of course! We said, and recorded "The Burning Light of Daath", which is the first full song that me (Tobbe) and Erik did together. It is in fact a Voodus song and not a creation by Jormundgand, even if the back of the LP say so..... 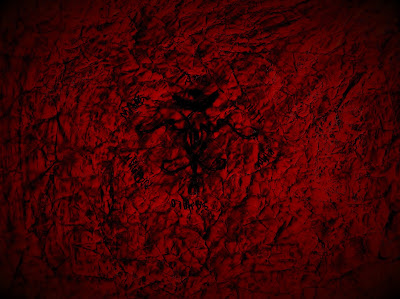 Jormundgand played in August last year with an old Hungarian band, Omen and RAM in Sweden. How were satisfied Hungarian guys with that show? What are your experiences from this concert?
- Yeah! Omen was a pack of really great guys :) Thy did two shows in Sweden and we did one of the gigs along with them! I don't know how their second gig turned out, but in Kungälv where we played it was pretty good. Not so big audience thou.... But it use to be like that.... If there is more than 100 persons, you must be extremely satisfied! And RAM, it´s always a pleasure to do gigs with them! They are a really fucking great live-band. They are true to their Heavy metal heritage, and it makes them  rise above the most of other bands of the scene. I have far more respect for those guys than I feel for 99% of the Black metal scene of today. But I have to say that I feel some kind of dark and dangerous currents from the depths of the scene of today. There are some really great bands out there, like Mephorash, Thy Darkened Shade, Ascension, The Ruins of Beverast, Acrimonious,Nidsang, Valkyrja.......Voodus!

You’ve changed band name Jormundgand to Voodus this summer..Enlighten us about all the important details of this metamorphosis!
- Read the first question and answer!

Voodus has been the band of the week at SwedenMetal in September,2015. Congratulations, my friend, you are really deserved it! Tell us more about it!
- It´s not so much to say! It´s just one internet mag in the big ocean of mags out there that liked our music! Hahaha, but it´s always fun when our music reach out to people. And it is a good thing to have some magazines on your side, to write your words and propaganda when you want to conquer the world!!!! 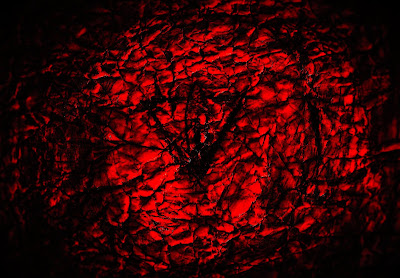 Voodus  is a very active one with live shows this and last year. You’ve shared the stage with bands Ofermod, Mephoras under banner "The Holy Trinity Tour” in Sundsvall, Östersund and Stockholm, Sweden in September. How was that live performance?
- It was great times for us! And we thank Erik from the mighty Mephorash for the opportunity to be a part of this tour! It was a magical time! I mean, to play and to hang out with Black Metal Gods like Mika Belfagor from the mighty Ofermod and Jonas Nebiros from Malign/Mephorash! It was a true honour for us!!! The gigs went out well I think! Specially the gig in Stockholm! It was some kind of dark force in the atmosfear that night! With the Bloodmoon in the night sky to celebrate the end of the tour and all!

If I’m not mistaken, You’ve crushed the audience in Uddevalla on your birthday, 31th of October. Would you be so kind to say some thoughts about this massive show?
- Yeah! We did a gig along with Necrocurse in their hometown! It was a great show!

I’m very thankful to you for your awesome package  of this year (among other things you sent me a lot of posters, Jormundgand’s debut CD and last but not least  new Nifelheim vinyl with dedication of mighty Hellbutcher and latest Necrocurse CD (also with signature of Hellbutcher). As far as I know, Jormundgand helped  to Necrocurse with decoration in their video-clip, called „Devil’s Cobra”. What we should to know about that?
- No problem my friend! The thing is that we played before Necrocurse on that show and we left our scene-show on the scene because we didn't had the time to take it away. I´m not so sure if I think that it was such a great idea anymore..... I mean, I have put like 100 hours in the workshop and in the woods for inspiration to create all the things that we bring to the show, and now will people think that it is the scene of Necrocurse..... Hrm, well, well. But now you know that all the bone and skull-creations are ours! 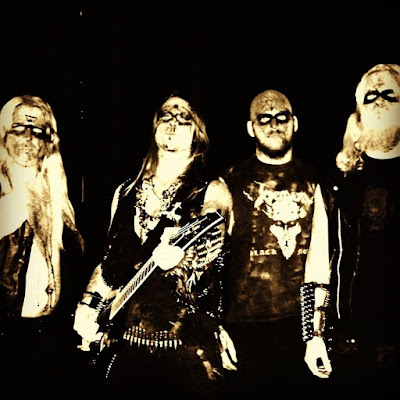 Voodus is very active not just with live shows in 2015 but You’ve recorded this Summer a four tracks’ material, called „NightQueen” and this EP has been released via Jawbreaker Records on tape and Heathen Tribes Records on CD digipack. Please, share with the readers all the important information about it! (I’ve listened all of your new tracks via soundcloud and I must to say, excellent job, my old friend!)
- The recording is just a demo, to be honest. We recorded it live in the studio with almost no money at all, just to have some new songs on print. Mostly for ourselves, you know to have a recording of the new material to listen to. But we was very satisfied with the result so we decided to release the material as a limited cassette through Jawbreaker Records, which is a underground label owned by a great guy (Gustav) from Gothenburg!!! The response for this first release by Voodus has been fucking great! And now the underground label Heathen Tribes Records will release a digipack-cd on the same material + The Burning Light Of Daath!

As I’ve red on Voodus fb-page, You’ll record your second full-length.. if You want, say a few words about it, maybe about the structures of tracks and lyrical conception...
- The complete album will be a tribute to the dark force of Lilith. NightQueen is just a taste of what to come (also dedicated to Lilith). All the songs that you can hear on the NightQueen EP will be re-recorded for the album + 6 more songs. We have like 3 or 4 songs finished at this moment, so it is a little bit left before we can enter the studio. But we will record two new songs this summer for a single! I can't tell you any details about the label yet, but it will be a fucking killer-label with the roots deep down in the cradle of true, black, sinister and dark magic music!

Tack så mycket, my old friend Tobbe! Hope to see You at live very soon near my area!  If there's anything you would like to add at the end of this conversation, please feel free to do it! Hail Voodus!
- Thank you! It´s always a pleasure to make interviews with you Georgius! Now, check out our Bandcamp, Soundcloud, Spotify, YouTube and/or Facebook-page for more music, merch and news! And don´t forget to order our EP,  NightQueen from Heathen Tribes Records!!!!
Hell the Dark Queen of the Nightside!
Hell Lilith! 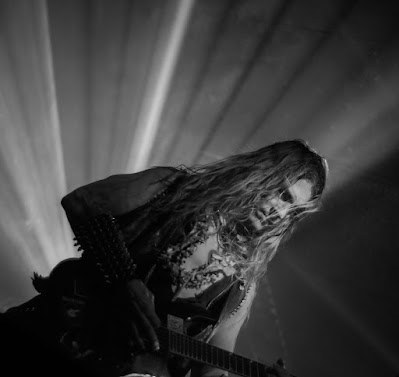 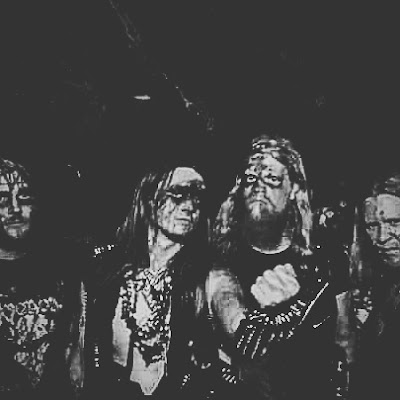