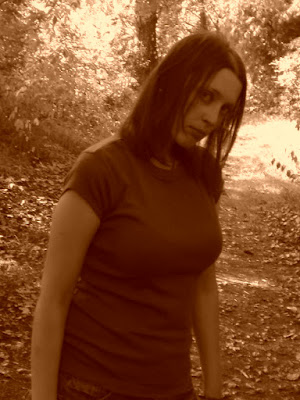 When and where did you born?
- I was on born on the 7-th of May, 1987 in Beregszász (Berehove) Transcarpathia (Ukraine).


As a kid who would you prefer to be?
- It’s a rather difficult question for me as my wants and needs have been changing almost every single day. At first, as every kid I wanted to follow in my parents’ footsteps, thus I wanted to work in the police department. Luckily, I’ve changed my mind very quickly. I also wanted to become a singer, a scientist, a writer, a doctor, etc.

What has been realized from this?
- Nothing so far as I’m still studying. But I can say I’m a little bit of a singer and a bit of a writer. 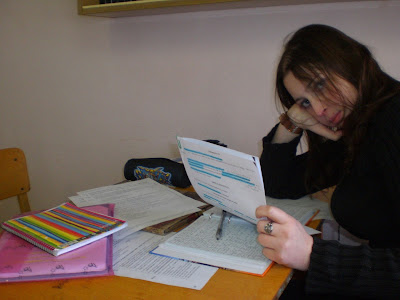 Your childhood's determinative album-experience?
- It’s hard to say now because my parents were rockers, they fed me with Pink Floyd, Black Sabbath, Deep Purple, Led Zeppelin stuff. I don’t remember lullabies, my mom and dad when putting me to bed turned on some of the above things.

What was the first concert you have seen?
- I guess I’ll avoid mentioning some minor shows but for one, back in 2006 I was at a gig headlined by Castrum. But the first greatest show I saw was Satyricon. 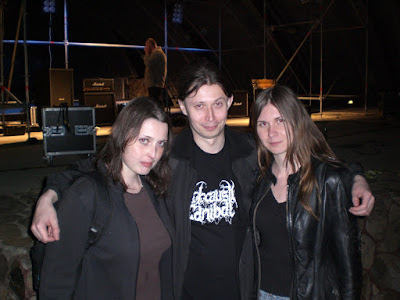 If you could compile a band without any limitation, who would play there?
- A very exciting question, in fact. If not to pay attention to the style and some other nuances, the perfect band would look like this:
Frost (Satyricon) – drums
Trey Azagthoth (Morbid Angel) – guitar
Ivar Bjørnson (Enslaved) – guitar
Reyash (Vader) – bass
Dead (Mayhem) - vox

What inspiration led you to this path?
- In my case the fact that I’m a small piece of the Underground movement is taken for granted. The only thing that can explain it is, to my mind, almost 22 years of constant development. 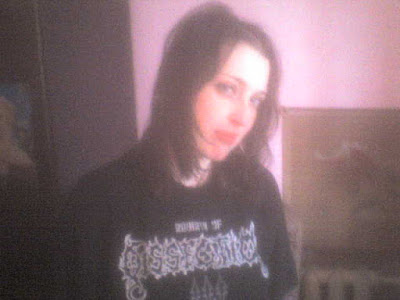 Do you have any hobby?
- Of corpse! First of all, it’s music. For me music embraces not only all branches of metal, I’m also fond of classical music, folk and sometimes some industrial tunes as well. I can’t imagine my life without books, travelling, photography and writing concert reports.

Ultimate albums of all time?
- Well, in my opinion, these are ”Blessed are the Sick” by Morbid Angel, “Necroticism - Descanting The Insalubrious” by Carcass, “Panzerfaust” by Darkthrone, “Storm Of The Light's Bane” by Dissection, “Frost” by Enslaved, “Epic (The Poetry Of War)” by Kataklysm, “Om” by Negură Bunget, “The Shadowthrone” by Satyricon, “Impressions in Blood” by Vader and “Forever Underground” by Vital Remains. 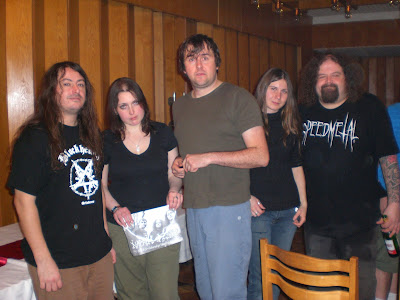 (Kate and Kat with Napalm Death-guys after their awesome show in Uzhhorod/Ungvár, I.23.2009)

Ultimate books of all time?
- First of all I would name the Poetic Edda, then go ”The Chronicles of Amber” written by Roger Zelazny, Goethe’s ”Faust”, all the fairy tales by the Grimm brothers, “One Flew Over the Cuckoo’s Nest”  by Ken Kesey and of course every masterpiece written by Edgar Poe.

Ultimate movies of all time?
- I’m not really into films but here I’d like to distinguish all those masterly works of Alfred Hitchcock, these are “The Birds”, “Psycho” and others.

Is there a life-philosophy or religion which stays close to you?
- Actually there is no but on my way up I try to follow the words of Alexander the Great,
”There is nothing impossible for him who will try.”

What is your opinion on illegal music downloads?
- It causes no problems for bands like Metallica, but because of this a number of bands and phenomenal musicians are facing “extinction”. They have to give up playing music due to the lack of financing. Thus we’re losing talented people. This is simply a kick in the face of the Underground. 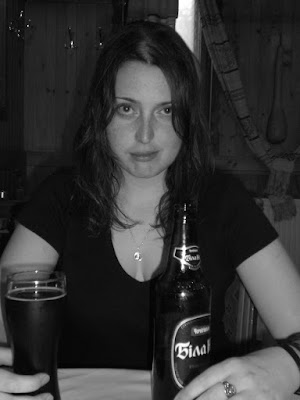 Favorite writer?
- Roger Zelazny, Oscar Wilde and John Fowles.
Favorite actor and actress?
- I have no as I’m not really interested in cinema and theatre.
If you would be 16 years old with such experience, what would you start to do with your life?
- I think I’d try to be more organized and maybe started my own Metal Zine.

What future would you predict for humanity?
- The whole human race will be eradicated by itself. I don’t think the situation will improve in the future. The ancient Romans used to say, “Homo homini monstrum”, which means “People are beasts to each other”. 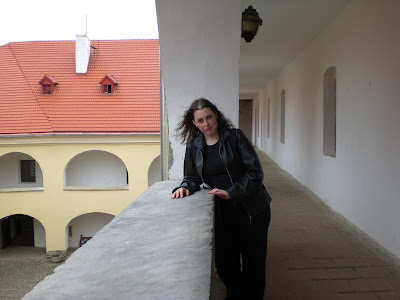 If there would be a question to yourself (that in your opinion was missed from the questions), what would be that? (Please answer it!)
- In what century would you like to live?
Either in the 15-th or in the 16-th. 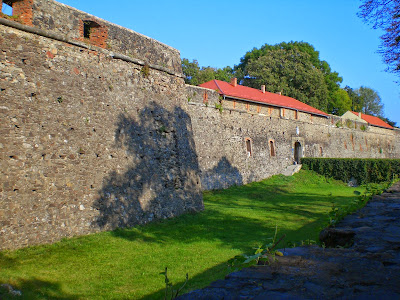 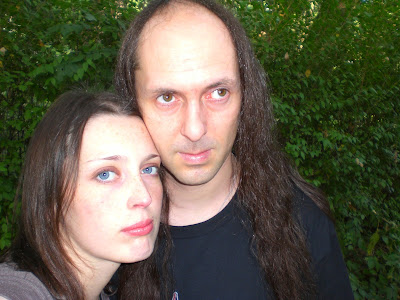 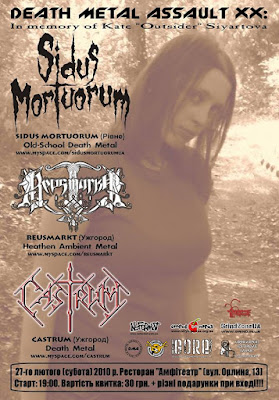 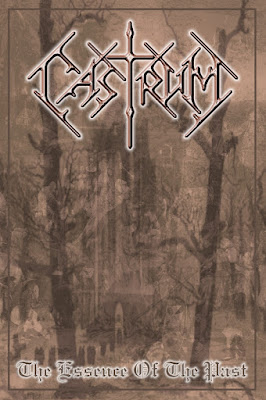 CASTRUM’s “The Essence of the Past” DVD was compiled by Cornelius from old archive shows and released in December 2007. The DVD is divided into three parts, these are: Scenery, Visionary and Imagery.
Scenery contains 3 live shows: live @ Animation Fest '96 (Beregovo, Ukraine), two live gigs @ Kathedra, both took place in 1997 in Uzhgorod, Ukraine. There is also a bonus live show from Hust, Ukraine in 1998. These live gigs are a backward look at the Transcarpathian metal scene anno 1996-1998. A very good way to compare the band as well as their fans with today’s situation. Those who had no opportunity to check out Castrum live 10 years ago can at least get an idea about what the band sounded and looked like.
The Visionary part contains three official video clips: “Tears of Eternal Expiation”, “Gilles de Rais (Le bon Sire)”, “Calvary Grandier”. By the way, these tracks are taken from “Pleasure in the Deeds of Horror” demo tape which was released in 1996. Unfortunately, these tracks haven’t been played live lately so young fans haven’t got a slightest idea about these great creations of Castrum.
Imagery features a photo gallery slide show of archive photos dating 1995-1998. You can have a look at the former members of Castrum and see the way Cornelius has changed during the past decade.
One can also find all the demos the band has released including “Burial of the Affection” (rehearsal 1996), “Flames by Impiety” (demo 1996), “Pleasure in the Deeds of Horror” (demo 1996) and two rehearsals of 1997 and 1999 respectively.
Have you ever heard of Chamos? It’s Castrum’s side-project with the same line-up. The guys experimented with Black metal and this way the “Hellish Reveries” demo appeared in 1997. The demo consisting of two tracks can also be found here.
This self-released DVD with such a splendid design will attract everyone. And your PC will be grateful as well for the DVD contains wallpapers for your desktop. All in all, this is when the dream of every single Castrum fan comes true! It’s the history of Castrum, the band’s development step by step. Note, those who don’t know the past, won’t have the future. Get “The Essence of the Past” or die in ignorance! Long live Death metal!!! 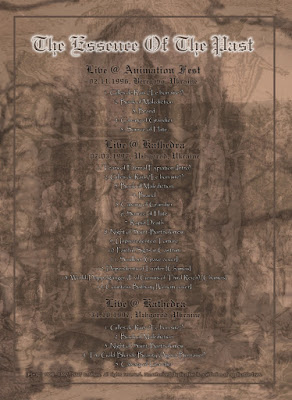 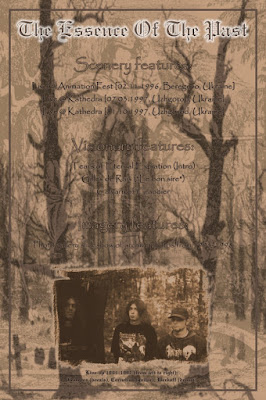