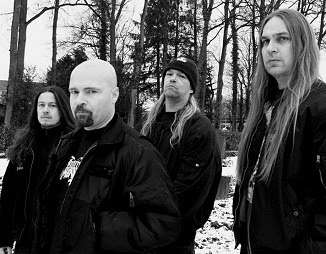 Hail to thee Bob! In 2007 ASPHYX was re-united again and since that time you delivered a lot of awesome stuff to the real Death/Doom Metal maniacs. How do estimate this passed time after your reunion?

- Hail there! Well, things are going good for us since the reunion. We did lots of cool shows/festivals, did brutal releases and caught up with old scene friends, which is awesome too!

After the "Live Death Doom" DVD Alwin Zuur replaced Wannes Gubbels on bass. What happened to Wannes? Can you share with us some info about his actual musical activity?

- We had different opinions so we decided to part ways. That was better for ASPHYX and better for Wannes. It was not easy, but it has become a fact. But we still talk and there is no bad blood, luckily. Wannes is a great guy with a great heart for metal. He and PENTACLE just did a split EP.

Last year you crushed us with a brilliant album called "Deathhammer". This one had a lot of good reviews worldwide and you also made a killer video clip for the album's title track. Tell us please about the circumstances of the clip-making.

- Yes, "Deathhammer" really did hit the nail on the head for sure! Well, the videoclip, it was shot in our rehearsalplace and was filmed and edited by Maurice from LEGION OF THE DAMNED who is a long time friend of ours. The clip came out good although I hate making videoclips a lot! I prefer liveclips. But Maurice did a great job and that all in 2 days!

It's really great to see, your good old mate, Eric Daniels' return to Death/Doom Metal again with the debut album of GRAND SUPREME BLOOD COURT and surely with an impressive line-up. As "Deathhammer" this album had and has a plenty of positive reviews as well. What do you think when will you continue to write new tracks for GRAND SUPREME BLOOD COURT?

- Yes, it's good to see my best buddy Eric returning to the metal again, for sure. Yes, we will be writing new material for GRAND SUPREME BLOOD COURT, but not now since the debut just came out. ASPHYX is the next band, we are focusing on for 2014. With GRAND SUPREME BLOOD COURT it was a matter of very short rehearsing and just go into the studio and record the stuff! It came out very good, spontaneous and brutal.

How was the reception of fans at your first live-show with GRAND SUPREME BLOOD COURT? Will you think about the release of a live DVD in the near future?

- That was very cool. The show was in the South of Germany. Unfortunately, MOTÖRHEAD was playing in the area with ANTHRAX, so there were only 250 people at our show, haha! But it was great nevertheless! Great response there and loud as hell. I don't know if GSBC will release a live DVD, but it should be cool anyway. Time will tell.

You played drums in EVOKER together with Theo Loomans (R.I.P.) and also in THRONE in the 90s. Tell us shortly about this period!

- Yes indeed. EVOKER was a total HELLHAMMER/BATHORY tribute, were we also covered "Massacra" from HELLHAMMER on that reh/demo. We also did BATHORY's "Born For Burning", but that was not recorded. Both Theo (RIP) and me were very serious with it, but ASPHYX was the main band, of course. THRONE was a project from A.J. van Drenth (BEYOND BELIEF) and me. We did "The Ultimate Blasphemy" demo in 1995. THRONE was inspired by old MESSIAH/BATHORY/CELTIC FROST. It was cool to do. We still have contact.

What releases were your favorites out of the 2012 year?

- Hmmm, DESASTER - "The Arts of Destruction" and the SERPENTINE PATH debut.

What is your opinion about the Dutch Death/Doom Metal scene nowadays? Any recommendations?

- Our scene is very strong yet again with great new bands such as BODYFARM, NAILGUN MASSACRE, ENTRAPMENT, FUNERAL WHORE, EXTREME COLD WINTER, GRAND SUPREME BLOOD COURT, HAIL OF BULLETS, and the oldies such as SINISTER, ACROSTICHON and of course ASPHYX. It is a healthy scene. 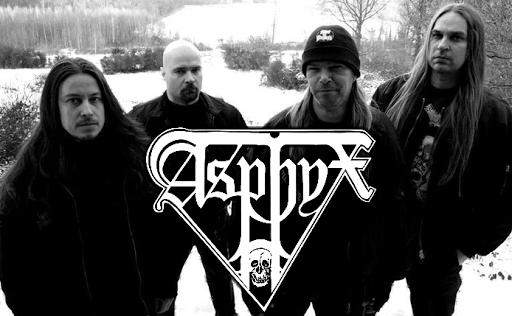 Do you like to watch Formula-1? If yes which racing-driver(s) do you prefer?

- Yes, I am addicted to Formula 1. I also go to races with my wife as well and take my kids to the free practice on Friday. I love the enormous speeds and the ultra brutal sound from the cars. Louder than anything else! I used to prefer Mika Häkkinnen (my youngest son is named after him), also because he drove for McLaren-Mercedes, then after him it was Kimi Raikkönen and now it is Lewis Hamilton. But I am a teamman and not a driverman. I always was fan of McLaren-Mercedes, but since Mercedes has its own team now I support them since I am a fan of their streetcars.

Do you have any favorite movies? Tell us a little bit about your hobbies.

- Yes, I'm a huge horrorfan and with horror I mean the late 70's and 80's kind of horror. My favorite movies are Evil Dead, The Texas Chainsaw Massacre part 1, Zombie Flesheaters, Phenomena, House by the Cemetary, The Beyond, Tenebrae, Dawn of the Dead, Day of the Dead, New York Ripper, City of the Living Dead, Intruder, all Friday the 13th 'til part 8, Last House on the Left, etc. My hobbies are Formula 1 and horror movies and take a long walk in the woods with my 2 sons, enjoy the nature and do some fishing in the rivers here with them.

Do you plan some extensive European tour with ASPHYX for the near future? Would be really great to witness live the obscure Death/Doom power for example in Ukraine!

- No, ASPHYX does not do any tours anymore. We did 2 great tours in the past, 1991 with ENTOMBED and in 1992 with BOLT THROWER and BENEDICTION. Today the day we only do single shows and sometimes 2 in a row, or 3 like Extreme Fest last year with EXODUS and SUFFOCATION, but that's about it. But as a matter of fact, our booker from TMR Promotion was talking about a possible ASPHYX show in the Ukraine indeed. So we might do there a show in the future. I really hope so!!

Bedankt Bob, wishing you all the best with ASPHYX and GRAND SUPREME BLOOD COURT! As Grand Magistrate Bagchus please send a message to the readers of Encomium...

Ah, you know a little bit Dutch, eh? Great! So I say "Geen dank,graag gedaan". To all readers of Encomium, thanx for support, keep supporting and hopefully see you in the Ukraine sometime! 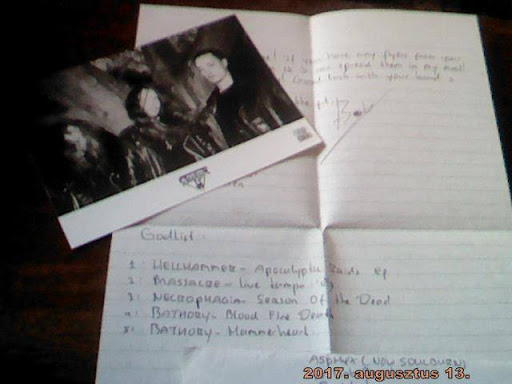