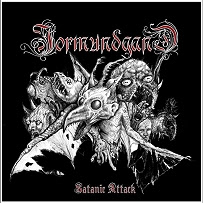 Hails! To my mind, the name you chose has a lot to do with your music. How did you hit on an idea of choosing this name?

- The name came naturally to us because of our origin and it was also an appropriate name due to the kind of music we create. JORMUNDGAND is the counterpart to Leviathan/Tad-Ekam and represents "our" Northern dragon of Chaos.

When I listened first to your music early DISSECTION crossed my mind. I've read on your site that guys from NIFELHEIM helped you to cope with the recordings of your demo. Please, tell me about its process in details.

- Well the thing is that Hellbutcher is a very good friend of ours and when we had finished the instrumental recordings we asked him to do some background vocals on the track "Satanic Attack". So he did, but that was also all he did so you can't really say that we made the demo with help from NIFELHEIM since it was Hellbutcher only. He has done a lot for JORMUNDGAND; for example the demo cover art and our logo, which we are very grateful for.

And it has to be said that it's a great honour to be resembled with DISSECTION!

You come from Uddevalla, could you please tell me about the local metal scene and the musicians/bands from Sweden you are in contact with.

- The local scene is unfortunately quite dead in this part of Sweden when it comes to black metal. There are very few bands in the genre that we respect for their music and their ideals and because of that our relations with other bands are strictly limited.

What is JORMUNDGAND's current line-up and do the members of the band take part in other projects?

- The current line-up is: Tobias Fongelius (guitars & vocals), Erika Hansson (guitars & piano), Tobias Pettersson (bass). Tobias P. is also playing bass in two other bands; RAM and VORNTH. Our drummer has got some projects as well but we can't say his name yet since he is not an official member of JORMUNDGAND.

I would also like to know about your live activity, where and with what other bands did you play?

- We won't play live until we have found the right individuals for the band. This has proven to be a huge challenge.

Apart from playing music, what do you do in your everyday life? If any of you happen to have a hobby, please, tell me about it.

- Well this was a very tricky question since we've got such different hobbies. But some interests that we have are: studying Satanic literature and art, collecting records and merchandise, photography and preparing as well as arranging bones and skulls. 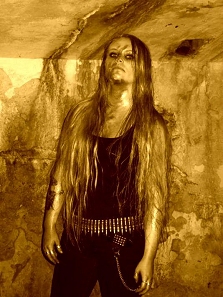 I know that you are fond of reading books, would you please tell me what are your favourite ones? I'm also curious to know your opinion about Liber Azerate.

- Tobbe F: "I would rather not to tell which books I prefer since it's a personal matter. As an answer to your question and without going any deeper into it I can say I find Liber Azerate very interesting and instructive."

I was very pleased to find out that Jon Nödtveidt (R.I.C.) is your hero as well as mine. From your letters I've got to know that you didn't know Jon personally, but what do you think of him as a person and musician?

- Tobbe F: "Jon is One of our great sources of inspiration, both musically and spiritually. His music is eternal perfection and his legacy shall never be forgotten."

Hail the Bloodline of Fire! 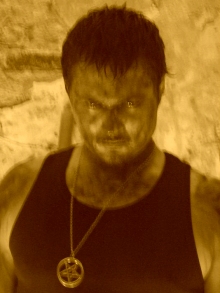 Could you please name 5 of your favourite albums?

- This is a really difficult question since there are so many albums that are of great importance to us. But to mention a few albums: DISSECTION – "The Somberlain", WATAIN – "Sworn to the dark", NIFELHEIM – "Servants of darkness", MAYHEM – "De Mysteriis Dom Sathanas", BATHORY – "Blood, Fire, Death", EMPEROR – "In the Nightside Eclipse", MOTÖRHEAD – "Sacrifice", JUDAS PRIEST – "Defenders of the Faith".

What are the band's plans for the future? I hope to see you live in Hungary or in Ukraine shortly, though it wouldn't be a bad idea to play on one stage with you. Do you know any Ukrainian and Hungarian bands?

- First of all we are going to record a 7" single with two killer tracks this spring. That is the main project for the moment.

Bands from Hungary and Ukraine that we know are TORMENTOR, POKOLGÉP and NOKTURNAL MORTUM. And then we also have CASTRUM and DOMHRING.

Tack så mycket!!! It was a pleasure for me to ask you these questions. Would you somehow sum it all up?

Thanks for the support! Keep your eyes and ears open for our next release.