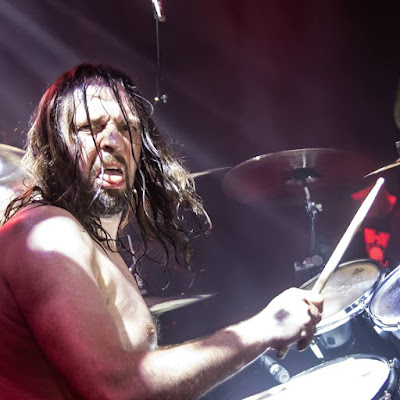 Hail to thee, Wim! Your new album “Stigmata Me, I'm In Misery” will be out this month through Hammerheart Records, but we already had the chance to listen to it at your label’s Bandcamp profile. It became simply awesome. What are the responses to it from the fans and the media so far as well as to the 7” EP, “I am Sick, I must Die”, which was out 15th of September, 2017?
- Hail to thee also G. and C., thanks for questioning me. " “Stigmata Me, I'm In Misery” is out a few month now and the response is overwhelming so far. Hammerheart Records is doing an awesome job promoting the album and we get reactions from just about everywhere. Since last December the promo pack is downloadable through the label's promo- channels and lots and lots of magazines and other reviewers did so. Most of them wrote absolutely AWESOME reviews, and of course some didn't haha. In general we get good grades and we hear that it's a very welcome successor to "Walpurgis - Sabbath of Lust". We also hear that we haven't changed style and still sound like it's somewhere in the nineties, which we like very much (and something we knew ourselves of course haha)  Same goes for the 7", overwhelming responses and even a few people that were surprised we came back after such a long time. But here we are...

Tell us please, how the recording process for your comeback album took place? How long did it take to record it? Whose idea was to cover the classics of Merciless and Sabbat?
- Recordings took place in April, May and June of 2017 at the Toneshed Recording Studio of Erwin Hermsen; former guitar player for Inhume among others. He has a studio near his home, it has a very warm atmosphere and we felt really comfortable over there. For most of us it was a long time ago since we recorded in a studio, so most of the digital stuff was new, but it all worked out fine. Of course we took way too lang to record all songs, also because we recorded some extra stuff; like some covers for the 7" and other promotional purposes. The Merciless and Sabbat songs were in our live set in the nineties, so therefor we recorded them as well. The studio-boss came up with the idea to record the Dark Angel track cause it would fit our other stuff; so we taped that one also. This was a big challenge 'cause I never played that one and had to learn it while my kit was in the studio, so only played it on my air drum kit.  On the recording day I played it only twice before we recorded it but it also worked out quite well I think.

As it is already known, the lyrics built upon Alex’s personal life experiences. So the question rise, does the lyrics of “Stigmata Me, I'm In Misery” conceptual in any way? The cover artwork displays Alex allegorically crucified on the cross. Was it planned from the start to have such a realistic illustration on the cover or you were thinking of having a traditional painted cover?
- Actually, it is just a part of the lyrics that deal with his personal issues, not all of them so it's not a concept album. We would not have been Inquisitor if we haven't written lots of anti-christian songs of course. Alex had lots of health issues and other physical problems due to his lifestyle as well as being worn out by his work. At the moment he is doing OK. In spite of having a lot of backfire from old times, he is getting over this and is doing better day by day now. He wrote some awesome lyrics about his issues and we thought we better made that the main source of this album. So, because of this he had to be on the cover of course, painted or otherwise. This cover idea was planned from beginning and indeed we tried tot made a realistic illustration first but that didn't work out. The awesome picture of Elsabijn did and we all are very happy with the result. 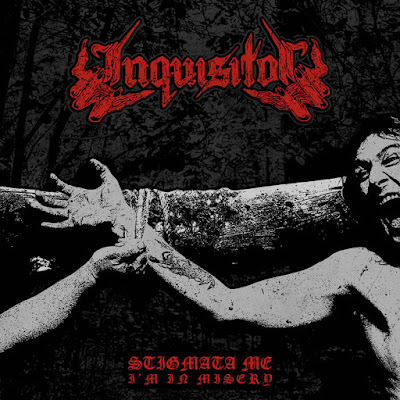 One can notice the fragments of Prokofiev’s famous “Dance of the Knights” used in your intro, but what should we know about the second introduction for the song, titled “Northern Goliath - Death A Black Rose”? Who did it?
- Well, i am guilty of making the in- and outros. We were looking for a little intro that suites the first song and Alex B. came up with this tune. I lowered the speed a bit and added some lovely whipping to it to make it suit even better. It worked out very well I think. It has no deeper meaning or whatsoever. The intro for "Northern Goliath..." is taken from the same song and here I added some Evil Dead pieces to it.

Do you remember when your first acquaintance with the musical instrument called drums was? Do you play or own any other instruments? Which drummers influenced you at the beginning and what drummers are the most favourite of yours lately?
- I have been playing the almighty air drums since a very young age and traded my air drum kit in for a real one only at the age of 19 when I immediately started playing in my first band together with Erik. Next to these air drums I also played air guitar, air bass and air mics, and still do but never cared to get into the real deals. My biggest and earliest influence on both air drums and drums are; Alex Van Halen, Clive Burr, Robb Reiner and Dave Lombardo but got into the fast stuff of Pete Sandoval and Docent very soon. I also like Tommy Aldridge, Joe Cangelosi, Gene Hoglan, Richard Christy, Derek Roddy, Aquiles Priester, Bobby Jarzombek  to name just a few.

You’ve had quite a lot of shows during the past year. How do you see what has changed in the nowadays underground fans’ worldview compared to the ones you’ve seen for example in the first half of the 90s? For instance, how the fans’ reaction (talking with the members, buying some merch, keeping in touch afterwards, etc.) look like after an Inquisitor gig today? Do you satisfied the way it looks now?
- Starting with how different things looks nowadays; we look old haha. Most of our hair is gone and we look a bit like old men behaving badly, with our glasses and beer-bellies. But when our music starts you think it is 1990 all over again!!! We aged well I think but play still the same kind of fast aggressive stuff we're used too over 25 years ago. The underground scene has changed but not too dramatically. The biggest change is the digital way of discovering and even making music. Another change is that lots of fans are of age these days, like we are. It looks like the hay-days of metal are still the 80s and 90s and most of the fans grow with it. But the overall reaction from fans to Inquisitor, our music and ourselves is merely the same, and visa versa. After our shows we always drink a beer with our fans and/or chat about the gig at our merchstand. As it always was and how it should be, and that is how i like it. 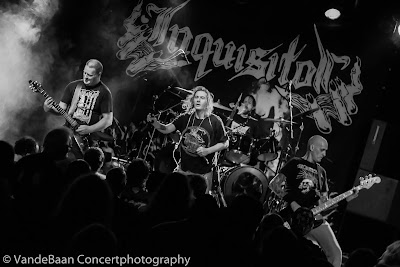 For the 7” you’ve selected a great painting by Pieter Brueghel the Elder. It is known that the Low Countries are rich by famous painters. Would you recommend us a few museums and galleries of art from your land? Do the fine arts of the Netherlands attract you and if so, which are those?
- We have some great musems here, like the "Rijksmuseum"  in Amsterdam, with Dutch art and history from the Middle Ages to the present day. Also the "Van Gogh" museum and the "Mauritshuis" are worth spending some time. I am not an art fanatic, but sure can appreciate some nice dark paintings from the ones like Brueghel, Jeroen Bosch, Salvator Rosa for example. I don't like modern art but do like some Escher stuff. 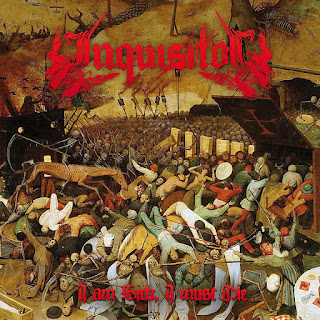 What is the actual situation with the forthcoming Sammath full-length and its future live performances?
- We just completed the first awesome series of gigs in the Netherlands, which all worked out great. Even recorded some few nice videos of those shows and one of them will be released on tape by Zwaertgevegt in the next few weeks. We played festivals with Dutch Black Metal bands like Lugubre, Standvast, Ibex Angel Order and Grafjammer as well as foreign bands like Dark Funeral, Isvind, Ancient and Akercocke. At the moment we are working on new songs for the forthcoming album; these are the first Sammath songs that I am playing the drums on and you can guess the result if you know me.... But triple or quadruple this and you get an idea of what we are working on. It will take some time but I'm sure nobody mind 4 years since "Godless Arrogance". It will be a shocker !!! 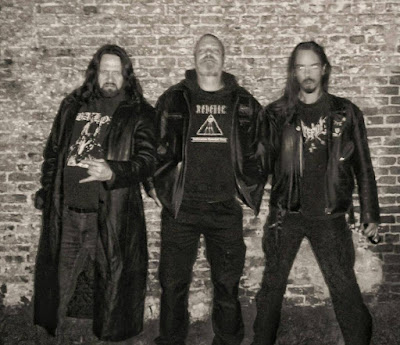 When you are along with your family and/or friends/band-mates, which are those places you are visiting with pleasure to get some foods and drinks? Any local specialities you would recommend to us hereby?
- Next to my family life, my busy job and my two bands with weekly rehearsals and gigs there is very little time left. I'm happy even to spend some time on my couch, or sometimes a local gig. In my hometown are no mentionable places, so if i go out it's to of to cities like Amersfoort, Utrecht, Arnhem or even Amsterdam and Eindhoven. For gigging in the Netherlands you best go to The Baroeg (Rotterdam), Dynamo (Eindhoven), Little Devil & 013 (both in Tilburg), Willemeen (Arnhem) or Hedon (Zwolle) among many others.

If you look back to the releases of 2017, which ones will you pick up as your beloved materials?
- To be honest, I'm more focused on old stuff and very busy with my own bands, therefor I don't have much time left to follow the scene very closely. However, here are just a few releases that I like from last year:
Immolation - Atonement,
Dead Head - Swine Plague,
Kadaverdisciplin - Death Supremacy,
Exhumed - Death Revenge,
Hellripper - Coagulating Darkness,
God Dethroned - The world Ablaze,
Azarath - In Extremis,
Beheaded - Beast Incarnate,
Sinister - Syncretism,
and of course Neocaesar - 11:11

just to mention a few ;)

Thank you very much Wim for taking the time to answer our questions! Please complete it by sending your final thoughts to the readers of Archangel’s Lantern.
- Well, thank you for questioning me about my bands, my music and me. I am getting very close to 50 but try to continue the extreme music for some more years. Expect new Sammath music within a year from now and also new Inquisitor stuff is in writing. Till then I hope to spend more time on stages here in the Netherlands and abroad. Keep focused on our FB pages and websites so you won't miss a thing. Cheers G.  and C. for all promotion and nice contact. Never change!
Grrrrr Wim & INQUISITOR / SAMMATH 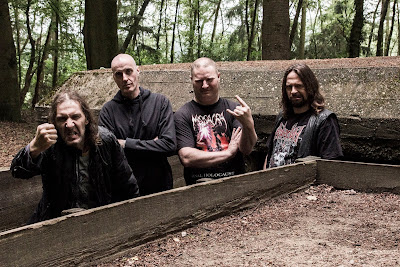