English version of the Soulburn interview,
done back in  09.II.2017.
Interview with Eric Daniels committed by Alister of Atmosfear.
Originally published in Atmosfear magazine in Russian language, 2017. 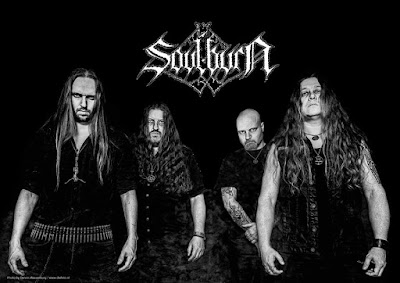 Hail to all members of great Soulburn! So Eric, congratulations on completing work on a new album! What is your general impression of this record?
- Thank you very much! Not only mine but all of us we like the new album very much, we worked about one year to complete this one, the result is very satisfied for us. To us it’s the perfect continue album after “The Suffocating Darkness” album.

"Earthless Pagan Spirit" is quite intriguing title. What meaning you put into this title?
- Earthless: Beyond this world
Pagan: Beyond god
Spirit: At one with the cosmic foreverness
This meaning connected to our music gives the right atmosphere we wanted to spread around.

The release of your previous album "The Suffocating Darkness" was scheduled for November 17, the new album release is expected on November 18 - it's just a coincidence or some kind of cyclicality in the bands history? ))
- Sharp notice you have. Yes it was planned this way and also Century Media Records had the release in mind to do this. It’s the right season of the year to release an album, just before winter time! Atmosphere and surroundings.

What should we expect on "Earthless Pagan Spirit", and what is its basic concept?
- Our goal was to make this album more dark and evil, the style we like. Also making the songs bit longer for the right feel. This album has more doom covered, and the structure of the songs is like the whole concept. Every song is connected towards each other so the whole album breaths that kind of dark atmosphere we had in mind. We also believe that with this album we give a true face towards what Soulburn stands for. Dark, black, doom, death.

In general, the album title and its cover evoke associations more with Black metal than Death metal. To tell the truth, on the previous album apart an old school Death metal can be heard the elements of Black metal in terms of sound, some riffs and vocal. Can we say that on the new album you decide to pay more attention to this part of your music?
- Yes as I mentioned in the question before, we wanted to show the real face of Soulburn. Back in 1996 when I had the idea to form Soulburn, what you hear on this album was the whole idea for this band. Dark, Black, Doom, Death. All those ingredients you will find in this one, so we are very happy with the final result. This new album breaths more black indeed, but that’s what we felt to do, and make the songs this way. 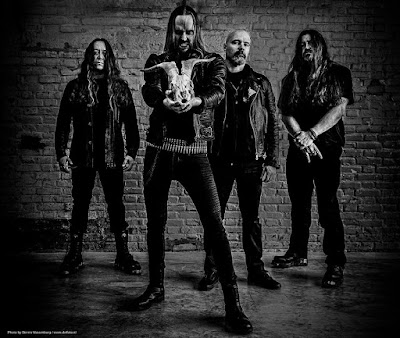 Why this time you decide not to seek the help of Dan Swanö for mixing? Did you want to make brand Netherlandish sound without Swedish flavor?
- It still has Swedish flavor. We decided to work with Devo (Marduk) at his Endarker studio in Norrköping Sweden. Bob and I went there for a weekend when Devo was mixing our album. When we arrived at his studio he already had the mix done, it sounded awesome, so, we are very happy with the result. We like his work very much as he did with the Marduk albums. For us he is the perfect engineer for our music. He also mastered the album.

Are you satisfied with the work with Century Media Records? Personally, I think that for a band like Soulburn it’s a great label, given its catalog (my favorite label, by the way). I believe that this label has kept its concept and connection with the roots, that’s why even in today’s label catalog we continue to feel the spirit of those legendary albums that have been released previously, since the 90's. Is not it?
- Century Media Records we are very satisfied with. Bob and I we know them for a along time since 1990 at the beginning of Asphyx. We have a very good relationship and they do a great job for us. It’s really important to have a good back up from the record company. Yes they have an old school opinion about bands from that era, bands which all began with.

A personal question about your bass/singer Twan van Geel. He has played and still plays in many bands besides Soulburn: Legion Of The Damned (special respect!), Bunkur, Flesh Made Sin, Verbum Verus. And he plays on the bass guitar, drums, guitar and vocal in all of these bands. How he manages to combine all this? Is he a regular member in all these bands, or just a session member in some of them?
- It’s all about the good organization and appointments. He can manage and does that very well. We had an agreement from the start since he has commitments with LOTD. We have a professional approach so we manage this. In Soulburn and LOTD he is a steady member, full time member.

Now let’s turn to mega cult band Asphyx. To begin, I ask you an uncomfortable question. Now you play together with Bob Bagchus in Soulburn.  That is, it is not just 2/3 of Asphyx, but just you two have invented the classic Asphyx sound! I think this situation is a little strange when you exist along with Asphyx with the only original member in line-up... Or maybe Asphyx now is a “branch” of Soulburn, its subsidiary? And you have plans to create in the future “Death metal concern” of current and former members of your bands? ))
- Well, things went how they went. Asphyx and Soulburn are separate full bands, no “branch” or other strange names for it. We play different kind of music, each of them follow their own path. We are friends along, and we bump towards each other on festivals ect. No plans, we are both busy with our own bands. 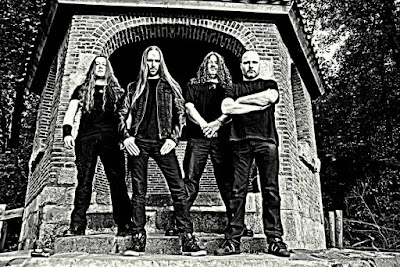 By the way, how often you contact with Asphyx now? How do you like their new album "Incoming Death"?
- I sometimes grab a beer at Martin’s place, we both live in the same town Oldenzaal here in The Netherlands. We like to listen to the old heavy metal 80s era, and drink some nice beers and talk about everything. Yes I listen to tracks from “Incoming Death”. Well played, my respects, and I like what they are doing.

Do you have plans for join performance Asphyx/Soulburn?
- No plans, but in music-land, everything is possible.

Tell us about your split album “Imperial Anthems No. 17” with Desaster. Whose initiative was to release it and what is your opinion of this band?
- We had the idea to do a split 7”. Cyclone Empire did a great job, and CMR also liked the idea. Desaster is cool, stick to their roots and I like the pure old school attitude. That’s why we liked it to join on the 7”. “Monuments of God” we also did another version of this song on our new album as bonus-track, so it’s not their exact copy you listen too. We like the idea to have something special into the 7”.

Tell me, when did you decide to become a professional musician? Was there any album or a band that have influenced your decision to become a musician?
- Yes back in the 80s when Venom’s Welcome to Hell was released, I knew that I wanted to play the guitar aggressive like Mantas did. This band and his playing was my biggest inspiration. I play guitar from my 14th year so almost 36 years I play guitar now, and I still like it very much to do.

Do you have a wish to come and play gig in Russia, Belarus and Ukraine?
- Yes of course we want to play in those countries. If the conditions are good, we come over and play. It would be awesome to do.

Maybe you want to add something to the above, or some greetings to your fans?
- Thank you very much for this interview and towards our fans reading your magazine we say, when we come over and play, we give you the Soulburn you expect and want. YOU Rule!!! 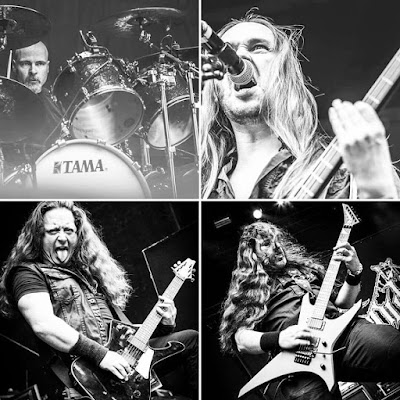