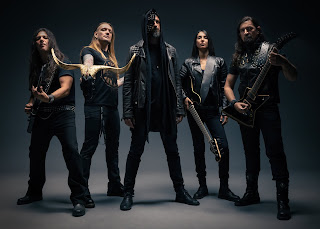 Hail my respected Greek brother Efthimis, I’m so honoured to make with you this interview. I’ve started to listen to Nightfall in 1994 (with “Macabre Sunsets” album) and since that time I’m a big fan of you.

Efthimis: Thanks a lot my friend. Best thing music can offer is good friendships. This is the real wealth.

I wanted to ask you a lot of questions about the past but I’m focusing now to ask you in details of Nightfall’s “At Night We Pray” LP.

Efthimis: I understand. It is very important to talk about the past, but the present is what we live now.

After the long silence Nightfall recorded a new album. How did happen the recording process and tell me please about your current line-up. It’s great as your old guitarist Mike Galiatsos joined the horde again. Enlighten the readers about circumstances of his return.

Efthimis: In 2017 Mike called me and told me he wished to rejoin the band. I told him I am having a great time with the The Slayerking right now, and see no reason to release something new with Nightfall. Unless, we wanted to tell a great story: A year after I got to know about my depression and that was a great one to share with people. Especially young people who feel like rejected or stigmatized by a society that thinks it is healthy, but it is sick as hell.

Kostas Kyriakopoulos, your band-mate of The Slayerking joined Nightfall as well. How was this awesome alliance?

Efthimis: Indeed, it is great to play with people who feel like family. It is very important to me to be surrounded by people I like. It saves me from wasting time trying to explain the same things over and over again.

I’ve been very happy when I’ve heard as ex-Septic Flesh drummer Fotis Benardo started to play with you. How did occur that fraternity between you? Were there any other candidates? Did influence you his arrival to the band as Nightfall used again blast-beats and played live fast tracks from second and third albums?

Efthimis: Nightfall has influenced Fotis Benardo way before he joined Septic Flesh. He was a fan and almost about to record Diva Futura back in 1999. It did not happen then, it happens now. We are a great team. And very strong live.

Did you want to invite to Nightfall back original members Christos Adamos and Dimitris Agelopoulos or Kostas Savvidis?

Efthimis: They are doing their own stuff. It would be nice to go up on stage and do to an anniversary show altogether. Yes, that would be cool to do someday.

How did you write the tracks to your new album and who has been the main composer? Wish songs were ready at first? (Nightfall used again the original logo)

Efthimis: As usual, the entire team works together. Me and Mike brought most of the riffs and then we sat down with Fotis and worked collectively. To me it is very important to have everyone in the band contributing. This is the best. Otherwise, it’s only one man show with session musicians. Team work is always the best. Nothing can complete the genius of many brains together, when aligned. First song was Agita. I wrote the lyrics after my mother’s death.

I had fortune to listen to demo-version of "Martyrs of the Cult of the Dead (Agita)" on your smartphone. (I liked a lot that one and I’d like to note it has happened on backstage after The Slayerking show in Budapest). You told me secretly the return of Mike to band and I’ve been so glad because as for me he was strong part of Nightfall back in the day. It was Fotis Benardo at the same in your line-up or someone else recorded the drum-parts?

Efthimis: Yes, I remember that day. And the place was nice. I recall our nightline driver got shocked because we invited you to seat with us inside his bus. I understand his stress. It was his responsibility. But, hey, that is the difference between now and the past. Tours were made mostly to go and play to friends and fans in places and spare time and drinks together. Those were the days. Now, it’s more about professionalism and rules. No, Fotis was not behind the drums in that demo. It was Jörg Uken, from Soundlodge studios in Germany, who played in Astron Black and Cassiopeia albums. At that time he was in the band officially, so he did the drums. Fotis liked his patterns so he recorded the song in similar way. 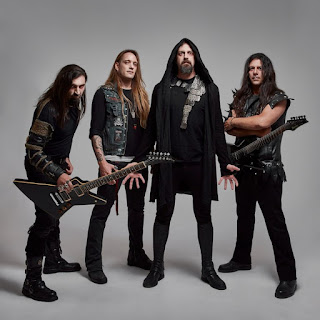 I know that Nightfall planned a big tour through Europe but because of pandemic it will be next year. How many times do you rehearse and which tracks will you play live then?

Efthimis: It’s true, with Draconian. The tour is now scheduled for March 2022. We can’t wait to hit the road. Songs will be a selection from At Night We Prey and older stuff, including picks from Athenian Echoes and Macabre Sunsets.

Tell more about the lyrics (track by track) of “At Night We Pray”.

Efthimis: The entire album is about depression and how people who struggle with it are treated by society: Misconceptions, stigmatization, bullying and isolation. Killing Moon is about the absence of help; Darkness Forever is about how inner light is sucked by absolute blackness within; Witches are the furies who you feel they come to punish you for every wrong reason on earth; Giants of Anger is inspired by Wilhelm the 2nd, last emperor of Germany who was born handicapped and his mental health was totally affected by how his mother and people treated him – his example used to show people that mental disorders make no discrimination on race, social status, sex or anything - they hit everybody; Temenos is about the role of religion in subjects like depression; Meteor Gods is about the divine powers, whoever they are and if they exist after all, that totally fail to save us from this mental state of mind; Agita is about mother loss and the stress this causes; At Night We Prey is about the collective change we must do in how society deals with depression; and Wolves in Thy Head is about lone wolves whose mental health is so fucked up they can cause harm to others because of whatever reason.

On your new material have been guest female vocalists namely Suzana Vougioukli and Eleni Vougioukli. Let’s talk about this cooperation.

Efthimis: Old fans, great ladies, and absolute performers. I am so grateful they have participated in our album. Next step is to share the stage with them.

Your band has 3 lyric videos: "Darkness Forever", "Killing Moon" and "Giants of Anger" for newest album. Likewise an excellent video "Martyrs of the Cult of the Dead (Agita)" (my favourite track from “At the Night We Prey”). Share with the readers clip making process and about women who have participated there.

Efthimis: Agita is a great video that shows the fight of a person with depression. Like in the album cover by Travis Smith, depression is displayed in female form. Regretfully, YouTube blocked the original version due to violence and nudity. We tried a censored version, it was accepted, but refused us the option to promote it. Hence, the video is up there, censored, to be seen only if someone searches for it. To put it mildly, this is the way society treats people who struggle with mental disorders. It puts them somewhere, not to be seen or heard, unless someone searches for them.

It’s just awesome as you played on your rehearsal room 2 tracks taken from "Macabre Sunsets" and "Athenian Echoes". Who was the bass player on that stuff and why he did not join the horde? There were recorded any other songs from different albums?

Efthimis: The bass player was a friend we asked to participate, as our current bass player Vasiliki was not ready at that time. It was a great session. I think we did Iris (And The Burning Aureole) too.

How long did you record your new material in в Devasoundz Studios? You recorded all the bass-parts but nowadays in your line-up is Vasiliki Biza. Who is she and how did you meet her?

Efthimis: Vasiliki is a New Yorker that stays in Greece and she is very active in the Punk scene. Her nerve and tone are awesome. Definitely she is the best for the bass duties in Nightfall, and that shows on stage. The album was made in three studios; two in Greece and one in the UK. We worked a lot and very hard to complete it.

Your label Season Of Mist re-released on vinyls and CDs all the albums which ones Holy Records released back in time. I waited to read lyrics on re-released "Athenian Echoes" but unfortunately I could not find them there. When the fans of Nightfall could find those lyrics?

Efthimis: That’s a good question. I think we have to release them someday. The reason why re-issues came that way, it’s because I wanted to be as close to the original as possible. That way, old fans will recall the memories of those times, and new fans will get the real thing without discounts or modern adjustments. I think it worked.

On the 13th of November it will be Nightfall show in Athens after the long break. You will play a special set? Will you have a plan to release live-album (CD / DVD) in the near future?
Efthimis: We gonna take it in video. I don’t know if we gonna use it officially. But it’s good to have it on video. The set-list will cover all four seasons of Nightfall career, with At Night We Prey in priority of course.
Thanks a lot / ευχαριστώ πολύ! Send your thoughts in the end to complete this interview to the old and newcomer fans of Nightfall.
Efthimis: Thanks Andrey for your devotion, inspiration and good support all these years. People like you keep the scene rolling!
Follow Nightfall:
nightfallofficial.com
facebook.com/nightfallbandofficial
nightfall-cult.bandcamp.com
nightfallofficial.bandcamp.com
instagram.com/nightfallband
tiktok.com/@nightfall_band_official 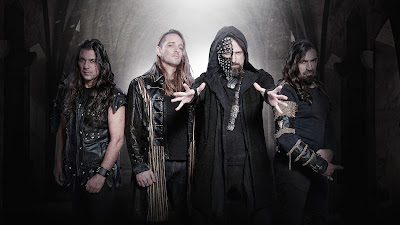 At Night We Prey on spotify:
open.spotify.com/album/4mTRLQhinfCrh4qLB0acAN