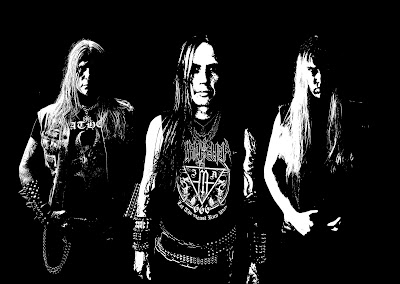 Hail Sebastian! First of all my congratulations to you for the awesome  In Aphelion ”Luciferian Age” EP, I enjoyed every moment and Kreator cover namely “Pleasure to Kill” is absolutely brilliant and one of the best Kreator covers I listened to it ever. Would you be so kind to tell the readers all the important information about EP? (songwriting process, lyrics, cover artwork and videos “Draugr” and “Luciferian Age”)

Sebastian: I started this as a project during the first lock down in the pandemic. I felt that I had time to write something else than music for Necrophobic. The most important thing was that I was not really tried to shape this to fit in within a concept. I just followed the flow and let the music come to me. I had four of five songs when the words started to come. I don’t sit down and decide what the lyrics should be about. Usually a few lines that fit the music just pops up in my mind and I go from there. They are overall quite personal. I go from myths or religious believes, or rituals that I find fascinating. Then I try to put my own thoughts and even my own life in the perspective of the lyrics. For instance the song Sorrow, Fire and Hate that is about crossing the rivers to enter the kingdom of death is also about ageing. It’s about getting stuck without development. I wanna grow. I rather go through sorrow, fire and hate than being stuck doing the same thing over and over again. Put at the same time those are the names of the rivers you have to cross in the Greek mythology to enter the underworld. The cover art I did myself. I think I wanted to express myself on as many levels as possible: Songwriting, guitar-playing, vocals, lyrics and artwork. I wanted to reach through with my full vision. And I also did the videos. I am not a good director or editor but I am very determined. So I decided to give it a shot. I am actually a bit surprised that the result became as good as it did.

As I’ve mentioned in Necrophobic-interview, you are with Johan Bergebäck practically always going to play together to different hordes and it’s fantastic that you with your old friend created In Aphelion last year. What should we know about the beginnings of this excellent horde? How would you characterize the style of In Aphelion?  I like a lot your voice with guitar-playing as well.

Sebastian: Johan was very supportive from the beginning. I let him listen to my ideas and he gave me feedback. At first I had no intentions of forming a band. This was only about the music. Not trying to be idols of any kind. Bands are really a strange thing. Not only do people want to have the experience of the music but they want to have the presence of the ones writing it to be able to enjoy the music. It’s really very strange. It’s like not being able to enjoy a meal at a restaurant if you don’t get the chef to stand next to the table. I wanted this to be a music only experience. No people behind it that distracts. But as the creation started to grow I changed my mind. And when Johan and Marco came into the picture for real I realized we already were a band no matter what my first intentions where. So I just went along with it. I do call this Black Metal. I think the core of it is Black Metal. But there are a lot of Heavy Metal and Thrash metal influences in this. The voice was something I wanted to try for years. I sing on various Necrophobic albums since 1997. But I never really took the lead. I wanted to try and see if the lyrics would come to life in a new way if I sung it myself instead of someone else. I think my voice is nothing but Black metal. I waved all the other styles in the music together. The guitar playing was a challenge for sure. So much more palm muting than I normally do and faster tempos, different harmonies. And we also tune in E standard which I normally do not do. So there were a lot of new directions to go and a lot of new stuff to try out. I think I got a lot of new tools to use in the future by altering my guitar playing this way. Johan also had to step up. He did the best guitar playing that he has ever done. And it was just perfect together with mine. 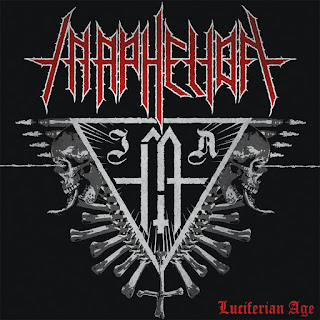 Unfortunately I missed to order from you In Aphelion: Demo I. Is there any chance to re-release it later then? “Let the Beast Run Wild” was your first video, pure raw black metal track mixed with your harmonies. Share some thoughts about this lyric-video please.

Sebastian: The demo will be featured in the extremely limited special bundle pack sold by Edged Circle. It will have the Demo, an exclusive shirt, a poster and both the EP and LP on colored vinyl. Only 25 copies worldwide. So this will be the rarest of the rare. The track Let the Beast Run Wild was the first track that was finished as a demo. I thought it was a really good track to show to the audience. The demo version had that raw power that often gets lost with better productions. I actually kept the demo vocals on the album version. There was no way I was going to catch that early feeling again. Because of that the album version actually sounds a bit rougher than the other songs on the full length Moribund. The lyric video was shot out here in the woods were I take long walks in the weekends. I have more or less turned my back on the city. I never go to pubs anymore. I want to be in the woods. Life is too short to waste it being drunk talking about idiot things in a bar. I want to widen my perspective. Not diminish it.

When do you plan to release In Aphelion LP called “Moribound”?

Sebastian: The album will be out early March. It was supposed to be released before Christmas but as we all know the vinyl plants have no material to work with. The production has stopped because of the shortage of vinyl. So we decided to release the EP first on CD and then wait until the vinyls can be delivered. It is a long wait for me as the songs were all ready by April 2021.

I know your very talented drummer Marco Prij is Dutch but it would be great to see you live then. What is your opinion doing live performances?

Sebastian: I am back and forth with that. Now we have started to play live with Necrophobic again and the schedule is quite full. In a way I would really like to try and see what In Aphelion could be like live. But on the other hand the music is very complex and it will be a next level task to sing and play at the same time. Also as you mentioned Marco is not only Dutch but he is also crazy busy with his band Cryptosis. So we have to wait and see what will come out of this. At least I want to release the full length before we make big plans to launch this band on the roads.

What are your favourite releases this year so far? What do you think about Voodus/Domgård split material Ginnungagap / Ljungeld Över Människan?

Sebastian: Voodus is always great: One of Sweden’s finest band and old friends of mine. Also I think Netherbird made one hell of an album with Arete. I listened to it this morning actually. It is pure magic. And The new Maiden album was also a good one.

In our conversation last year you told us about that infernal cooperation with Jon Andreas Nödtveidt (R.I.C.) on Damnation cover “Insulter of Jesus Christ” and you mentioned your favourite LPs were the first two Dissection-albums from Jon’s heritage. Is there possible in the future that In Aphelion would play an old Dissection cover from “The Somberlain” or “Storm of the Lights Bane”?

Sebastian: No there is no reason to do that. I think it would be impossible to capture the brilliance of those albums. Better leave that be.

In Aphelion name sounds very unique for me. What is the deep meaning of In Aphelion for you?

Sebastian: The world is in “aphelion” when it is furthest from the sun. I see it a bit as I am far from the mothership Necrophobic doing this. It also speaks of solitude and cold. A bit as I feel when I write the music. So to me it is a very fitting name for a Black metal band. Maybe it does not have the punch of “Darkened Nocturn Slaughtercult” but not every band can be named that. Brilliant band by the way. I always try and catch them on the roads.

I’ve seen Necrophobic will play very soon together with Trident in Sweden. Do you have any favourite releases/tracks from Trident?

Sebastian: I really like their last album ‘North’. They were brilliant live. They had Jacob Björnfot from the band Kvaen on vocals and he killed it. Not only is he one of the best guitar-players I have heard but he is also a fantastic front man. We had a great time hanging out with Trident and Avslut on this mini tour.

Swedish Heavy metal project Saints & Sinners  (Erika on vocals, you on guitar, Tobias Cristiansson on bass and Perra Karlsson on drums) recorded “Scream On Anger” a great Europe cover in memory of Marcel Jacob (R.I.P.) in December 2020. Tell us a bit more about this Unholy Alliance. Will you continue Saint & Sinners this year?

Sebastian: Yes we are working on a little something right now … More news soon!

Thank you very much Sebastian! I wish you all the best with your band(s) and your personal life as well!

Sebastian: Thanks for the interview! Support the Underground! Hails!! 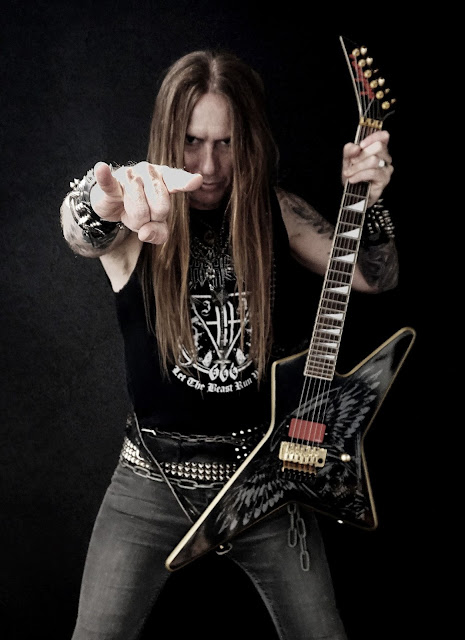