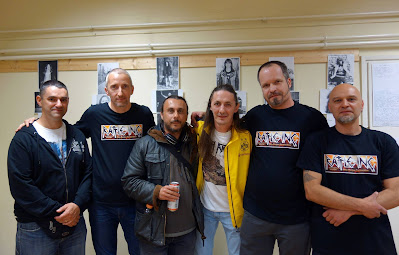 with Tibor Végh (Steel Spider/Flayer 'zine), Coly, Péter Bársony (Mower 'zine),
Tamás Fröchlich (Panic 'zine) and Zoltán "Zozzie" Tóth
Hail my old friend László, you are very welcome to my small own inferno Archangel’s Lantern. When and how did you join the world of the underground metal music?
What was your very first heavy metal stuff you bought?  Which band/bands did you see live for first time and where?
- Hail my old friend Georgius. Well, if I remember correctly, I joined the underground around 1987/88, those times I was 13-14 years old. Before I discovered heavy metal, as a kid of age 8, I was listening to classic 80’s pop music, such as Kajagoogoo, Duran Duran, Wham, Nena, Thompson Twins, Talk Talk, Culture Club, Dead Or Alive etc. I started to turn into the realm of heavy metal simply out of curiosity. I don’t really remember what was my first heavy metal material, what I bought. For the first time I saw Edda in Szombathely (1988) and S.D.I. in Zalaegerszeg (1990). But my best and unforgottable live experience was Slayer’s first gig in Hungary on the 1st of December 1994, at the Olympic Hall in Budapest, the opening act was Machine Head.
How did you characterize Hungarian underground movement in the 80s and early 90s?
- It was simply awesome. We had a lot of talented bands, such as Undertaking, Mirror, Sámán, Classica, Morris, Extreme Deformity, Cultic Pulp, Tormentor, Detonátor, Necrotomy – the list goes on. Unfortunately the majority of the underground bands never managed, were never able to release a full-length record. Only Moby Dick, Monastery Extreme Deformity, Intense Agonizing could put out their releases and then Sear Bliss a little bit later on. It was a big time for the Hungarian underground for sure, with the bands, fanzines. If the then political system wouldn’t have been strong and oppressive, some of our bands could have made a name for themselves worldwide. 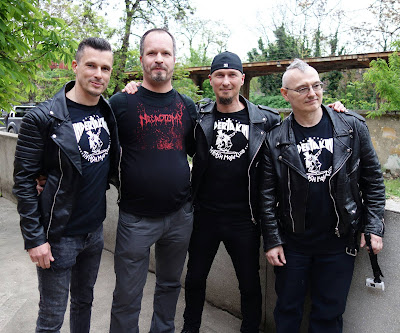 with Undertaking, Imre Esztári, György Jakab and György Killan
Did you play in a metal horde ever? By the way do you play any musical instruments?
- No, I never played in any heavy metal outfit. I learned cello back in the day.
If I’m not mistaken your first article was published in Hungarian Metal Hammer (nowadays HammerWorld) in 1994. Would you be so kind to share your memories about it?
- Yes, it’s true. I met with one of the editors, László Lénárd at a Necropsia/Bedlam show in the Riff Röff Club in Budapest. At that time I studied in the capitol. I simply introduced myself to him and I asked, is there/do I have the opportunity to write about the show. He said yes. I wrote my article, he published and the rest is history….☺
Let’s talk a little bit about your past activity in Hungarian Stygian Shadows fanzine. Which ones were your most successful interviews?
- The Stygian Shadows years were cool. When I got informed about the releasing of the third issue of the ‘zine, I got in touch with the editor László Fodor. Those years we had a lot of fanzines, but in my opinion, his fanzine was the most professional. Furthermore, I discovered fanzines at this point, so around 1997. I corresponded with Laci, we exchanged music with each other etc. Before it I already interviewed him for Ragyogás. I joined him at the 6th issue and remained ‘til the penultimate 15th, because 16th was the last, that he did alone. It was cool to work him with, he was responsible for everything (layout, editing, press etc.), I only wrote articles and did interviews. The most successful interviews? Probably my first Possessed chat with Jeff Becerra (I couldn’t believe my eyes, when he responded me), Undertaking with all of the three members, Tormentor with Attila Szigeti, Morbid and Nihilist with Uffe Cederlund. 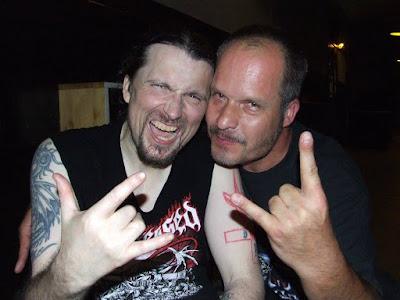 with Jeff Becerra (Possessed)
As far as I know you were one the founder members the first Hungarian webzine namely “Ragyogás” back in the day. What should we know about that?
- Yes, you are right. I was doing Hungary’s very first webzine Ragyogás, with one of my good friends Péter “Sch-dt” Schmidt. At this time I studied in Székesfehérvár and we met each other at a show. I propounded him, that we could do a fanzine together. He told me, we see an Unicum States gig and after that we can discuss about it. Unfortunately the band dissolved….☺. Back in the day, the internet was still in its infancy. Peti had an acquaintance (or friend) Gabriella Kővári (R. I. P.), who was working at an informatics company (I don’t remember its name) and we got some surface. I tell the truth, I wasn’t interested in the background, I never cared of it and understood it, we wrote our materials and one of Peti’s colleagues Mihály “Taki” Takács was putting everything on the net.
László, you have your own metalblog called Leslie’s Metal since 2008. Tell the readers all the important information of your work.
- This is my passion. Although I’m running it very irregularly. If I have some time, I release a review or an interview, but nothing special.
3 years ago you made with my old mate Cornelius of Castrum/Encomium and me a long interview in Hungarian Rattle Inc wherefore we are both so thankful. How did happen the alliance with Tamás ‘Coly’ Tóth and you a few years ago?
- First of all, I did with you the interview, because both of you are very sympathetic for me on the one hand and I wanted to support both of your work on the other hand. Coly is a kind of God for me, he was doing Hungary’s very first printed fanzine Metal Attack (after their 8th issue renamed it Rattle Inc., if I remember well) with his friend Tibor “Benjoe” Bencsik. We were in touch with each other, but we never met. We met for the first time at the releasing party of the Undertaking book. He simply asked me if I wanted to join him. Of course I said yes, such an opportunity could not be missed…☺ 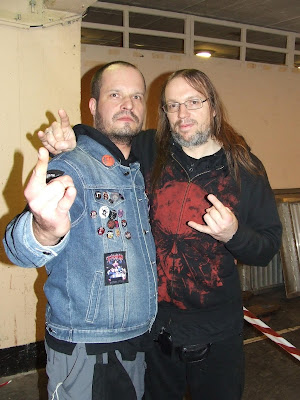 with Ventor (Kreator)
Could you please name 10 of your eternal favourite bands and albums? (big ones’ and small underrated hordes’ releases as well)
- This question I hate the most…☺. So, let we see. 1. Agent Steel – Unstoppable Force, 2. Possessed – Seven Churches, 3. Manowar – Hail to England, 4. Mercyful Fate – Melissa, 5. Destruction – Eternal Devastation, 6. Slayer – Reign in Blood, 7. Death Angel – The Ultra-Violence, 8. Vain – No Respect, 9. Mordred – Fool’s Game, 10. Atheist – Piece of time. But there are many great releases, that I like a lot, such as Heavy Metal Maniac (Exciter), Darkness Descends (Dark Angel), Slowly We Rot (Obituary), I couldn’t list all of them…☺. I think so, one of the most underrated bands are Nasty Savage, they belong to my greatest faves as well, I like all of their releases. Then Artillery’s Terror Squad and By Inheritance, Heathen’s Breaking the Silence, Trouble’s IV and Manic Frustration, Vicious Rumors’ Welcome to the Ball, Watchtower’s Control and Resistance, Devastation’s Idolatry, Confessor’s Condemned, Ripping Corpse’s Dreaming with the Dead, Heretic’s Breaking Point. Too many to mention.
Which pieces are the most precious ones in your own collection?
- My picture vinyls. Destruction – Release from Agony, Possessed/Side Effect – Resurrection 10”, Artillery – Jester 7”, Candlemass – If I Ever Die – 7”, Desaster – Zombie Ritual/Devil’s Sword – shape, Living Death – Vengeance of Hell and Metal Revolution, Anvil – Massacre’s Classix Shape Edition compilation CD.
What are your favourite football players and teams from Hungary and other countries?
- Both music and sport are my favourite hobbies, passions. I like football the most, but I also like ice hockey, waterball. I watch always the Olympic Games (both winter and summer) and football European and World Championship. My fave team in Hungary is Újpest, but in the recent years I don’t have any fave Hungarian players. I prefer and like old players, such as Lajos Détári, Sándor Bácsi, József Kardos for example. Considering other countries, Liverpool, Feyenoord, Atletico Madrid, Fiorentina, Borussia Möchengladbach and 1 FC Kaiserslautern are my faves. For me the best football player of all time is undoubtedly the late Diego Armando Maradona. 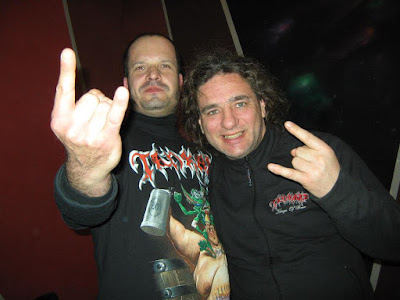 with Gerre (Tankard)
Do you have any favourite writers/poets and books? What kind of movie do you prefer to watch?
- Relatively I often read, but I don’t have any favourite writers/poets. I prefer autobiographic and historic books, I like reading about sport events, the world war two, sometimes detective stories. The same goes the films as well. For example Munich by Steven Spielberg, The Client by Joel Schumacher. And I’m interested in the cold war too.
However, I’ve studied for many years in Hungary but unfortunately I’ve never been in your beautiful hometown Keszthely yet. What interesting places could you recommend to visit from your area? What kind of local foods and drinks are your recommendations?
- Keszthely is mentioned as a capitol of the Lake Balaton. It’s a small town with about 25000 citizens. In the neighborhood/surrounding of Keszthely there are several beautiful places, such as the cave lake in Tapolca, the fortresses/strongholds in Sümeg and Szigliget, Badacsony and the famous thermal lake in Hévíz. There are several specials foods, such as Zalai finom falatok, tócsi, dödölle or sander/pikeperch. Badacsony is very famous for the wines, such as Olaszrizling and Szürkebarát. The traditional Hungarian kitchen/gastronomy is the best and most delicious of course, pancakes Hortobágy style, stuffed cabbage, Csáky rostélyos, beef stew, túrós csusza – to name a few. 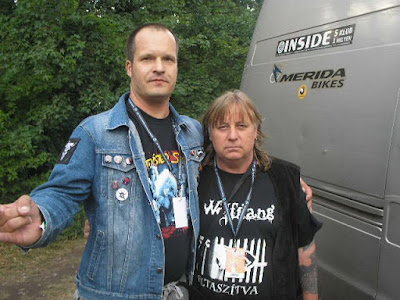 with Tibor Lőrincz (Stress)
Thank you very much my friend László! If there's anything you would like to add at the end of this interview please feel free to do it and send your message for the readers of Archangel’s Lantern.
- I say a big thank to you to give me the opportunity expressing my thoughts. I can’t say any special at the end of this chat. I wish you good health, success and all the best my friend Georgius. I hope, we can meet finally each other in the near future.
Important links:
//rattle.hu/
facebook.com/Rattle-Inc-heavy-metal-magazin-234093637025077 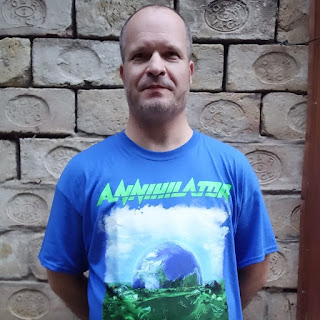