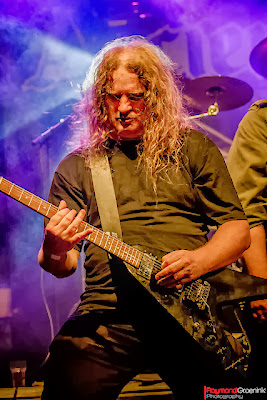 Hail Erik! How did you spend the summer? Did you visit some great concerts or festivals?
- I spend the summer most of the time being busy at my job, but during my three weeks off, I went to Slovenia to a festival called Metaldays. Last year I've been there too when it was still called Metalcamp, and I already got my ticket for Metaldays next year. Unfortunately I didn't go to much festivals this summer, but maybe next year I'll visit a few more. Nevertheless, I always go to a lot of concerts throughout the year, and also this year I've been to some very interesting concerts.

Please, tell us all the important information about hard rock cover-band Plusminus, where you are also playing.
- Plusminus is basically a hard rock cover-band, which performs songs from bands such as AC/DC, Thin Lizzy, Airbourne, Judas Priest, KISS, Rose Tattoo etc. We try to play the songs we perform quite close to the original version, and we also present the songs with an unpolished sound, the way hardrock was meant to be in my opinion. In the end the most important thing is, that we enjoy playing these great hardrock tunes. Our line-up is: Arie Kampman – Vocals, Peter Jung – Lead & Rhythm guitar, Erik Sprooten – Lead & Rhythm guitar, Alex Bakker – Bass guitar, Chiel Lozeman – Drums. The members of Plusminus are experienced musicians with roots in metal music. Besides myself, also Arie left some mark in the metal scene. You can hear him grunt on the album “Embrace Damnation” of the dutch death metal band Houwitser. However, in Plusminus Arie doesn't grunt at all, but actually sings very versatile. Alex used to be bass-player in Inquisitor and can be heard on both demo's. Chiel used to play in a death metal band called Sublustris together with Arie. Peter did play metal for a short while, but he has developed himself as a (hard)rock & blues guitarist. 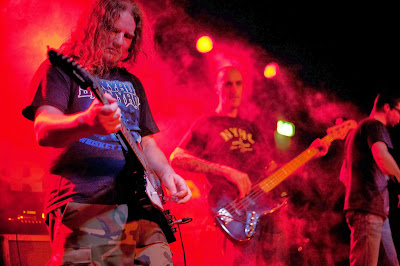 Share please with the readers some details about foundation “Noord Geldersch Metaal”. How popular metal music is in your hometown, Harderwijk?
- Metal music still has a following in my area, but about ten years ago, there used to be a great rock/metal bar for a few years, and during those years, the popularity of metal over here was at its peak. After this bar closed, Noord Geldersch Metaal (NGM) was founded. The main goal of NGM is to promote and support our local metal scene and the metal scene in general. We used to organize gigs in very small clubs in our area. Up until a few years ago, we had to organize our 'bigger' metal gigs in a venue further away from our area but nowadays we mostly organize gigs (in two formats) in Harderwijk in a venue called Estrado. We do all styles of metal (and sometimes rock) and of course a lot of bands from our area and a lot of Dutch metal bands played at our metal events, but also foreign bands like Onslaught, Holy Moses, Freedom Call, Hysterica, Crematory, Sathanas, Nunslaughter etc.

Before Ancient Rites you played in the legendary band Inquisitor, who released an LP in 1996 called "Walpurgis-Sabbath of Lust ". We heard you wanted to re-release it this year, will this happen?
- The plan is, that the re-release of “Walpurgis – Sabbath of Lust” will happen next year via Hammerheart Records. The original release in 1996, was released on CD only. But the re-release will be available on CD and also on vinyl. Both demo's will also be part of the re-release too. And maybe some live footage will be added, but that depends on the quality. I was searching through my pile of underground fanzines with Inquisitor reviews and interviews I did, to see if there's interesting and/or useful stuff which can be used for the re-release. The search certainly brought back great memories.

Who came up with the idea for the name? Were there other names before Inquisitor?
- It was probably our bass-player (and founding member) Alex Bakker who came up with the name I think, 'cause he wrote most of the lyrics and probably stumbled across the word Inquisitor while reading about the Inquisition as inspiration for the lyrics. There was a temporary name before which I can't remember, but we used that temporary name for a few weeks/months until we finally called ourselves Inquisitor. 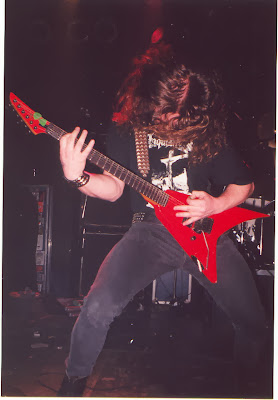 What is your favourite Ancient Rites song and album and why?
- First of all, I like all our, but some of them stand out a bit more. One of our songs which I like very much is Mother Europe, probably 'cause there are some of my best musical ideas in it, but it also is a song where everybody added great musical ideas to it, which makes this song a team effort, and this song has definitely become a favorite among the Ancient Rites Troopers.
My favourite album? That's a difficult question, but I consider the album Rubicon probably as my favourite album mainly because I find the production and mix of that album much more optimal compared to the previous albums.

What do you think about another bands of Gunther, as Iron Clad and Lion's Pride? As far as we know, you played guitar on 3 Iron Clad songs on the album "Lost in a Dream". Tell us more about this cooperation.
- I like those bands but from a musical point of view I prefer Iron Clad more than Lion's Pride. Musically, Iron Clad feels much closer to my musical taste than Lion's Pride. I don't know exactly whose idea it was to ask me for doing some guitar solo’s on the Iron Clad album(s) and also on the “Stand and Defend” album of Lion's Pride, but I know that Gunther and Rony appreciate my way of playing guitar solo’s. In the end it was, logically, Gunther who asked me if I was interested in doing some guitar solo’s on an album for a project he was asked to collaborate, which later became the “Lost in a Dream” album of Iron Clad. The guitar solo’s were more or less recorded on the spot and mainly improvised. I haven't heard a single note of the music of Iron Clad before I entered the studio, so I didn't do any preparation to create some guitar solo’s or parts of them at home. Still the result satisfies me, and I'm glad that I'm able to improvise and create a guitar solo on the spot, if necessary. Even in live situations with Ancient Rites I do some improvisation on some of my guitar solo’s.

What was your first guitar and what model(s) do you use nowadays?
- My very first guitar was actually a right-handed Ibanez Roadster, which I restrung so I could play it left-handed. (For those who don't know or never did notice, I'm a left-handed guitarist). Basically this Ibanez guitar was some kind of a Fender Stratocaster copy with single coil pick-ups, but without a pick-guard. I don't have this guitar in my possession anymore, which I don't regret. My first left-handed guitar is my Ferrari Red LAG VRL, which is a Rhandy Rhoads Flying-V. Although this isn't a custom-made guitar, it still was made for me after I commissioned LAG (via a shop) to built their Randy Rhoads Flying-V model in a left-handed configuration. It took a few months to built but it was absolutely worth the wait. I still have this guitar to this day and I performed all gigs from Inquisitor with this guitar and (almost) every gig of Ancient Rites till just before the live-recordings of “And The Hordes Stood As One”. I still use this guitar from time to time, and this guitar is the one I consider as my real first guitar. My main guitars at the moment are Gibson Flying-V, Gibson Explorer and The Heritage H150 Black which is a Les Paul model.

I actually like a lot of guitarists, but the ones mentioned are the ones I admire most at this moment as individual players.

Are you into in classical music? If yes, which compositors do you prefer?
- I do like to listen to classical music but only from time to time. I can't really say that I prefer certain composers at this moment but I'm familiar with some music of Beethoven, Vivaldi, Schubert, Strauss, JS Bach and  some others. There is definitely some great classical music recorded, which I should hear. I will definitely go to a classical concert in the near future. The closest thing to a classical concert I've been to was (The Original) Rock meets Classic earlier this year.

The Netherlands and Belgium are both well-known about famous painters. Have you any favorite painters and paintings? Would you be so kind recommend us some museums?
- We are definitely known for painters like Rembrandt, Rubens (Be), Vermeer but also Van Gogh. A well-known museum in The Netherlands is the Rijksmuseum in Amsterdam where a few paintings of Rembrandt, Rubens and Vermeer can be admired. And if you want to see some paintings of Van  Gogh, you should go to the Kröller Müller Museum, which is not that far from where I live. I've been there once and there is quite a lot of modern art to be seen too. Some modern art I can appreciate but quite a lot of modern art I find extremely tasteless and a waste of money and materials. I appreciate our famous painters from the past most, but can't say that I prefer one.

Dank je wel, Erik! The last words from Ancient hordes are yours!
- Hail Georgius, thanks for this interview! World Wake Up! Keep supporting metal!