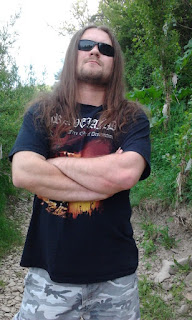 Hail Rawar! Hellcome in Archangel’s Lantern! Enlight please  firstly the readers about latest news of Contaminated!
- Hail! I’m so glad to share with the readers a very important information: Contaminated ”Your ashes are nothing” has released on Russian label „More hate productions” on 17th of May this year! After the released our first full-length I have given few interviews for the web-zines and fanzines as well. Promotion stuff is on its way....

What is the situation nowadays with Contaminated? Any new tracks, maybe live shows?
- First of all I would to note that Contaminated  is just a studio project right now but I don’t know what will bring the future.....Maybe we will do some live shows someday. At the moment I have a big problem because Nefarious (guitars) had loss his interests to Contaminated after the release of our full-length..and I still don’t know real cause of that...but I will continue my path with him or with another musicians... 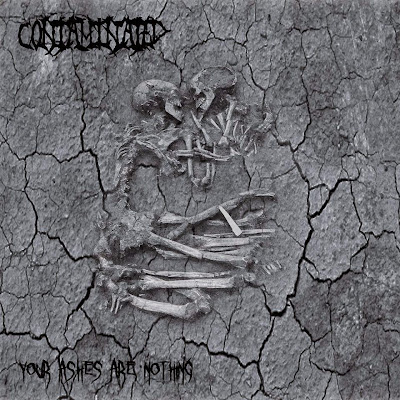 How do you imagine the future of Contaminated?
- Well, I have my  own  visions of development Contaminated’s future style.. it will be more technical death metal style in veins of Martyr (Canada), Beyond Creation, Cryptopsy, Soreption et cetera....but this don’t mean  that I would to copy these bands!

What about Your lyrical conception for the new stuff?
- I’ve written 2 new lyrics for the possible EP, called „Transition”, it’s about of Cosmos, Philosophy of human self-destruction and inner dissonance.

How You should imagine your future EP?
- It might be include 2 new tracks and 2 covers (Anthrax "Room for one more” and Pestilence "Mind Reflections”)

With your past band Terrorium at live You played  a few parts of my  first band, Castrum-cover, called Painful Sighs in Castrum and it is a big honor for me. Tell to the readers about it and Your live performances of Total cover Party!
- It has been so funny thing :)  It’s happened in one of our live shows in Uzhgorod, 2006. It was a fucken joke because we had a plan to make our audience to smile and You, „mighty” Georgius was captured in the trap because our so called-cover had just a few seconds :) well, about Total cover parties: in my opinion it is a great event. I have been on first show  on Sepultura -"Troops of Doom" (as a vocalist) and Obituary: Redneck Stomp (as a bass-player). Last but not least on 3-rd show I enjoyed with my past band Reusmarkt with my clean vocals on Marduk-"Accuser/Opposer", Lake of Tears-"Ravenland" and growling on Obituary-Chopped in Half. It was so great! 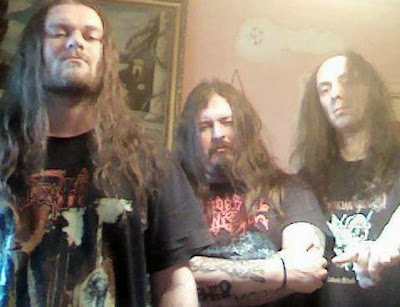 Well, share Your thoughts about our common land, Transcarpathia and our common hometown, Uzhhorod!
- I would to say firstly I’m so glad that I was born this beautiful and  charming ancient town. Our region  belongs on the edge of Ukrainian borders of Europe! In our homeland we are living in peace and we  respect   each other in general, as culture, traditions and tranquility.

What’s kind of literature did You read last time?

What are your favourite movies?
- I like so much to watch a lot of different stuff, which contains philosophical and dramatic things :)  I’m tired to watch a popular bullshit  :)

As You know, Archangel's Lantern is Eternally dedicated to Jon Nödtveidt. When did you listen to first time Dissection? Which tracks do you like most about Dissection?   Would you be so kind to tell us your opinion about Jon's Heritage?
- The first album of Dissection what I’ve listened to, has been Storm Of The Light's Bane in 2000 and I was shocked by the symbiosis of aggressive and melodic mixture. My favourite tracks are "Unhallowed", "Where Dead Angels Lie", "Night’s Blood", "The Somberlain", "Xeper I Set". I'll always respect his heritage because that person  ’til stays in my eyes as a Real Warrior of his own Path what he has chosen..I think, the man must to search own path by his Art of Creation. The fools  just judge but only the true Ones choose...... I wouldn’t to say any standards about Him just tell, His Art of Dissection never will be forgotten.... Hail  Jon!

Дякую/Thank you very much Rawar! Your Contaminated words to the readers....
- I would wish for the clever ones to stay  just be themselves and fools and posers to clean their minds!
Stay strong and listen to Real music(k)! Hail! 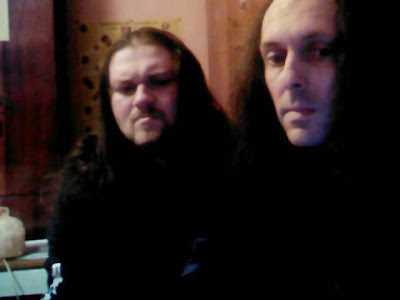 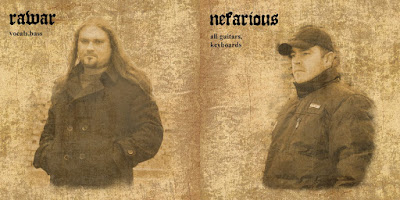 Hailz, Contaminated! Because this is the first interview with you, and there is also lack of information about you on the internet, please tell us your biography!
- Hail Sorin, here is Rawar of Contaminated, firstly a big thanks for your support!
The band has been created in 2007, when 2 friends, Rawar and Nefarious decided to create a death metal band of old-school style. The band recorded their stuff: demo-album "Towards Murderous Compulsion" in 2007 (that demo-album, which one includes 17 tracks in veins of "British death metal school", as  Benediction, Napalm Death ('90's era)). Next demo-album, "Subliminal Absurdity" was released in 2010.
Contaminated band recorded their most professional and technical album, "Your Ashes are Nothing" in March, 2013. That album includes a mixture of American and Dutch death metal traditions of old school.....

Did the members play in other bands?
- I came into metal music in 1996 and as musician, we, with Nepharious created a death/black metal horde called Anubis in Uzhgorod, in 2001. Anubis band existed until 2005, we played some gigs in our hometown, Uzhgorod, and recorded a demo-album entitled „Heretical Perception” and we had good reception there. After that I did a few shows with a local thrash-band, Terrorium, between 2005-2007, as a drummer. Then I enjoyed (as drummer) in the resurrection of a great Ukranian heathen black metal band, Reusmarkt, with Vladimir(guitars) of Anubis. With Reusmarkt I played a lot of live performances(for example Kolovrat-Fest and crushed some places through Ukraine) and I left that band for personal reasons, one of that it was my loyalty to play old-school death metal.

Well, you are a good death metal band. And the only new good band I know from Uzhgorod. Can you describe the local scene? What about the reactions so far?
- Thanks a lot! As for me I never called  that we had/have a local scene here in Uzhgorod, the reason is simple: we have a lot of bands with excellent shit, „metalcore, punk, deathcore, pseudo-black metal”, that is not my cup of tea. We have a few old bands like Castrum and Soulrest. We never played live but between old-schoolers of our hometown we had and have a good reception.

Now, let's talk about your debut LP. Give us some info about it!
- The recording process of drums, guitars and bass we did it at „homework-studio”. I hate recording process, I’ve felt sick. Vocals were recorded in Municipal Radio”-studio. That's all.

Did you signed with a label or it will be self-released?
- It has been a self-released one and we’ve sent/will send to a lot of labels through Worldwide.

Did you played any live-shows so far?
- Still not, but if we will catch a good label, I will search some musicians for the live shows.

Do you plan to make a tour to promote your album?
- Let’s see. Hopefully, yes!

Please enlight us about your lyrical conception!
- That is a good, deep question. In my opinion as music as lyrical conception are whole one! But this does not means black metal position, where lyrics are supreme.
I see that mankind comes to logical end! Because processes of Universe always have the beginning and the end. Then no need to have a surprise, what happening nowadays, it’s a cycle process of time. Humanity are marching to a logical, forthcoming end and going to a new era, but I think the mankind didn’t make some conclusions. Read our lyrics and I hope You’ll understand my opinion about all.

What bands from Russia, Ukraine, Hungary, Romania and Moldova can you recommend us? And also from the entire globe(if you can add some)?
- Ok, step by step:
From Russia: Septory, Morrah, Grace Disgraced, Khasm, Sect, Djur….
Ukraine: Sidus Mortuorum, Slaughter Brute, early-Fleshgore, Ulvegr, Violent Omen
From Romania I would like to mention Avatar, and from Moldova Lethal Outcome and Disentomb…
Hungary: Gutted and I know personally a freak funny man, called Georgius, who used to be as vocalist in Hungarian black metal horde, Domhring and early Castrum also.

( this is random one because I listen to and like much more..:) )

Can you recommend us some foods and drinks from your area?
- It’s funny, I know, but I prefer Italian kitchen :)
Ok but from local ones I like so much  traditional Ukranian and Hungarian ones. Some foods for example: borshch, vareniki, rakott krumpli, gulyás. I like good vodka and Bourbon-whisky. And I like also a good Czech or German beer.

That's all for now. The last words are yours!
- Mersi, Sorin, for your support again! Open your eyes and ears to Contaminated because we are working with our official site in facebook. You do a great job with supporting of true underground, wish you all the best, Transcarpathian regards!

Contaminated can be dismembered here: