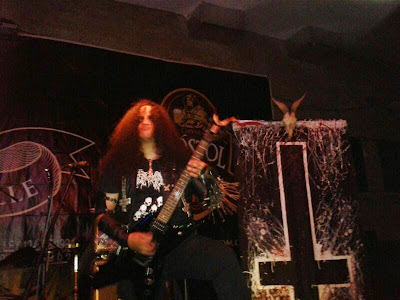 Hail Brother Zarthan! When did you become as a maniac of metal music? What was your first band?
Hail Brother Georgius, first at all, thanks for your friendship and support to my band and also to the underground.
- Since I was a little kid I used to listen to some Glam and Rock N’Roll bands like Black Sabbath, KISS, AC/DC, Alice Cooper, Led Zeppelin, Skid Row, Motley Crue, etc. Then, when I was like 11 o 12 years old I started to listen to bands like Venom, Possessed, Impaled Nazarene, Sepultura, Parabellum…. And Fuck! Since that, my life has changed totally.
For a long time in my life I tried to create a band, but unfortunately, the people I knew preferred to get drunk or high and I lost a lot of time on it. In 2002 I began a Death Metal band named MARDRAUM with my warbrother Nekromanzer. I was Vocal/Lead Guitar, we only released a demo and the band decided to spilt up in 2008. Now we are going to play again. In 2009 I began to play with KING and also this year I’m a lead vocal in a new band Called PESTUM.

How did you enjoy Colombian death/black horde, KING? You recorded your first full-length in 2012 called ”Forged by Satan’s Doctrine”. How was its reception in the underground metal press?
- KING is a big part of my life, I feel really proud to play on it. Our album had a great reception and very good comments from a lot or people, zines, webzines, TV shows, radio shows, even we stay between the 10 most listened songs in a radio show from USA in 2012. A lot of people ask us about the next album release, some bands have contacted us for record splits and also some labels have contacted us to release our next album.

Would you be so kind to tell to the readers about latest news of KING?
- We are working on composing new songs for our next album that will be named “Blood, Fire & Black Magic” and we are going to studio as soon as possible. We are also talking to Bizarre Death Distro (Colombia) to release a Split in vinyl.

Share with us about live activity of your band!
- We have faced a lot of problems with our drummers and we have spent too much time without  live performances, we had been forced to cancel several concerts in Colombia, South America, tours and in fact a tour in Europe. We like our live performances, they are very really brutal (comments from the audience and media), we think that music and visual must be brutal and be unholy so we made stuff in order to recreate a profane stage.
Now we have a drummer, He plays in a Black/Thrash Metal band called Murmur, we are working in our new album with him and some old songs. As soon as we have completed a set list, we are going to work in order to make live shows again. 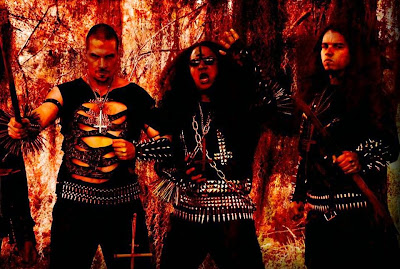 As far as I know, you made a lot of artworks, layouts and designs to bands as legendary Colombian Masacre, Detriktuss, Slander, Seeds of Iblis, Lust, Mortiferian and last but not least King. Enlight us please about these details!
- I’m a Graphic Designer, the most of my work is commercial stuff for companies, business, individuals, etc…  I really like my job and I love to create and design.
With the exception of Lust, the rest of the bands are very close friends of mine, included Lust’s record label “Non-Serviam Records”. I’m passionate enough to help in the design of their albums, also I frequently create flyers, stickers, Banners, logos, posters, etc to local bands, producers and labels.

If I’m not mistaken, You are working in EVIL DEAD Productions in Medellin. What we should to know about it?
- Me and my very close friends, decided to make shows with local and international bands, we are tired about some producer and festivals that promise a lot of stuffs to the bands but at the end they only give a lot of shit and empty promises and also when an international band plays, the promoters tend to ask the opening band to pay a lot of money to play (What the Fuck is that shit, I’m no going to pay money to play). I and my brothers are really sick about it, so we decided to create Evil Dead Production.  We have made some festivals with local and international bands and now we are working in our next show with “Terrorizer” and a local legend “Averno” that haven´t play for 18 years.  We are a small label right now but we have plans to be a big label with the pass of the time. 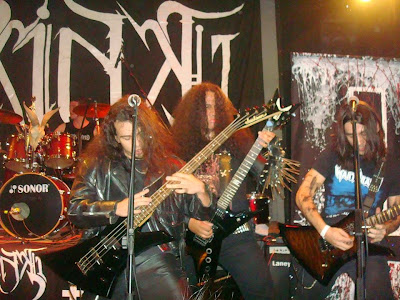 As you see, my small web-blog is dedicated to Jon Andreas Nödtveidt... What's your opinion about Him? Did He inspired you ever?
- Jon is a Metal Music Icon, his music, his ideals, everything. He is one of the biggest influences in the Metal scene around the world. I knew Dissection when I was really young and I have never stopped listening to his music, and Jon is a great influence for me and my band mates.

Do you have any hobbies besides music?
- I am a passionate about Design, I like so much Movies like terror, horror, gore movies and those in which the world and mankind collapse. Also I love to travel, have sex, go to the Gym, exercise and practice Krav Maga (I have to stop due to a problem in my back) , read especially occult and paranormal themes and drink alcohol.

What recommendations do you have from Colombian cuisine? Can you recommend us some kind of drinks, cofee and tobaccoes from Colombia?
- I only recommend you Coffee, Cocaine and Vaginas; the local alcohol is very bad, tastes like dog piss compared with European or North American drinks. However, Colombia has great and amazing landscapes, Mountains, Woods, Beaches, a variety of hot and easy to get women.

Muchas gracias, Zarthan! Your message to the readers of Archangel’s Lantern....
- Thank you again Georgius for your support and friendship, and for the readers… keep the black flame alive and support the underground, stop download music and buy it!!!
HAIL SATAN!!!! 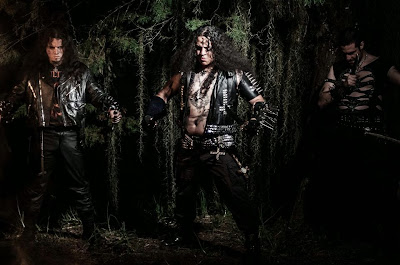