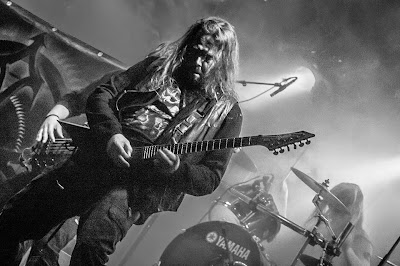 Georgius: Hail Henne! First of all I would to congratulate You on Your 25th Anniversary of Obscenity. Tell us please about the beginnings briefly! When did You become a metalhead?
- Hi Georg, first of all thanx for the wishes and the interview.
It was in 1983 when I was in the age of 13 , I had the first contact with my all-time favourite band Kiss! Got a few LP´s of them and afterwards I was interested in WASP and Mötley Crüe.. A couple of years later I heard of Accept and Helloween, Slayer and stuff like that. Slayer was totally new for a boy like me. This music was hard to understand for me at first.. but the more I heard that stuff, the more I liked it. Venom, Exodus and Destruction followed and a few years later the first Death Metal Bands came over to Germany. One of the first I heard were Monstrosity and Morbid Angel...
I have to admit that Monstrosity are one of my biggest influences in playing metal music...

Barbara (Northern Ireland): Which band or bands influenced You in the early years and why?
- I had several bands before we started with Obscenity. But as we started we were musically  influenced by Sepultura, Morbid Angel, Monstrosity and Deicide. In the late 80's we don´t have much bands in this genre and we didn´t have much information outside Germany and Europe. We had magazines and Radiobroadcast to inform who these bands are and where they come from. There was no Youtube and no Facebook. Internet was not existing!
This was one the main reason the metal scene was developed very slow but intense.

Sorin (Romania): For the debut LP you signed with West Virginia Records, and you release only one album with them. How did you signed with them and why the "relationship" lasted for one album only?
- Right, it was our first deal in 91. We sent our demo “ Age of Brutality” to all Metal Labels in Europe. Soon we had an offer from WVR Recs. We met them and signed the contract for one long-player. Had a cool time with them, and like to remember the recording time when we met Andy and Sabina Classen, Venom´s Cronos and all the other guys who were on the label..
After a few Years later the label split up .. but don´t ask me about the reason. We had no information.Maybe a bankrupt or a split, I have no clue...

Sorin: Well, your debut "Suffocated Truth" is my favourite Obscenity release. But, for some reason it is very hard to buy it and a 2nd copy is very expensive. Do you plan to re-release it someday?
- Yes, Suffo and Perversion will be re-released by a Dutch Label called Vic Records. The release date is unknown but I guess it will be late 2014.

Georgius: After the release of the 2012 album, ”Atrophied in Anguish” (Apostasy Records), (where Jeff Rudes did a hellish good job, as vocalist) Jeff has been replaced by the new one, Tobias Mueller. Share us about it some information: where did You meet him and did he play in any band(s) before?
- Jeff did well, in fact. But his private situation did not allow him to go on with making music. Our bass player Joerg came up with Tobias. They are friends for more than a decade now. We already knew some of his former work with other bands and invited him to join us for a rehearsal session. Well, what could I say… a couple weeks later we played the ExtremeFest altogether and we´re pretty sure he´ll kick your asses on the new album as he did at the shows since he joined us.

Georgius: Would You be so kind to tell us about Your latest live shows? Maybe You will come to play to Hungary in the near future?
- Our last shows took place in Hamburg, Leipzig, our home town Oldenburg, there also was an open air session in Bavaria and the underground remains open air in Goettingen. All went pretty well and we´ve had a lot of fun playing these gigs. For Hungary, that would be totally awesome! I hope someone reading this gets in touch with us and we´ll get the opportunity to play for you guys sooner than later! 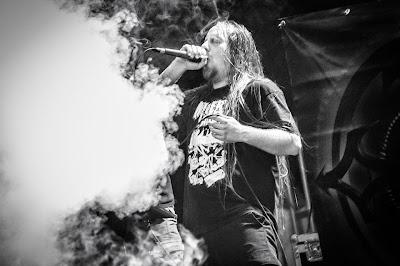 Joanna (Germany): You made a great video in 2012, called „From Heroic to Depraved” with Matt Knust, do you have any plans to do another one with him?
- Yes, definitely! It´s still too early to say what we´re going to do or even which song we´ll be using. But there´s a video to come to support the album as soon as it´s done, we promise. And Matt is our very first choice to help us realizing it.

Joanna: Is there any plan to release an Obscenity-DVD or something special one for the 25th Anniversary?
- That would have been great, but we´re too busy with working on the new material and playing shows. So, unfortunately there won´t be a DVD or something like that in the near future. We hope the next record will compensate this lack.

Georgius: What is the situation with the new Obscenity tracks? It would be great to listen to some new ones of Obscenity soon.
- We´re doing good at writing new songs and a good deal of work has already been done. There´s no exact recording date yet, but it´ll be around the end of the year probably as we´ll also play some shows in the mean time. So don´t worry, we´ll be up with new stuff pretty soon.

Innominandus (Ukraine): it is a bit hard question, I know but what are your favourite Obscenity-tracks and why?
- The songs I wrote. They contains all ,a good song needs ..hahaha. No, there are a lot of songs I like. For example “The Arrival”, "Alien Hand Syndrome", "Die Again", "Infestical Plague"... I can name a few more. It is hard to answere, you know. I like these kinda songs who were fast and static with a good melodic solo.

Innominandus: The German metal scene is an excellent one since 80’s.... Would You be so kind recommend us some newcomer bands from Germany, maybe from your area?
- Hmm, there are no well known Bands around here. Only a few demo bands ..I really don´t know their names, I am sorry.  But I can recommend “BlackShore”, a Black Metal band with much different  influences. Good guys we often played with. Check them out! 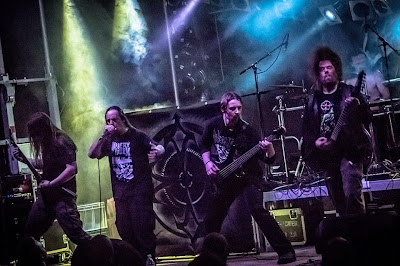 Georgius: What bands from Hungary and Ukraine do You know? Have you ever been in Hungary?
- Ektomorf and Tormentor are from Hungary, I guess. And if I´m right, there´s Fleshgore from Ukraine.
Tobias has been to Hungary for a holiday trip, he once told us, but I really don´t know if he watched some metal shows back then.

Barbara (Northern Ireland) : What is your favorite place to holiday and how do you do stress?
- I have been travelling to France / Metz, the last 2 years. And we had a gig many years ago in a small cellar club. I love this old city and the river Moselle. When the weather is good , go and drink some red wine and watch out for the sunset. It is really relaxing !

Georgius: Vielen dank, Henne! Wish You all the Be(a)st with Obscenity and please, put your message to the readers of Archangel’s Lantern.......
- Ok, George. Thanx for having us in your mag. Stay tuned and watch out for the next album. The songs are already written and arranged. The cover is in progress. But I did not reveal the album title,haha. Make ready for some changes, guys. It will be a Death- feast ….Stay obscene !

a conversation with Henne in Encomium, 2012:
http://www.castrum.com.ua/encomium/obscenity.htm