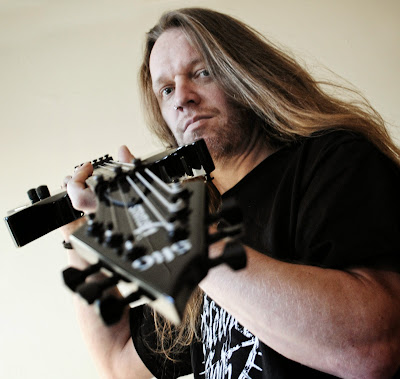 Hail Erwin, I hope You are doing well! Tell us firstly, how did you get introduced into metal?  What was your first band?
- Hey, with me everything is cool. I got introduced in metal when I was around 9 or 10 years old with Kiss and Iron Maiden and later Metallica and Slayer. The first real band I played in was with a bunch of friends called Pesticide, I was the bass-player and vocalist and we did a couple of gigs and recorded a live tape. I think I was around 15 or 16 years old.

You recorded 3 awesome death metal masterpieces, 3 full-length albums with Supreme Pain. What is the situation with Supreme Pain nowadays? Do you have some new tracks or any plans for the future?
- Well, actually I recorded 4 CD's, I also recorded guitars for Fondlecorpse Creaturegore album. Thanx for the kind words about Supreme Pain. At the moment Supreme Pain is on hold because of several reasons. Eric de Windt is busy with Warfather at the moment and Aad is more focused on Sinister. But i am working on some new tracks which will be for a new project in the future. It will be for sure extreme blasting death metal with some epic parts in it. How long it will take before it see the light of day I don't know because I am still writing and I take my time for it to make it as good as possible.

You’ve enjoyed Dutch death/thrash/heavy horde, Bleeding Gods in 2012. Would you be so kind to share with us some infos about this alliance?
- Well, I heard that Ramon Ploeg (guitarist) was busy with creating a new band and I asked him if he needed a second guitarist and he said yes, so I joined Bleeding Gods. Very simple haha. At that time things with Supreme Pain were already a bit on hold so I had enough time haha.

Bleeding Gods recorded an awesome promo-stuff, called ”Blood symphony” (4 tracks) early April, 2013. What we should know about this material?
- Well, we recorded all tracks in a weekend together with Willem who is also our live sound engineer. And the result is pretty ok. The four songs will also be on the first full length but then with a couple changes just because we changed some arrangements and some drum parts. 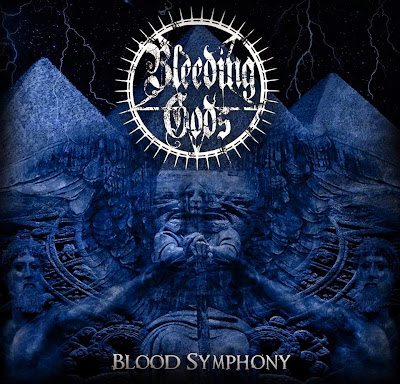 Bleeding Gods got signed by the Italian record label, Punishment 18 Records, had changes in line-up and will go to record first full-length album this year. Enlight the readers please these details!
- We sent the promo to a couple of labels and Punishment 18 was interested to release a full length and we got a good agreement.
We will enter The Soundlodge Studio from Jörg Uken in Germany in September to record the album. I know Jörg from the recordings of the last 2 Supreme Pain albums and it is great to work with him, he is a great producer who will create a great sound. And then somewhere in November the album will be released.
Yeah, we had some line-up changes. First Bart was replaced by Gea Mulder just because he didn't had enough time for Bleeding Gods. And the last change was with vocalist Arnold who is recently replaced by Mark Huisman. We had already some time problems with the attitude of Arnold and his lack of interest in the band, he didn't show up at rehearsals and also could not remember the lyrics and parts and so on, so we decided to kick him out and search for a new vocalist. We didn't want to take a risk with him just before the recordings.
We had several options and Mark was just the best. He is a cool guy and very enthusiastic and also a great singer with a lot of ideas about vocal parts and lyric concepts. We all think he fits great in Bleeding Gods and the rehearsals we have with him tuned out great.

Bleeding Gods did some amazing live performances since 2012. Do you have some tours in plan for the near future after the recording of first full-length?
- Yeah we have already some gigs confirmed in the near future after the recordings and there are some plans for some short tours but nothing about the tours is confirmed yet. So I cannot tell you anything about it, but i hope things will turn out good to play some shows in Europe.

What was your first guitar and what model do you use nowadays?
- My first guitar was a Hohner flying V i bought when i was around 14 years old, i still have it. I also play on a ESP/LTD V. And at the moment i have an endorsement with SKG guitars (the guitars made by Henri Sattler from God Dethroned) he made a custom build SKG Stratus 6 model. And I am using this guitar for Bleeding Gods. 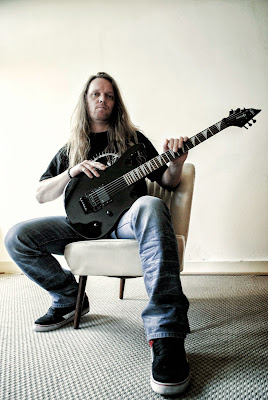 Your top 5 all-time favourite guitarists?
- Wow that is not easy because there are some many great guitarists but ok I will give you 5 guitarists I like a lot and who give me ideas.
- Chuck Schuldiner
- Terrence Hobbs/Guy Marchais because they are Suffocation!!
- Jeff Loomis
- Keith Merrow
- Joe Haley
Well, sorry I mentioned 6 just because Suffocation have 2 awesome guitarists hehe.

My Dutch friend, Serge is doing a hellish good job for promoting the Dutch brutal death/thrash/black metal scene with his page on a social network and if I’m not mistaken, your girlfriend, Mirjana is a member there also. Please, share Your thoughts about their activity!
- Well it just great that Serge started this Dutch brutal network to support the Dutch metal scene, not only the well known bands but every band from The Netherlands so that is very cool. Yeah Mirjana, my girlfriend is also part of this network together with Serge and some other people to post news about Dutch metal bands and musicians.

Do you have any hobbies apart music?
- Besides music my other hobby is Viking re-enactment and special the fighting part with weapons like swords, spears axes etc. You can compare it with the fencing sport it has some similar rules but also completely different.  I do this for more then 20 years and it just great, i have a lot of friends from all over the world.
So it is also similar to the metal music because I also have friends all over the world.

Dank je wel, Erwin! Your message to the readers of Archangel’s Lantern?
- Jij ook bedankt Georgius!! Thanx for the support, very cool !!!
Well keep supporting the metal scene and I hope you all like Bleeding Gods debut full length and maybe we meet at some shows.