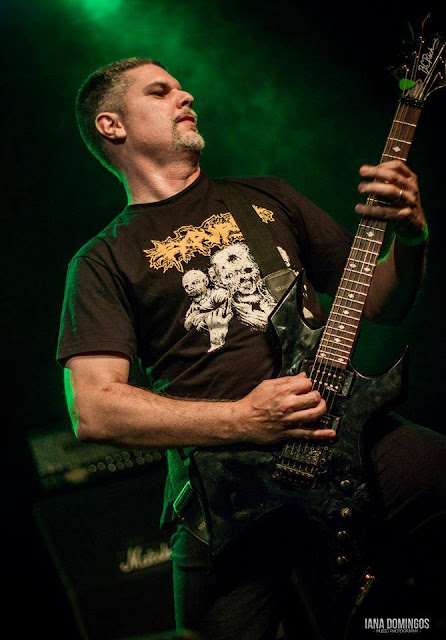 Hail Sérgio! Let's start with some background information about PRECEPTOR. Whose idea was to focus musically on the old-school type of Death Metal there? Tell us a bit about the band members' past and actual bands as well. How the underground scene of Belo Horizonte looks like actually?
- First of all, I would like to thank immensely the opportunity to talk a bit about our band for you guys, Georgius and Cornelius. We never imagined that our songs one day would reach places like Romania, Ukraine or Slovakia!
Preceptor is a band of old friends that used to exchange K7 recording back in the early 90’s, when we formed ours first bands. Me and Grilão (guitars) played together in a band called Mortthrash, Du and Morone (vocals and drums, respectively) played in another band called Vector Underfate and Fred (bass) has a band called Throll and also passed through other bands from Belo Horizonte. Nowadays I also play in a Grindcore band, Expurgo, Du also plays grind in Mata Borrão and Morone has another Death Metal band called Chronic Ashes.
Belo Horizonte’s underground scene has grown a lot, and not only Belo Horizonte’s, but the Brazilian scene as a whole. Lots of new bands coming up, older groups coming back to play together, new studios and venues to play too. Obviously we don’t have a lot of support and there's a lot of “DIY” but in the underground it’s always going to be like that. 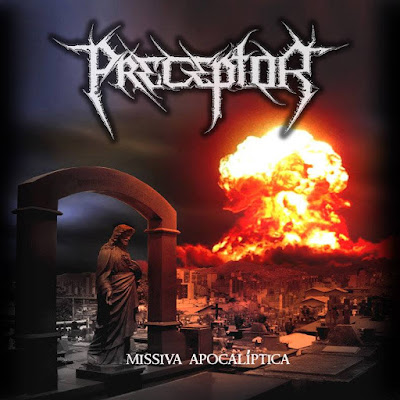 PRECEPTOR's debut album, called "Dogmatismo" was released 20th of July, this year. I've listened to it at bandcamp and have to admit you did an excellent job! Enlighten us the circumstances during the recordings of your debut full-length and also say something about your previous materials too (demo, EP and single).
- Thanks for the words; I'm glad you liked the album. We're almost a fifteen years old band and with really few materials released. That's a reflection of the difficulty towards making music in our country. Our time is shared with family (me with 2 sons) and especially our regular jobs that take a lot of time and energy. We began recording Dogmatismo in 2016 and only now in 2017 we have been able to release the record in partnership with 4 labels - Songs for Satan, Misanthropic Records, Jazigo Distro and Philosofic Arts. The disc features songs gathered within a 10-year period, which in a way contributed to the record with varied songs keeping the band's identity. 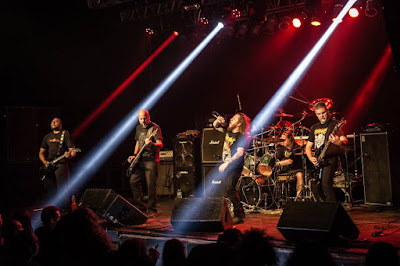 The title and the cover art of "Dogmatismo" clearly display your kind of resistance against religion and church. Does the brainwashing propaganda remain the same these days as well? What is the main idea behind the lyrics of "Dogmatismo"?
- Exactly. Here in Brazil we have a growing religious force invading even our politics and that's an aspect we combat in our lyrics. Dogmatismo's lyrics question everything that's imposed to us always. Hypocrisy, dogmas that drag the human thought, brainwash and rotten religious fanaticism are our principal themes. 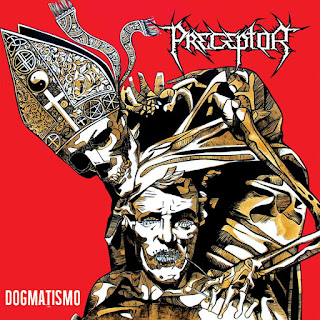 Your debut album was released by Brazilian Songs for Satan? What kind of deal do you have with them? What should we know about your connection with Misanthropic Records?

- As I mentioned before, the disc was released as a partnership between 4 labels. We don't have any kind of contract with any of them, but Flavio Oliveira, from Songs for Satan, was our main encourager for the disc's recording. We handled all the recording, mixing and graphic art, meanwhile the labels' dealers with the manufacturing and release of 500 copies of the disc. 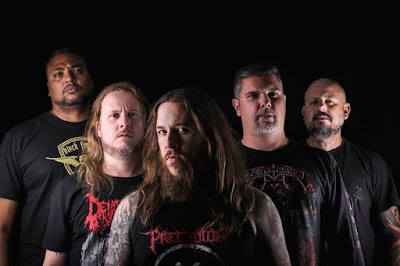 You told me that during the summer you shred the stages with DEICIDE. How did it happen and what should we know about that massive yet hellish alliance? What are your plans for the near future regarding concerts? It would be really great to see you live in Europe, especially somewhere in Slovakia or Hungary.
- During all those fourteen years of existence we have been rehearsing and playing live a lot. In a way we could say that we have gotten a lot better. The show with Deicide was the first big opportunity we had right after we released Dogmatismo and it was an amazing show. Without a doubt the best show we ever did. Crowded house, good sound technicians and lighting and we were very well rehearsed. We had a very positive feedback from the public. We sold dozens of shirts and CDs after the show. We felt in 1995 seeing Deicide on stage playing songs like Sacrificial Suicide or Once Upon the Cross right after our show. It was really unbelievable. 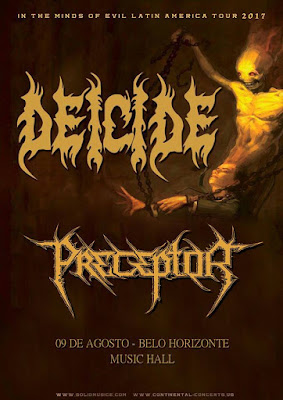 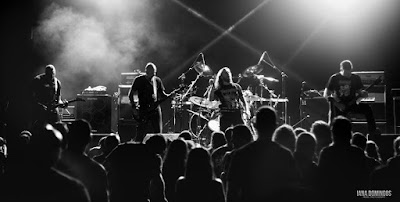 Could you tell us about your beautiful Brazilian land in short (especially Belo Horizonte)? What local places would you recommend with pleasure to visit the readers once they travel there? Please introduce us the Brazilian culinary art. Which foods and drinks would be your recommendations from Belo Horizonte?
- Belo Horizonte isn't only the city of bands like Sepultura, Sarcófago, Overdose, Mutilator, Holocausto and Chakal amongst other bands from the 80's. Other than being a nest for many extreme metal bands, we have a lot of interesting attractions. Our state is a land of mountains, we don't have beaches, but we have plenty of natural beauty, like exuberant flora, waterfalls, caves, etc. The food from Minas Gerais (our state's name) is amazing and it can be discovered in the big Mercado Central and in the diverse restaurants around the city. Belo Horizonte is the city with most of the bars in Brazil, which attracts people from the entire country. And here, in our state, is produced the best “cachaça” of our country, drink which we use to make the “caipirinha”, a mix of cachaça, lemon, ice and sugar. 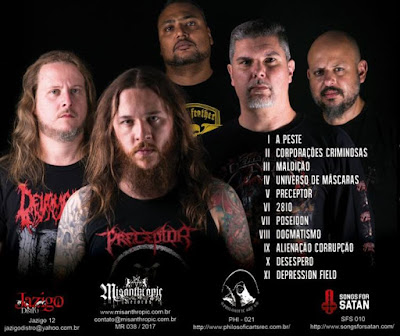 I assume all of you have daily jobs, right? It is hard to live there and to spread the Death Metal way of life to the masses? Do you have any other hobbies beside music?
- That's one of the big problems that deny us the time to compose, travel to play and dedicate more to the band. It's practically impossible to live from a Death Metal band in Brazil. We spend much more than we earn with the band. The only thing that keeps us in the music is the passion for extreme metal and the pleasure that we always had playing Death Metal. It's very hard to balance all things in life, keep the band active and still have a hobby. I like to take walks or ride a bike in the wild, searching for waterfalls and I also an old-school frustrated street skater, hahaha! 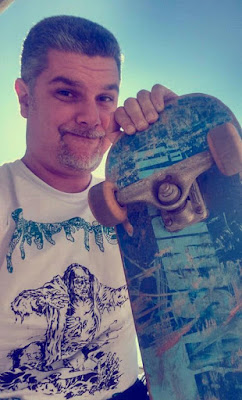 I'm a big supporter of Seleção since 1982 (Zico, Eder, Socrates, Junior, Falcao, Edinho, etc. era). Do you like football and if so, what are your favorite players from the old times and our days?
- Dude, the national team of Zico, Sócrates, Junior and Falcão were the ones that gave my generation the most happiness, despite not winning that cup. Then came Romário, Bebeto, Ronaldo... but for some time we do not have much to celebrate. That 7x1 against Germany was the last nail in our coffin. 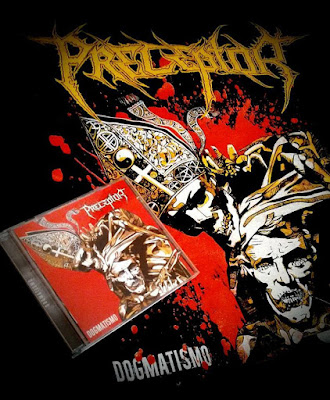 You have a great friendship with Sérgio Borges of HEADHUNTER D.C. Would you please share us some thoughts towards your brotherhood?
- Yes, Sérgio Borges is an old friend. Headhunter D.C. is one of the most persevering Death Metal band we have here, still active for so long. They have an old history in name of Death Metal and remain faithful to the style till today. That's rare around here for so long like that. They even lived here in BH in the early 90's when they signed with Cogumelo Records, traditional label from our town. Sérgio Borges is a Brazilian Death Metal Icon. 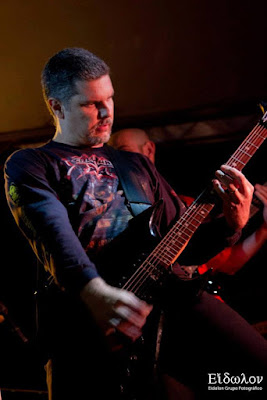 Muito obrigado por suas respostas! Please finish the interview by sending your preceptor words to the Death Metal community worldwide!
- We’re trying to make Death Metal simple, raw and straightforward. That’s what motivates us to keep alive the old Death Metal spirit, organic, with feeling, without the plastic sound that took over nowadays metal. Thank you very much for the opportunity and of course it would be a dream for us to play in countries like Slovakia and Hungary. Who knows, one day we could bring some bands from there to Brazil and we also make a tour passing around there… Those who want to know “Dogmatismo” can access our Bandcamp at: https://preceptor.bandcamp.com
We still have some copies of the CD and the official shirt of the album left; just contact us by Facebook or by email preceptorbr@gmail.com 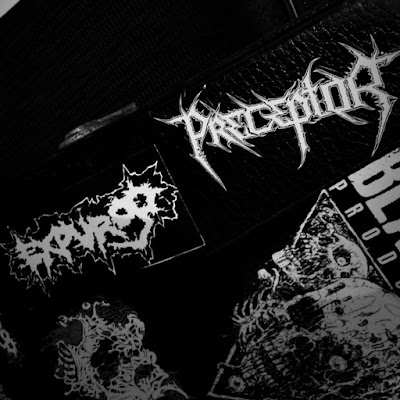 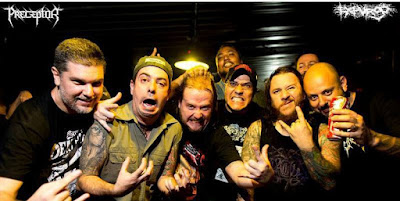 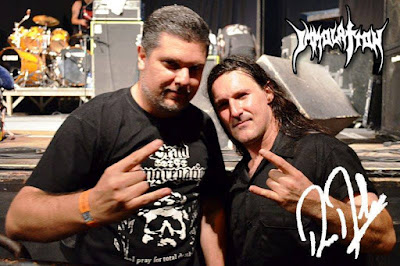