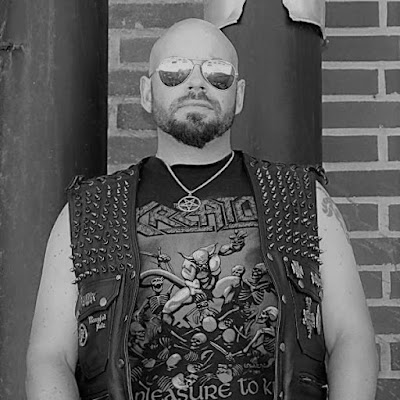 Hail brother Carl-Gustav, hope you are doing fine! First of all, we would like to congratulate you with the release of the awesome new material of Protector, called “Summon the Hordes”. It’s just brilliant! How went the common work with the legendary producer Harris Jones? What are your favourite tracks out of it?
- Hello Georgius. Thank you so much for having the interest in Protector and me as well. The support you give and your dedication to music. We are so thrilled over the new album and are very satisfied with the new record. We recorded the album both in Germany and Sweden. We recorded drums, guitars and bass guitar at the Phonostudio Johannisthal, Berlin. And Martin’s vocals were recorded at Wolfden Studio, Stockholm with Jocke Rydbjer and Harris Johns. After that back to Germany for mixing and mastering, everything went so smooth and Harris Johns is nice to work with in every way. He is very responsive and listen to our demands and ideas. I think it’s very important to have a conversation and an idea how you want to sound before you went into the studio. Favorite track is “Two Ton Behemoth”.

Who came up with the idea of recording it such way? I mean it sounds as it was recorded back in the 80s, especially I like how the drum-sound turned out. Pretty unusual sound production in general for a record out in 2019, isn’t it?
- It was our guitar player Mike that cracked the idea to record it with Harris Johns. We discussed how other bands have sound true to their discography and how the different studios were important for progress. The sound came out naturally and without too much compressing and the great mixing with Harris Johns it turns out this way. We really loved Tomas Skogsberg’s production and will surely record there once again, but it’s also important to adjust the sound a little bit and have some variation for our fans. It was also a small dream to us all to make a recording with both Tomas Skogsberg and now Harris Johns. Harris Johns have recorded amazing records Kreator, Sodom, Coroner and Protector’s “A Shedding of Skin” earlier, so we have loved his production. I am glad you notice the old school sound. I think there are not so much people that appreciate that kind of sound nowadays. So yes, there are surely some that don’t really like it. There is no record that I have found in 2019 that sounds that dynamic and live as well. The drums are recorded without triggers and I am really satisfied with the tuning and everything.

What are the responses to “Summon the Hordes” from the press and the fans so far? Did you receive any numbers/statistics regarding the album’s selling from High Roller Records yet?
- The response from magazines and reviews have been fantastic, so it seems the most of them like our songs and the harsh sound anyway. We have no statistics yet, so we don’t know how much albums we have sold. 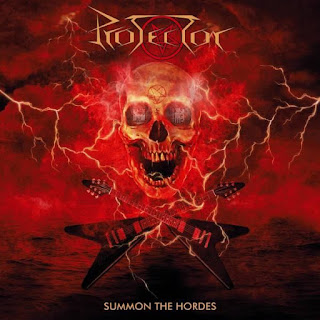 Your drumming is pretty fast and at the same time precise as well. So it would be great to know the names of the drummers who influenced you back in the time and the ones who still impress you with their skills these days? What kind of gear (drums, cymbals, pedals, electronics) you are about to use live, in the studio and at rehearsals?
- Thank you for the nice feedback. I try to practice as much I can, and progress goes slowly, but I try to get as much time as I can behind my kit and practice pads. Back in the days it was Pete Sandoval of Morbid Angel and Ole Öhman and Tobias Kjellgren of Dissection that influenced me most at that time. There were no YouTube channels and therefore you must learn everything by yourself. I have made lots of mistakes and have also learned wrong techniques and struggling was also present with some technical issues. Nowadays I have started learning via YouTube and trying to do exercises after Ukrainian musician Eugene Ryabchenko (Castrum), Austria’s Marthyn Jovanović and Italy’s James Payne. They are the top drummers for extreme music and have nice videos out there. Since I don’t play hyper speed black our death metal anymore, maybe it’s strange influences, but I try to be updated. The gear I use both in rehearsal space and sometimes live are Tama Artstar Esprit kit from ’97, which I’ve also recorded “Summon the Hordes” with; cymbals: Meinl MB20 14”, 16”, 18”, 20” and Sabian AAX 22” metal ride and Sabian AAX 14” hi-hats; Pedals: Trick Drums Pro 1-V. I have a low budget digital drumset at home Millenium MPS-600 with a Roland TD-8 module that works fine to practice on. 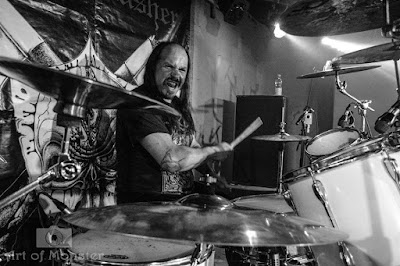 What are your experiences from Protector’s latest live performances? Protector will be going to play in Hungary this year, more precisely on the 1st of October. Have you ever been to Hungary? Do you like Hungarian metal hordes? If so, list us your faves, please.
- It’s always a fantastic experience to play live with Protector. The fans are so nice and we often have a really nice time. Last time we played was at our release party here in Sweden. It was intense and went awesome. Warfect a great thrash metal band from Uddevalla did a guest show and the after party was nice. We are so looking forward to play in Hungary in October and it will be the first time I visit Hungary, so I am really thrilled. I would love some sightseeing, but there will be no time unfortunately. Hungarian metal is great. There are lots of great bands.  I have had the opportunity to tour with Sear Bliss in 2002, then I played with Grief of Emerald. My favorite bands are Tormentor, Sear Bliss, Stress, Omen, Mörbid Carnage.

You are living in Strömstad, which is well-known about its glorious underground scene, especially due to the bands coming from the end of the 80s and early 90s. What bands are you going to recommend us nowadays?
- Well I mostly like extreme metal. I have a new favourite black metal band called Whoredom Rife from Norway that is on uprising. They really sound like black metal in the middle of the 90s: https://youtu.be/IrKuluuPTaU. A thrash metal bad called Warfect that lives 8 miles from here: https://youtu.be/AIRwjkwBRgc. And a death/doom metal band called Runemagick: https://youtu.be/UBmb3D3nLH0. This is what spinning just now at my record player.

Earlier you played in MÄBE? Tell us your memories from those years? Do you keep in contact with Mattias “Mäbe” Johansson? How do you like his new stuff?
- Mäbe is one of my best friends and I have nice and good memories of playing with Mäbe. We have done lots of nice stuff together. We had a hell of a time on a rock boat from Gothenburg to Kiel in Germany. I cannot tell you a specific moment, because there are too many, but we have lots of humor and funny moments, laughing, talking music and have great time in general. We have another thrash band together called Sarcastic that we always try to get time to rehearse with, but there is always something that come in between. We try to have contact now and then, but he is also busy making music and he is also playing records here at a local pub. I hope to have chance to visit him this summer. The new material of Mäbe is very good. If you could understand Swedish language, the lyrics are incredibly deep and he has written them with great thought, he ties in some local people in the lyrics that have passed a worse fate, old stories and some of his own. He is very poetic by himself and the music is captured by a dark concept. I like the music. Unfortunately, it is not so easy to understand for outsiders. 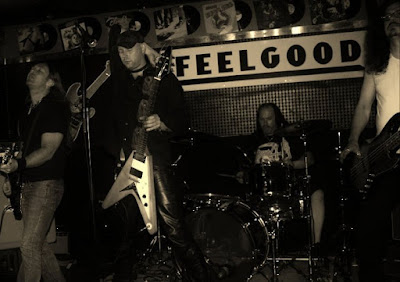 As far as I know, your nice city is near the Norwegian border. What kind of places, drinks and foods would you recommend to us?
- Strömstad is a town that lives on tourism. We have Norwegians visiting us for shopping cigarettes, candy and alcohol. There are lots of people on weekends and now in summer time there are people everywhere. We have some historical Stonehenge places you must see and have a very famous island called Kosteröarna. In Norway about 2 miles from here you should go to see the Fredriksten fortress in Halden. This is where the Swedish king Carl XII (Charles XII) was killed – in 1718 – during the war between Sweden and Norway. At that time a province of Denmark. Here is also a new Norwegian black metal festival called Imperium that will take place this weekend: facebook.com/events/2261984214022448. Strömstad is not so big, so you will find some nice local pubs and some are specialized on seafood. We have no rock pub or any concerts yet, but sometimes there are some small local metal gigs nearby in Halden, Norway or in Grebbestad and Uddevalla.

In our first conversation you told us that you’ve been invited by Jon Andreas Nödtveidt to play drums at his rehearsal place. Did you just jam with him or played some covers?
- I was twelve years old at that time, so my drumming was horrible, heheh. I remember that he tried some riff ideas, but you could just call it jamming. Anyway, it gave me so incredible inspiration at that time, I practiced drums, so my hands and fingers were full of blisters after the drumsticks. I remember practicing whole days.

At the end, please feel free to add any latest news from the Protector camp as well as to send your greetings to the Protector legions of the Carpathian region.
- We are just now rehearsing for the upcoming tour in September/October. I hope you Hungarian metalheads have time and interest and would come and see us play in Budapest. We shall deliver an awesome show that will take you back to 80s/90s and present of Protector’s history. More info at the event page: facebook.com/events/367354930513207 or at our Facebook: facebook.com/Protector.666not777.

Thank you so much for the support! Cheers, Carl Karlsson and Protector. 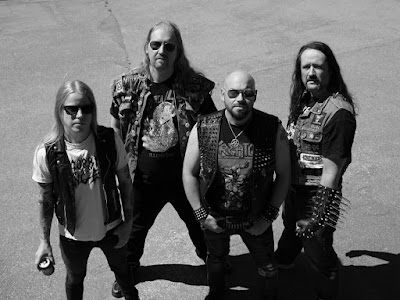