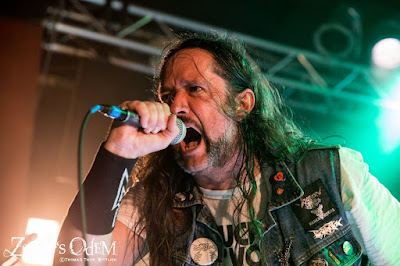 Hail Martin, you are very welcome to Archangel’s Lantern! Our congratulations for the excellent old school Protector album “Summon the Hordes”. Tell us the details of the recording of your vocals. What should we know about the current lyrics and cover art of “Summon the Hordes”?
- My three bandcolleagues Calle, Micke and Matte recorded their instruments with Harris Johns in Berlin. Because I don’t fly, and the trip from Stockholm to Berlin by car would have been too long, I recorded my vocals at the Wolfden Studio in Stockholm. Harris came up to Stockholm for the recording. The day after some friends of mine recorded the background vocals.
The lyrics are mainly about the same things, that I use to write about: Movie-inspired lyrics (Stillwell Avenue), Life on the road / Metal lifestyle (Steel Caravan / Unity, Anthems and Pandemonium / Summon the Hordes), a dedication to Celtic Frost (The Celtic Hammer), strange / bizarre themes (Two Ton Behemoth), “fun-lyrics” (Glove of Love) and history (Three Legions). Our bassplayer Matte wrote the lyrics to “Realm of Crime” and “Meaningless Eradication”, which have a political / social critic content.
The cover is inspired by the cover of our “comeback demo” from 2011, “The Return of Thrash and Madness”. The artist Andrej Bartulovic has given it a more professional look.

According to Encyclopaedia Metallum, you played in groups such as Spitfire, Golgotha and Inzest. Can you tell us more about them?
- Spitfire was my first band. That must have been around 1984 / 1985. It was a classic Heavy Rock band. We never recorded any demo or played live though, and I can’t recall writing any lyrics for them either.
Golgotha was a project that I had together with my friend Peter Laske (who also was in Death Attack and Heritage) and two other guys. This was in 1985, if I remember it correctly. We were inspired a lot by S.O.D. We rehearsed only a couple of times. We never played live, but we recorded a two track rehearsal (the name of the songs were “Kill the Nuns” and “Teutonic Tales”).
In 1986 I joined the band Inzest. Ace (guitar) and Peter Schulz (drums) had been playing together with Peter Laske and Michael Hasse in Death Attack. Now they had started a new band. It was a Speed Metal band, and the guys wanted me to sing like Paul Baloff. The instruments of the others were so loud though, that I had to scream, rather than sing, to make myself heard. It was good that I sounded like I did though, because when Michael Hasse heard one of our rehearsalroom recordings, he asked me if I wanted to join Protector...

How did you value the good old days of the 80s in Germany, especially in Wolfsburg? Could you recommend us some newcomer thrash/death metal bands from Wolfsburg and Stockholm?
- It was an exciting time of course. There were so many bands and new genres all the time. Even in Wolfsburg, which has just about 120.000 inhabitants, there was a quite vital Metalscene back then. We had a couple of bands that were playing live in youth clubs all over the city. The biggest band from Wolfsburg is of course “Heavens Gate”. I liked their “pre-band” Steeltower (one of the first, if not THE first Metalband in Wolfsburg) as well. There were two things that were not so good with Wolfsburg: There were not so many places were Metalfans could meet and listen to their favourite tunes (most often that happened like once a week in a youth club) and that we usually had to travel to Hannover or Hamburg (or other German cities) if we wanted to see a big Metal band.
I’m not so well informed about new bands from Wolfsburg and Stockholm, but I can mention “Cryptic Brood” (Wolfsburg) and my old band Phidion (Stockholm), although Phidion is not exactly a new band anymore (formed in 2003). 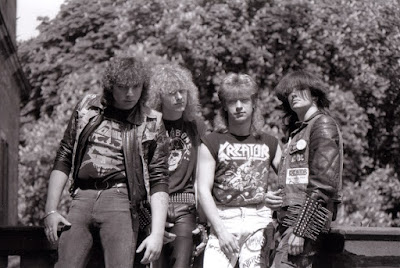 (Protector bandpic taken in Wolfsburg in the summer of 1987)

I have the same date of birthday as Michael Hasse (R.I.P.). Would you be so kind to share some memorable story/or stories about him?
- Michael was my best friend back in the 80s when I was a part of Protector. One evening, when we were drunk, we even became blood brothers. He did my first tattoo (the Alpha/Omega/Golgotha sign) just with a needle and some ink. He used to have the Sodom fanclub back at the time of “Obsessed by Cruelty”, so he knew Tom, Witchhunter and Blackfire quite well. When we played our first show in Germany (Braunschweig in 1987), he managed to get Sodom to play the headliner for the show. We had organized the concert by ourselves, and didn’t know what to expect. In the end around 500-600 headbangers showed up! It was an amazing night. 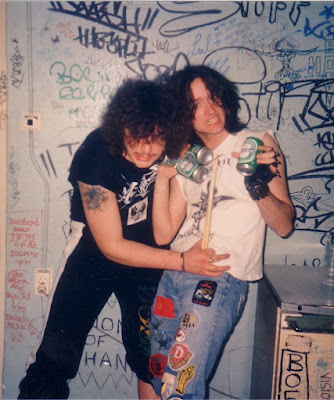 What is the situation with Zombie Lakes currently?
- We had great fun recording our two albums, but as far as I know that chapter is closed now.

Name us please your Top 5 Motörhead albums and Top 10 fave bands and their albums.
- Oh, this is difficult. There are so many. But I’ll give it a try:
Top 5 Motörhead albums: Iron Fist, Overkill, Bomber, Ace of Spades and Another Perfect Day.
Top 10 favourite bands and one album each from them:
Motörhead – Iron Fist
AC/DC – Highway to Hell
Slayer – Reign in Blood
Celtic Frost – Morbid Tales
Accept – Restless and Wild
Iron Maiden – Iron Maiden
Manowar – Battle Hymns
Sodom – In the Sign of Evil
Razor – Evil Invaders
Nifelheim – Servants of Darkness
...but there are, of course, probably at least 50 more bands / albums I could mention. 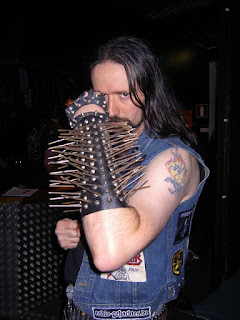 (2007, after the gig with The Protectors, Stockholm)


For September/October you’ve booked some European shows. What kind of setlist can the diehard Protector fans expect on those thrash rituals? Do you vary the live set per each show or you’re going to play the same set of songs each night?
- We will play songs from the 80s and 90s, and of course there will also be three new songs (one from each new album) as well. In Germany we are planning to play 1 or 2 songs more from the latest album, because we have played the old songs there so often now. In the other countries it will be more of the “oldschool-setlist” mentioned above. 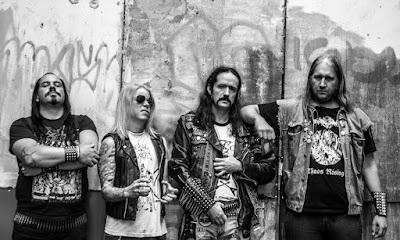 All of the sudden, the show in Košice (Slovakia) was cancelled and replaced by Ostrava (Czech Republic). I’ve planned to visit that show, thus really curious to know what’s happened with it? Will you going to postpone that cancelled Košice show for 2020?
- The organizer of the gig in Košice contacted us about a week ago and said that he couldn’t do the show, because he has to go on a business trip from work around the time of the concert. Fortunately, we were able to find an organizer who was willing to do a show on the same date with us in Ostrava instead. For the moment, there are no plans for a show in Košice in the future.

Danke schön/tack så mycket Martin! At the end, please send a message to the Carpathian hordes of Protector.
- Thank you for doing this interview with me. Stay Metal everyone! I hope to see you soon live somewhere. 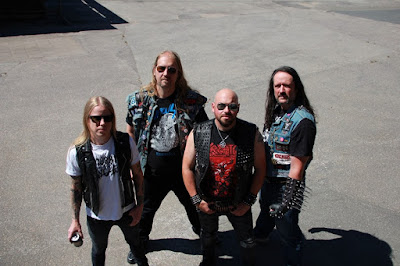