Interview with Robin Joelsson (OF FIRE) 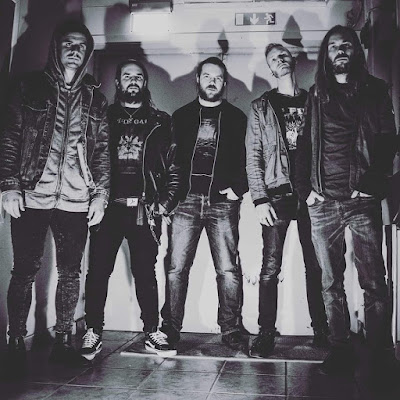 Hail Robin and OF FIRE! I congratulate you for your excellent third LP called “Dräparen”, which was released through the Spanish Art Gates Records. What is the reaction to “Dräparen” from the underground media and death metal fans so far? How went your common work with Master Tomas Skogsberg at Sunlight Studios?
- Hi! Thank you very much man. It's been quite good, we are really humbled by the reception so far. It seems that the people who heard it actually really likes our new album. Art Gates has treated us well too. The work went smoother than ever with the recording, we had no song finished this time just riffs and ideas, so we arranged the songs along the way and recorded it live in the studio. It turned out great working this way and Tomas was very happy with this way of working as well. Tomas Skogsberg lives and has his studio just outside Norrtälje these days so that made the process more easy.

If I’m not mistaken, your band started as Spasm in 2012 then you changed the name to OF FIRE, which is a great choice, in my opinion. Is there any common relation with legendary Dismember’s track “Of Fire” from their “Death Metal” album?
- Yes that is correct, there were 12 other bands with the name Spasm so we needed to change it. I was happy ‘cause I never really liked that name. We were struggling to find another name actually, and then Jonathan mentioned OF FIRE. I liked it a lot because of the song and what it meant for us as teenagers, we played it over and over on a boombox while drinking beer in our local park and it has moulded us into who we are some way along the way. Jonatan liked the sound of the name. Him and I grew up together although we have completely different personalities we have most times completed each other in a good way, he being more introvert and sensitive and me more extrovert and more spontaneous.

With guitarist Jonathan you played together in a death metal horde, Depraved. Tell us more about your previous band Depraved.
- Well it was more of a melodic death metal band with even some clean vocals, this was back in 2003 When we were 18 or so. Depraved was:
Me on vocals and guitar
Tobias Rydsheim on bass
Jonatan Thunell on guitar (second demo)
Anders Berndtsson on guitar
Jonas Holmström on drums
The band started to get some serious attention after recording two demos (Glimpse of Death 2003) and (Pieces of You 2004), for example we went on a bus arranged by Sweden rock magazine, they played the demos for 17 hours straight in the speakers and people couldn't get enough of it, and the venues we played where soon packed so time was right for Depraved but we didn't really understand it then, Jonatan moved away studying music, i was using  lots of drugs and Anders (who is the original guitarist in OF FIRE) went to Norway for work. Tobias (mastermind of Wormwood) started another punkband and Jonas drank a lot. So we split in 2005, we did try to reunite a couple of times but the spark was no longer there. A few bands later me Jonatan and Anders found each other again in 2012 forming what is now OF FIRE. A bit more adult and less chaotic minds but the same love for music as always.

What should we know about the OF FIRE lyrics? Which are the sources you get inspiration from? How goes the songwriting-process in OF FIRE?
- Well its most about nature, and the world I call Mother Earth. We have only one earth and there is nothing more or less, no aliens, no other planet and no religion. We have this and this is the only thing that we all know is true. There are true monsters in the deep, but the biggest monster is mankind. It’s not the typical death metal themes but my passion is in nature so I write about that. I've lived life the hard way and I don't find the darkness as a mesmerizing or a cool thing. I was born and bred from it. Nature is true and will never stabbed me in the back sort of speak. The music is mostly written by Jonatan and some songs by me, simply cause Jonatan is a genius. Rasmus wrote two songs on "Death do us all" (The Burden) and (the Shrine) but every song starts with some riffs and we put it together in the rehearsal place. We usually rearrange them several times and then I write the lyrics, it’s all about the feeling of the song and the pictures that comes in our heads when we play them.

I’ve mentioned in my Hungarian review at Kronos Mortus e-zine that during the listening of “Dräparen”, I’ve found influences of old Entombed, Dismember and Desultory in your music, what makes me happy as I’m an old fan of all of them. By the way, what are your favourite albums from these bands and name us your top 10 all-time LPs.
- It's hard for me to give you the answers you want because I don't listen so much to deathmetal anymore but I still like all Dismember records, my favourite is "Death Metal" of course. My Entombed favourite is ”Uprising”, I really love the rock’n'roll death feeling on that album, especially the last song "In the Flesh". I haven't listened to Desultory for a long time, I can't even remember when so I will have to pass on that one cause of that and get back to you later hehe.
About the 10 albums I’m going to choose my favourite albums despite genres in no particular order:
1. Iron Maiden - Piece of Mind
2. Sex Pistols - Never Mind the Bollocks
3. Morbid Angel - Gates to Annihilation
4. Autopsy - Severed Survival
5. Slayer - Seasons in the Abyss
6. Refused - The Shape of Punk to Come
7. Metallica - Kill ’em All
8. Sepultura - Roots
9. Pantera - Vulgar Display of Power
10. Black Sabbath - Black Babbath
And about a 1000 more records but I think I speak truly about this.

Unfortunately I couldn’t get any information about the cover artwork of “Dräparen”. Who created and what symbolize it?
- The Artwork was made by extremely talented Russian guy Kirill Semenov, Dräparen is an old forgotten name for the Wolf Witch is translated to the slayer. The theme of the album is about old Swedish stories and folklores around the starving and cold days in Sweden around 1700s-1800s when the Wolf ruled the Great taiga. People were starving and blamed it on the Wolf and still are today. So Kirill being Russian understand the whole thing cause of taiga forest unites us, he was the perfect guy for this cover.

I like a lot your killer voice Robin. When did you start to growl? Which are your favourite singers?
- Thank you very much, hmm sometime around 2000ish I was in High-school. I actually still see myself as a guitarist, but the band I had no singer so I was supposed to do it until we get a proper singer. But we couldn't find a singer so I laid down the Guitar to focus on vocals entirely and has continued that way since then. I mean good guitarists are not hard to find. I also played drums in a black metal band before that called "Satyg". But anyways, my favourite singer will have to be Mikael Åkerfeldt (Opeth, Bloodbath), Peter Dolving (The Haunted, Mary Beats Jane) and actually a guy I know Alexander Högbom (Demonical, October Tide, ex- Centinex).

What is the current situation with your live performances? Any upcoming shows to be mentioned here? I saw, you played in Romania and Russia a few years ago. How were those concerts? (I really hope to see you in Slovakia or Hungary live in the near future.)
- We are working on it, this fall will be dedicated to promote the album and play shows in Sweden. We'll go on tour in spring 2020 and hopefully some festivals during next summer. Actually we did tour both Slovakia and Hungary back in 2015 for our first album "Carnage fever" we brought our brothers in Wormwood along as well. But hopefully both Slovakia and Hungary will have us in 2020 again!

You are from Norrtälje. Would you be so kind to recommend to the readers some interesting places from your town, local foods and drinks?
- Hah good question! Well Norrtälje is an old town located by the sea it was a city of Vikings back in time and in the early 1700s the Russians invaded and burned down most of the town. I guess they paid back for 100 years of Vikings from here raiding Russia at first. But now it’s quite beautiful small town with lots of history to see like statues of Vikings and stuff. We have the great archipelago right here so a trip with a boat out among the thousands of small Islands is highly recommended in the summer. There are some restaurants that serve local foods as well like local fish, Swedish meatballs and local beer as well. But please visit Norrtälje in the summer time (June-August) in the winter time the town is almost dead because snow and cold.

Tack så mycket/thank you very much Robin, wish you all the best with your band. At the end, please send your ultimate thoughts OF FIRE.
- Tack själv and thank you for having me! Support the underground, buy our album Dräparen! 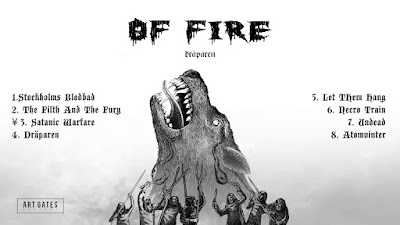