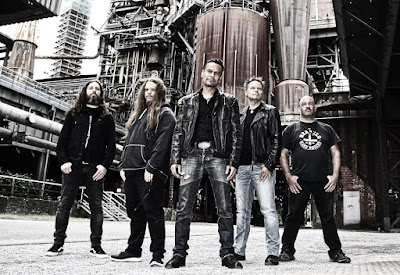 Hello Randy you are very welcome to my small blog. Hope you are doing fine! Let’s start the interview about the latest news of your excellent band, Sacrosanct.
- Thanx a lot Georgius, its really my pleasure! Up here things are going really well. Looking forward answering your questions.

How do you remember the beginnings of Sacrosanct back in time? On your first demo, called “The Die is Cast” played the drums Marco Foddis. What’s happened then? (as he stopped activity in Sacrosanct). Do you have any contact with Marco nowadays by the way?
- Yes, I guess we had some turbulent times due to the fact we left Pestilence and started something new. But still all decisions I made feel right, and nowadays I am happy to be able to do the things I love. SACROSANCT is and always was an important part in my life. Marco also decided at that time to leave Pestilence and we both started SACROSANCT as a new musical chapter. Later he left the band to join Pestilence again. For me it was clear we have to start all over again with almost everything. Not easy I guess because we both also had our influences on early Pestilence´s development. We found in Ronny a great new talented drummer and from there on we completed the line-up quickly. Michel Cerrone joined the band during the demo recordings, so he already did some soloing on that demo. As far as I know Marco is today working as a driving-instructor. I am sorry to say that we do not have any contact. 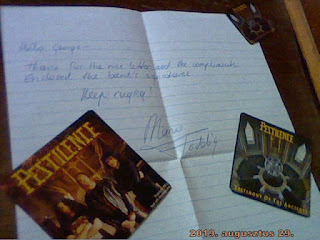 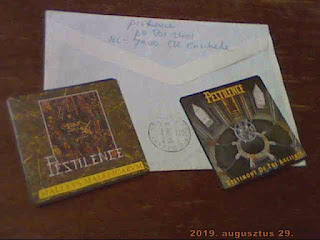 After the 3 great full length albums Sacrosanct broke-up in 1993. What was the main reason of split-up?
- Well, for us it was like a burnout feeling. We developed and become - music-wise- a master of „sitting between chairs“. With writing such an album like  „Tragic Intense“ we were ahead of the time, I guess. Of course a career as a musician was a dream. On the other hand I personally realized that there are more things in life that are also well paid. Something that is rare enough especially in the music biz. Furthermore I developed as a person and after I stopped with SACROSANCT and later Submission I concentrated on other things in life. Later I joined bands again but we did everything on a different (lower) level. 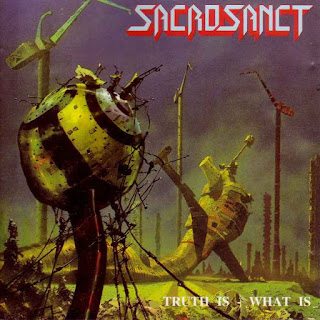 You reunited Sacrosanct in 2016. Enlighten the readers about the re-issues of early materials of Sacrosanct through Dutch VIC Records.
- Oh yezz, everything started with Roel from VIC and Iordan from Stormspell Records. Both were interested in putting out this releases again.
And for me it was already clear that there has to be a special USP and a reason to do a re-master release and it would be a hell lot of work for me.
I hate most of these „modern“ overpowered with way too much low end sounding re-releases. It was a must for me to treat our old stuff with respect and Max Morton directly understood the idea.
All remasters now have the best possible sound and we kept all the original digital music information and I am totally happy with the result. I worked almost two years on those remasters and later I put everything into the hands of Max who also did the „Necropolis“ engineering to ensure an awesome mastering and special vinyl mastering. The remasters have been delayed for different reasons that also counts for the delay of „Tragic Intense“. After laying the remaster job into the hands of Max everything went really quick. Then we had a delay concerning the booklets and so on. But now all remasters are available world wide on CD and „Truth Is-What Is“ is already available on vinyl via Lusitanian Music. „Recesses for the depraved“ and „Tragic Intense“ will be released later this year on vinyl. For me each release must makes sense for the fans so all vinyl releases will be on double vinyl with all bonus tracks. They will surly sound and look awesome! 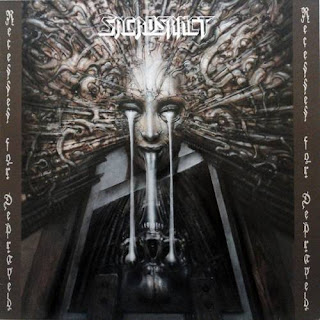 Sacrosanct latest album, called “Necropolis” was released 30th of November 2018 and in my opinion is a very emotional album. Would you be so kind to speak about “Necropolis”?
- Of course, its my pleasure!
The main question for me was: „What are we able to add to this metal scene nowadays?“
There are lots of modern sounding bands in the scene. More than enough if you ask me. But music is always a question of taste and as long as there are listeners all is fine for both parties.
I personally have enough of this „faster“, „higher“ and „louder“ mentality! We already have heard most of it. If you are able to play double bass at 300 bpm or if you are able to do fretboard sports, fine. Well done! I appreciate that! But nothing of this characterizes a good song for me or something most listeners - including me - will remember.
For example as we did the vocal lines for Necropolis we tried something different, and that perfectly fits to Richard´s style. Most vocalists in the metal scene sing along with the guitars. That’s almost a trigger, somehow it feels they have to. Rich is able to bring in ideas that add a further dimension to our songs. Because if possible he avoids singing along with the guitar harmonies. That’s the reason why there is a good mixture between our progressive elements and the recognition factor that makes it easier to follow and above that there are lots of strong harmonies (instruments and vocals) on the album.
And the most important element to make a song memorable is often the melody.
Even though we have tracks with a play time of more than 7 min. on Necropolis. It was always the song that has to come first. This album is in my personal opinion truly our masterpiece. We managed to write songs that have stories to tell and which are progressive and accessible at the same time.
I worked really hard on the tracks and it was amazing to see how they develop. There are so many classic SACROSANCT influences in there. Special harmonies, twin soloing stuff, unusual rhythms and so on. But…on the new album I was way more following the „song first“ principle. And that is surely the biggest difference to our old stuff. That leads to a further dimension and makes our songs more transparent but without loosing the complexity.
And the album is sounding so emotional, because it is emotional. For Rich it was furthermore a time where he could fight his demons. He lost his lady 6 weeks before we met again in January 2017. She was dying in his arms. And „The Pain Still Lasts“ will always be something you will remember during your own personal hard times. He did the whole song almost in one take. And we left it like this to save all his emotions. 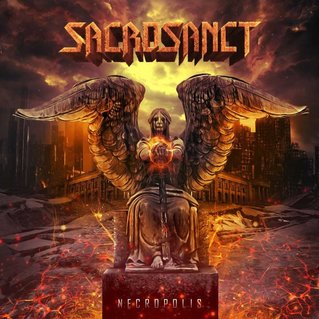 I’m a big fan of Pestilence since 1989/90 and I like a lot their materials with you as well. What are your favourite Pestilence tracks? How do you describe your Pestilence-times?

- To be honest Malleus Maleficarum was quite a challenge for me as a musician. I was playing guitar for two or three years then and so I learned a lot each day!
Pestilence is still a great band and Pat a great musician. We both loved the same bands but we also had a different taste. We were into Kreator, Infernal Majesty and VoiVod for example and all the American Death Metal stuff like Possessed, Death and so on. But I also still love bands like Slayer, Testament, Fates Warning, Dream Theater, Threshold, Nightwish you name it. And bands like Kiss, AC/DC, Iron Maiden were always heroes for me. But Pat was at the same time also more into the more extreme stuff like grind core for example. So we had a different vision. Obviously…;) For me it was always a difference…I love what I hear but for me this is not an option to play this stuff each day as a musician. And when it comes to Pestilence. Consuming is maybe still their most brutal sounding album, and after that he already did a very „controlled“ sounding album like Testimony and also experimented music wise later. So we are both happy with the way everything turns out I guess. Book closed. 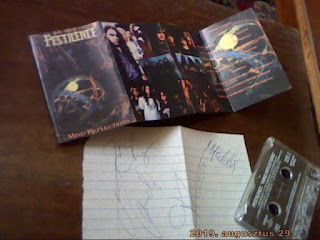 Submission raised in 1993. I just have on a copy-tape first Submission-demo from 1994, where Martin van Drunen was the vocalist and I must say, just amazing work. Share us some memories about Submission-period. Do you have any plans to release on CD Submission old materials? It would be really great! Why did you stop activity with Submission in 1996?
- As I mentioned above I needed a break from the music scene. As you know we did a demo together with Martin. After he left Submission to join his all-time faves Bolt Thrower we recorded an album which should be entitled  „Weltschmerz“. For that we signed a deal with We Bite Records which went into an insolvency during the recordings. At that time everything stopped for us. It would be too hard to plan a release for this or the early stuff, so I am actually wanna leave things as they are.

You were a guest guitarist on the German Neon Dream album, “Metropolitan West”. Tell the readers please about this collaboration.
- Oh yes, and I also played guitar on „Anodyne“, their first output. I never was a fan of the whole Gothic Scene but I managed to bring in all those metal influences, haha. Maybe it sounds funny but I also learned that less could be more music wise. So somehow I was happy with the situation, always knowing that my true passion was, is and ever will be SACROSANCT.

When did you start play the guitar? Which guitarists influenced you at the start and what are your current favourite guitarists?
- I started playing guitar when I was twelve I think. Ace Frehley was the initial spark. I love the playing of Marty Friedman and also a lot of these twin guitar orientated bands like Exodus, Fates Warning, Iron Maiden, Judas Priest you name it. 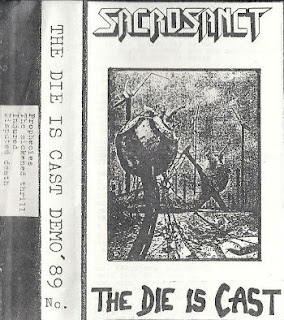 Do you have any special hobbies beside the music?
- Oh yes, I love doing sports, watching movies, gaming and hanging out with family and friends. I also love doing Whisky and beer tastings once in a while!

Recommend us please some interesting places from Gronau and local foods and drinks.
- Oh my god, there are so many nice places here in Germany and everywhere on this beautiful planet. We are mostly so self focussed that we do not recognize enough that everything is already turning into a Necropolis-like place. Damn the whole planet is on fire in the truest sense of the word! So let’s keep a good eye on what we are doing to remain it worth living.

Danke schön/thank you very much, Randy, wish you all the best with Sacrosanct!! Send a message to the readers at the end of the conversation.
- Thank you very much for the interview. Have fun with the things you are doing and respect and support all life on this planet. This is not an old hippie phrase it´s now more true and important than ever. An 16 year old girl understood that and she has all of my possible respect and support.
Stay Tragic! 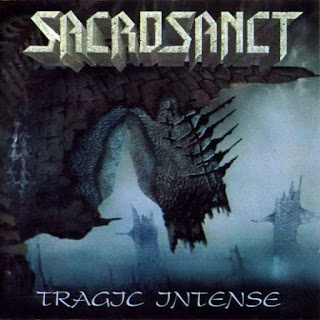 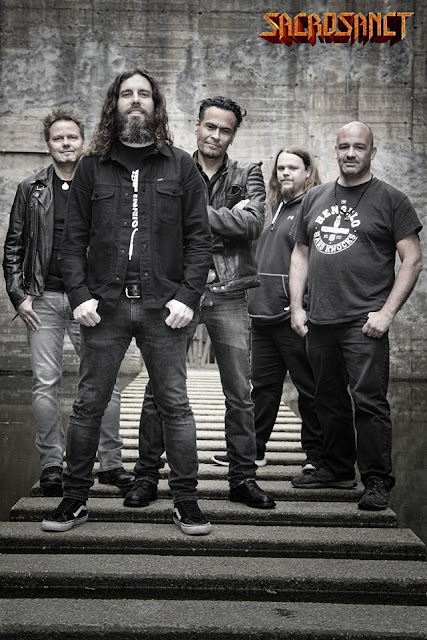