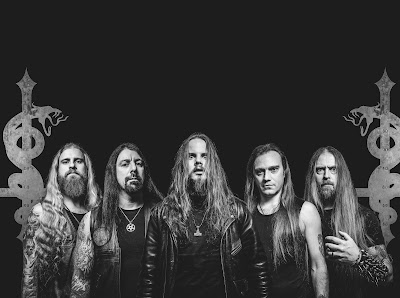 Hail Defiler, welcome to my own helvete Archangel’s Lantern! At first I would congratulate to Trident for the brilliant album called “North”. (In my Hungarian review in Kronos Mortus I’ve written, that your new album is my favourite Blackened Death one this year). How do you satisfied with the result of “North”? Who has been the main song and lyric writer? Share us all the important things about your new LP.

- Greetings! And thank you, truly nice to hear that you enjoy the album. We are all very pleased with the results of the recordings and eager to start playing the songs live as well.

I believe we are all equally represented in the writing process, but the general method in which a Trident song is conceived is through a base riff and sometimes also a complete concept idea written by Reaper. Thereafter the other members work their respective instruments and ideas around that core, usually starting with the percussions, then additional guitars and Bass. I write the lyrics to the songs during the musical writing process whilst listening to the rehearsals and early recordings.

Where do you get inspiration of your lyrics from?

- I’ve always been fascinated by spirituality in different forms, the struggle of good and evil, history, warfare and disease. So the themes that become part of the lyrics are usually directly derived from these subjects.

The music we create speaks to me in a very peculiar way, It’s almost like the lyrics write themselves and I let it guide me. I dream and think almost constantly, and the songs make order in a very chaotic part of me that I’ve chosen to name Defiler.

Trident made an awesome lyrical video to the “North” track. Do you plan to make another lyrical video and/or a clip in the near future?

- We recently released another lyric video to the track “Death” from the upcoming “North” album, and we are also working on a music video to another song at the moment. So there is definitely more things on the way!

Juanjo Castellano created an awesome artwork for “North” which absolutely fits to Trident’s music in my opinion. How did you meet with that amazing Spanish artist?

- We needed an artist to make the album art, so Ricardo at Non Serviam Records contacted Juanjo Castellano and sent some words and parts of lyrics for inspiration.

I can safely say that we were more than thrilled with the results. 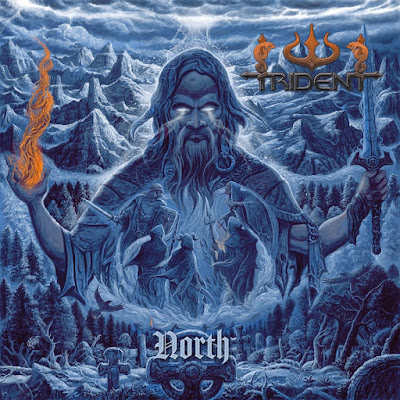 When and how did you sign to Dutch Non Serviam Records?

- We’ve been between labels since the release of our EP “Shadows” and since we already started writing music to the “North” album at that point, we needed representation. Ricardo at Non Serviam Records has been a friend and ally to the band for a long time now, and since he enjoys awesome music, it felt like the obvious decision when we inked a deal with them.

It is not a secret that I’m an old fan of Johan Norman (since early 90s) he is one of my favourite guitarists from Sverige. What are your favourite tracks/albums from Johan’s past hordes (Satanized, Decameron-demo, Dissection and Soulreaper)?

- To be completely honest I never listened enough to “Satanized”, “Decameron” or “Soulreaper” to have a good opinion.

Although I absolutely love the “Storm of The Light’s Bane” album by “Dissection”, The track “Thorns of Crimson Death” is a pure masterpiece. I know it can be disappointing that it’s not some obscure recording no one has heard of… But that album is a huge milestone in my personal taste in music.

What are your favourite singers from underground nowadays? By the way, do you play any musical instruments?

- The last couple of years I have had a hard time keeping up with the underground scene, can’t really tell why because I don’t know. Sometimes I have tons of new inspiring tunes and voices but for the moment I have nothing exciting to share about that.

Nothing to serious but I do play some guitar from time to time, wanting to take some time in a busy life to learn the piano and strings like Violin or the Cello because of my love for classical music. Besides that not enough I’m afraid.

Did you play (or will play in the future) some covers live with Trident?

- We have not played any covers yet (as far as I know) and neither have we planned on doing so in the future. But who knows? 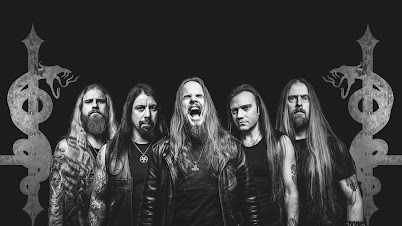 What is your opinion about Central/Eastern European underground scene?

But with my unprofessional perception of the field it feels like there is a greater demand on extreme music throughout the continent than up here, and it seems like the sound is more preserved/untampered than some of the mutations of extreme metal we have up here in Scandinavia.

Unfortunately I’ve never been in Scandinavia/Sweden yet but I hope one day I will have a trip to visit your nice lands. What places and museums could you recommend to me?

- Sweden is my country of birth and it’s an absolutely marvelous place that Swedes generally can’t wait to escape for sunny beaches and expensive holidays elsewhere at least once a year. But many of the people I know have missed out on major parts of our home country (Including myself). When in Sweden I would recommend taking at least a small trip out into the woods and seize the opportunity that comes with right to public access. I’m personally most impressed with the vast forests and mountains above the halfway point of Sweden but most of our national parks and woods have their own character.

I was born on the west coast of Sweden in the town of “Göteborg” (Gothenburg), and in fact both me and Johan live in the same neighborhood on the Island of “Hisingen” west of the Central City.  Gothenburg is a beautiful harbor town with a lot of small Museums and renowned Microbreweries, so it is definitely worth a visit. The Capitol of Sweden is “Stockholm” located further to the north on the east coast and has some impressive museums as well as the Royal Palace so this is also a must visit for anyone interested in Sweden and its history.

Tack så mycket/Kiitos, Defiler! Wish you and Trident all the best and I really hope to meet you live very soon! Send please some thoughts from the North to the readers to complete this conversation.

Thank you for the awesome review, hopefully our paths will meet along the roads we travel.

To the readers I would want to direct some strength through turbulent times. We are all survivors, even if some are more unaffected than others through the pandemic. But I’m convinced that we all miss the live shows and events we used to take for granted, and It’s my highest wish right now that we get through this and are able to deliver on a live tour next year. Until then, stay strong stay true.  //Defiler 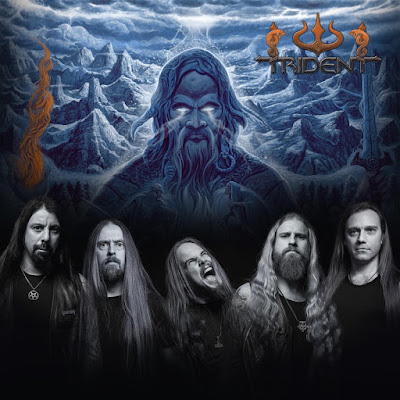