(Questions compiled by Cornelius of Encomium and Georgius) 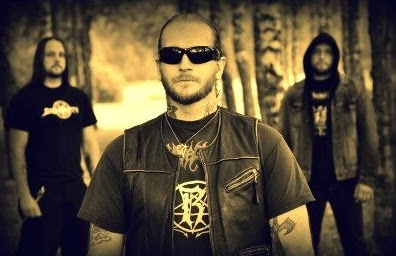 "The following is an exciting interview with Peter "Pete Flesh" Karlsson, guitarist/vocalist/composer behind dozens of great Swedish Death/Thrash/Doom/Black bands. There's really no need to say more, better read Pete's answers and dive into the dungeon and lair of THE PETE FLESH DEATHTRIP!" Cornelius of Encomium

How many tracks do you plan to record for the 4th album of THE PETE FLESH DEATHTRIP and when it will be published officially?

- The album is already recorded and hopefully we will see a release on Pulverised Records this autumn. It was a really long recording process, 2 years. I decided to change studio from the well known The Abyss studio (with Tommy Tägtgren) to studio Beast and work with Peter Bjärgö (CRYPT OF KERBEROS, TYRANT, ARCANA, etc.) as a producer instead. I only live 4 miles from the studio so I could really take the time to work on one instrument at the time. Also Peter had some other recordings, shows, etc. to take care of meanwhile. But I was not in any hurry; this album needed this time to take its final form. I wrote and recorded 9 tracks for this album. It could have been less, it could have been more. The process was going on all the time till the mastering was done.

On "Fallen Bliss" we have heard the vocals of Micke Broberg (UNANIMATED, CELESTIAL PAIN). How many guest musicians will be on "Mortui Vivos Docent"?

- Actually Micke guest sings on half of the album. On one track we shared the vocals through the whole track. First it was supposed to only be guest vocals on 2 tracks, but I noticed that his voice would be perfect for some more. I really tried to find the right balance between him and me. Also we both not sound the same; there is a cool contrast I think. This album is made for people that listen to an album from start to finish. I tried to capture and create the true essence of what T.P.F.D.T. is all about, why I do this and the purpose behind it. Micke also did some lyrics. And this was the first time ever I let somebody in and be a part of the creative aspects. Adde from VINTERLAND, TYRANT, THE BLACK is the guest drummer on this album. It was really cool to finally work with him. We had not met in more than 10 years. We used to party when MAZE OF TORMENT and VINTERLAND hung out (MAZE OF TORMENT's first singer, Pehr Larsson, was also a member in VINTERLAND). Rogga from MERCILESS should have some guest sings too. Also Andy from KING DIAMOND was more or less ready for a guitar solo, he had the track and everything. But it all ran out, because of different things, not because of Andy... just shit, you know... and it feels shit when he had the track and already had a solo more or less ready. But I hope next time :) Also with Rogga. Actually, there is a version of "Fallen Bliss" where John-John (ex-DISSECTION, CARDINAL SIN) plays the guitar solo. He was not totally satisfied, it was a test. Then personal things happen in his life, becoming a father, etc. So there was no time at that time to continue. But that will also hopefully happen on the next album. I will not use Micke again. Every album will get its own "sign", even if he did a bloody great work.

Tell us please about your lyrical concept. Do you continue themes on anti-christianity, evil & death?
- My lyrics have always been about me and my views on life, death, religion, suicide, filth & fuck-ups. If I hate something I have the ground for my hate. I'm not a 14 year old emo kid that just hates the world, because he should. If I write about filth it's because I have lived in filth, not because I am a 14 year old emo kid and my parents didn't get me a new guitar. People that not are in the scene and just go after the big radio channels can ask me why I hate stuff like IN FLAMES? I say that I don't hate IN FLAMES, I just can't relate to their expressions, the words don't speak to me. It's not IN FLAMES fault that they are big, the world just looks like this & people are just too lazy to go deeper into their souls for a greater purpose. When Blackie Lawless sings "I'm a wild child, come on and love me" that is more evil and have a greater purpose for me than the emo teen angst. It's like when people says that they are Christians and believe in God, but they never go to church, they only use it when it comes in handy. Or when Satanist only uses the Baphomet around the neck, but would shit their pants if saw the Devil. For me it's all about different forces in life and the universe, then it's up to you how you explore it and use it. If music and expressions like IN FLAMES satisfies you, that's fine with me, really. But never say that I'm immature, because I have my expressions... Then you have all my hate, in a greater purpose. 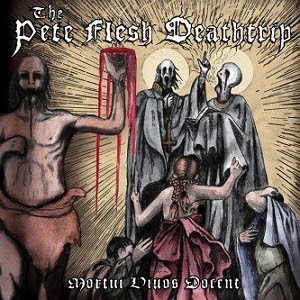 The awesome cover-art for your new album was made by Erik Sahlström. Who came up with the cover idea? Tell us more about this alliance.
- Yes, Erik did a bloody great work this time. I had the title "Mortui Vivos Docent" for the album and we discussed some ideas, but I give all the credit to him for the final result. He has done most of the artwork for my FLESH project, also for DECEIVER, MAZE OF TORMENT, SERPENT OBSCENE (Sweden's most underrated Thrash band in my opinion). He was also the second singer in MAZE OF TORMENT, first in DECEIVER, singer in SERPENT OBSCENE. Today he sings in GENERAL SURGERY. We have been friends for many years. 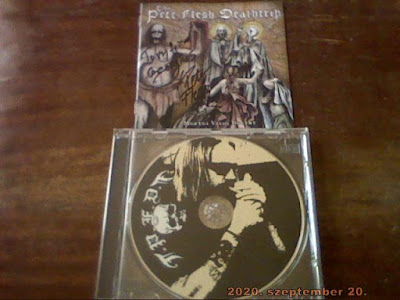 (an awesome gift from Peter, dedicated 'Mortui Vivos Docent CD - G)
Do you think about live shows or maybe about a tour for THE PETE FLESH DEATHTRIP?
- Maybe some festival shows. A tour would be really hard. First I must find the right people to do this with.

There was a video interview with you taken by Hellen Jacobsson and Marcus Boqvist for their art school class. It was very impressive to watch out this short of art film. Tell us your personal impressions and also recommend us more of this sort.

- I was just myself. And to be honest, looking and hearing myself is maybe not a thing I like to do. I watched it through fast and gave them an OK to put it out. They have also helped me with most of the FLESH, DECEIVER, THROWN tracks, to put them out on YouTube.... I'm a technical idiot. Of course I thank them for their interest in my music. I know they have done an interview with some painter as well.

You've uploaded a new THROWN track "The Two Embracing Souls of Skies", which is very sad and emotional. How many tracks will you create for that project?

- First I was not going to put that track out, but I finally did after some consideration. I like and listen to a lot of stuff and also then get influenced. I like a lot of long instrumental parts, music that grabs you and you paint pictures on your head. I listen a lot to 70s ALICE COOPER, PINK FLOYD, DEAD CAN DANCE, etc. Actually, THROWN did an album in 2007 called "The Suicidal Kings Occult". That was a project for me where I could play drums as well... just put in different stuff. This demo sounds a bit different, but I have never said how THROWN should sound. Right now it feels like it would take a very long time before I would do a track again. The idea must come to me first.

Tell us in short about the bands of your past. Which was your favorite and why?

- I started my first in 1988, called LEPROST. Then a band called NECROCIDE. The first demo I was playing on was with EMBRYO. We did 2 of them. I think one of them will be out on a 7" vinyl. The drummer (today in CRYPT OF KERBEROS and BLOOD MORTIZED) is taking care of that. Then we have HARMONY that became TORMENT and that became MAZE OF TORMENT. HARMONY did some demos and promos (collection of promos released on CD by Konqueror Records). MAZE OF TORMENT did 5 albums with me on guitars. Then I quit. Then did one more after that. I started DECEIVER and FLESH at the same time. Today I only have FLESH (T.P.F.D.T.) that also is my fave. Of course I'm proud of all albums that I have been on. The first MAZE OF TORMENT album "The Force" is a jewel for me. Those days it was harder to get out an album. 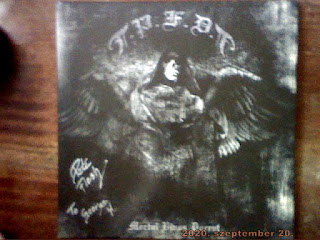 (another gift from Peter, dedicated  The Pete Flesh Deathtrip-vinyl 'Mortui Vivos Docent' - G)
What do you think about the actual Swedish Death/Thrash/Black scene? Do you have any favorite hordes?
- I guess it's good. Everything from DEMONICAL to WATAIN. A lot of quality stuff I must say. Also the gig scene starting to grow again. But I must say, even if I still read mags, get tips from friends, etc. and try to support the underground I seem to fail in time, so many bands. Some of my all times faves: DISSECTION, BATHORY, CANDLEMASS, NIFELHEIM, MERCILESS, DISMEMBER, CARDINAL SIN, KATATONIA, AT THE GATES, GROTESQUE, CARNAGE and some more.
Have you any interesting hobbies beside music?
- Hanging out with my son. Discussing all kind of stuff, while fishing or playing football. I like a lot of reading and watching all kinds of documentaries. Just developing my views on different stuff and subjects. Consuming information to get ideas for lyrics or music. I can spend whole days on YouTube just watching interviews with bands. I like to see how other people relate to their own creativity. Yes, I can even watch an IN FLAMES interview; I'm very open-minded in that sense. If I don't like a big phenomenon, I always get curious why I don't like it. Some people say that I like to think a lot.... sometimes unnecessary.
Tack så mycket! Last thoughts are yours to the readers...
- Bloody thanx for the support, really! Hail the Hordes! Anyone is welcome to drop me a line for more information.
E-mail: peteflesh@hotmail.com | facebook.com/peteflesh |
MySpace: http://www.myspace.com/peteflesh 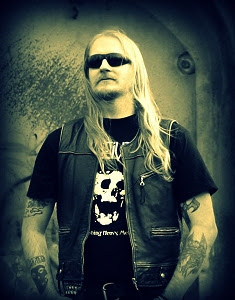