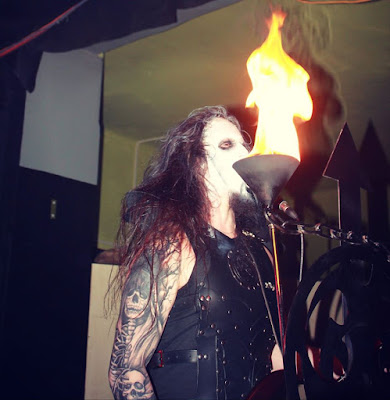 Hail my old mate, Darianth, and Hellcome to Archangel’s Lantern! First of all tell us briefly about the beginnings and rising from the ashes of your black horde. What does Andartar mean by the way? Which bands have influenced you the most back in the day? When did you start to play the bass? Do you play the other musical instruments as well?
- Greetings to you and the readers, and thanks for this opportunity.
For me Andartar is, essentially, that private, inner world present in everyone in some form that protects you from negativity around you.
It would be hard to pinpoint which bands have influenced me the most, as there are many to choose from. I was about 14 when I got to know the bands Marduk, Mayhem and Dark Funeral. Even back then I felt that black metal has such a charge to it, so to speak, that it will become a constant presence in my life, that it will be more than a passing flicker of rebellion. After that I did my best to widen my knowledge about the genre and the bands (eg. Dissection, Naglfar and Ragnarok). As far as Hungarian bands go I’d have to say that Christian Epidemic has been the most influential. Even after all these years I still listen to their music.
I was 16 when I first tried my hand at playing the bass. I went to a Napalm Death concert beforehand, and it basically blew my mind. That was where I decided that I’d like to take up music, more specifically playing the bass. Besides the bass I’m somewhat familiar with the lead guitar, although I haven’t quite mastered it as of yet.


I’ve watched Andartar’s first official live-video, called ”Folyók útján” (On the Path of the Rivers), the one which you have recorded at the I. Blackened Mysticism Festival. Congratulations, great job! Enlighten us on the process of clip-making and tell us some more about your performance at the festival.
- First of all, thank you for the compliment.
Peti and I have thought that that we needed something before the release of the EP that would serve as a kind of “sample” for our audience. That’s when we got the idea that we could create a video from the footage of our first concert which would be an introduction of both our music and our stage performance.
About the festival, or – I should say – festivals: the first one was on the 11th of March and the next one will be on the 10th of September, to which we are expecting bands not only from Hungary and the surrounding countries, but from further away as well. Those who work in the underground are well aware that it’s not easy to organize events like this, but at least this way they are organized only by those of us who work on this wholeheartedly. 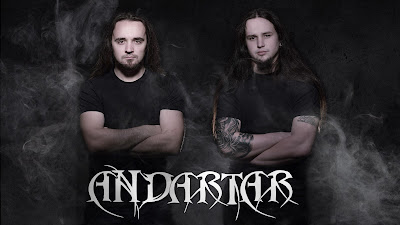 You are using Hungarian language in the lyrics. Will Andartar remain strictly Hungarian, or it is possible that you’ll release songs in both Hungarian and English in the future? Who is writing the music and lyrics of Andartar? Do you have a special conception for the band?
- In my opinion Hungarian is quite a colorful and expressive language, so I’d prefer it to English as long as we stay intranational, but I also know that if we want to go international it would be easier to establish ourselves with English lyrics.
Writing the music is a complex process. I write guitar sections and lyrics and then usually have a get-together with Peti to compose the structures of our songs from my ideas.
To tell you the truth, there’s no real conception to talk about, as my lyrics have no specified themes. I think the best thing about lyrics is that everyone can decide what they mean to them individually. Reading a specific line, for example, can stir up deep emotions in one person who can connect it to something from their past, while another person maybe just sits there thinking “what the hell is this crap?”.
How was the reception of your first fest, I. Blackened Mysticism Festival? (I really hope that you will organize new ones very soon )
- As I’ve mentioned before, the next festival will be on the 10th of September. At the moment there are two confirmed performers besides us: the band Order from Transylvania and the Morgon from Germany. According to our plans the festival will be organized once or twice every year and we’ll try to make improvements as we go along.

How would you characterize the underground movement/scene of Debrecen? (back in the day and now)? Which bands/fests/shops would you recommend to the readers?
- It’s a sad fact that nowadays there are less and less people attending these types of concerts/gigs. About 10-12 years ago there were about 300-400 attendees at such events, today it’s considered good to have about 100. There are fewer youngsters to whom live music appeals. Instead they download music, or watch a music video on various websites and spend the price of a concert ticket on something else. This attitude is regrettable if you ask me, but my experience is that it’s quite typical.
However, it’s great to see that there is considerable effort put into livening up the scene. In regards to Hungary I think for example Rockmaraton is top-of-the-line, as they are known to bring world-renowned performers to their audiences. Then there is Rockpart where you can also encounter some big names. If we are talking specifically about underground I’d say the most prominent events are Inner Awakening, Full of Anger and Total War Fest, and I very much hope so that soon I’ll be able to mention Blackened Mysticism Fest alongside them. 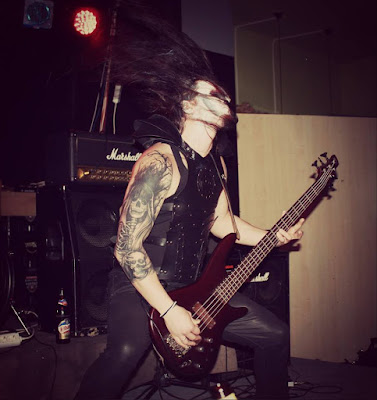 What should we know about the future plans of Andartar? What about new releases and live shows?
- In the last weeks of May we’ll start recording our EP which will have 4 songs and which will be released in July if everything goes according to plan. Also, the first Andartar T-shirts and sweatshirts will be produced soon. After that, from autumn, it’s concert season for us. In September we’ll attend Uzhgorerot festival, the II. Blackened Mysticism Festival and recently we’ve been invited to the X. Transilvanian Deathfest in Kolozsvár/Cluj-Napoca.

With your previous band, Angerseed you’ve played perhaps 3 times + one time with Nigromantia in my hometown. Were you satisfied with our headbangers? Any memories from live performances in Uzhhorod/Ungvár?
- That’s true; I’ve had the privilege to visit Ungvár both as a performer and as a guest more than once, and I had a great time on every occasion. We had a fantastic atmosphere on every concert and I had a blast each time. The audience was great, they really outdid themselves. We’re really looking forward to getting on that stage with our current line-up. 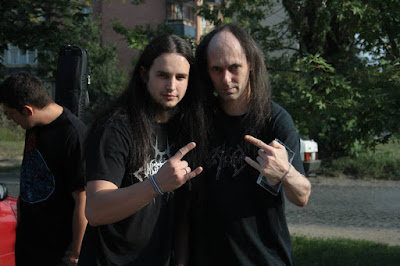 I know it is a hard question but what is/are your favorite track(s) of Bloodlust (yes, I remember your old band ;)), Angerseed and Domhring?
- I do have some favorites, for example the Pass of darkness from Domhring and Society Slaves from Angerseed’s new album.

Do you plan on playing some covers with Andartar at live in the next concerts? Please name your favourite bands/albums (5-10). Have you got any special hobbies alongside music?
- I think covers are great, but we can’t overdo them as we’re not a tribute band. In our last two performances we played two covers: the 12th rising from Naglfar and the Hail Murder from Dark Funeral. We’ll see if there’ll be any more in the future.
My favourite albums are:
Marduk - Heaven shall burn
Dissection - Storm of the lights bane
Mayhem- Mediolanum Capta Est
Christian Epidemic - Eltörölt világ / World erased
Mgla - With hearts toward at none
Naglfar - Diabolical
Dark Funeral - Diabolis interium
Ragnarok - In nomine Sathanas
Immortal - At the hearts of winter
Slayer - Show no mercy

With my day job and the band I have a limited amount of free-time which I like to spend by simply relaxing or travelling. 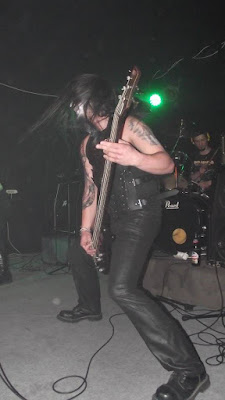 Archangel’s Lantern is Eternally dedicated to the Glory and Victory of Jon. (It was a great feeling for me to play Dissection’s mighty ”Night’s Blood” at live with Andartar in January, 2010, thanks so much for that!) Share some of your thoughts with us about Jon Andreas Nödtveidt, please.
- That really was a long time ago... Of course it’s a great memory for me as well. It’s a pity that I couldn’t see Dissection at live. Because of that I had no opportunity to get to know Jon in person. But from my point of view he always seemed like a very strong-willed individual who stood by his ideals and opinions, and who created something great as a musician. Both his work and his character influenced and will continue to influence many people. 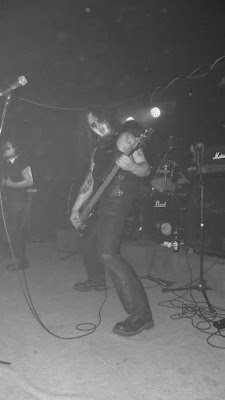