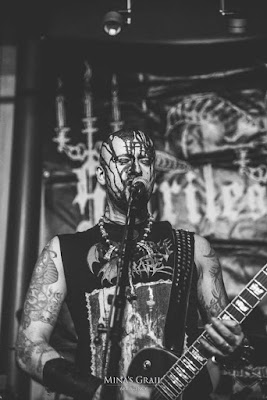 Hail brother E.I.-M. you are very welcome to Archangel’s Lantern again! I’m so thankful for the amazing CD-s you sent me this year (Sacrilegious Rite: “De Poetica Tenebris” and Lunar Chalice: “Night Poetry”. How was the reception of these two excellent materials among the fans and underground ‘zines?

- Thank you very much for the interview again and for your words regarding the two mentioned releases. The reactions were pretty good so far. The potential which had been brought into them, had been noticed, which is important for everyone involved. And for sure we are working on new material for all bands which I’m involved in.

As far as I know, Sacrilegious Rite had some changes in the line-up. Would you be so kind to present the current members of your band?

- Besides me there is A., my right hand on the second guitar, on drums we’re working now with John Berry who’s also involved in Slaughter Messiah and Nocturnal and on Bass, but only on studio records, there is N., who also performs with me in Lunar Chalice. We have several candidates who play live bass. On tour it’s Alessio Medici from Italy and when it’s about to be local or in our surroundings, there is Aaron Feller, a young but promising talented musician. 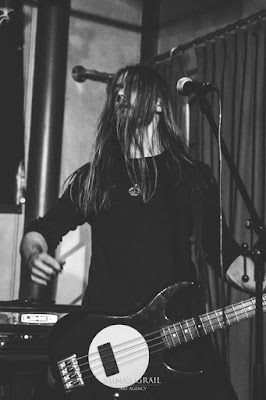 Tell us more about DE POETICA TENEBRIS. (song writing and recording process, lyrics, cover art).
Does your religious point of view and lyrics of Sacrilegious Rite have a common connection?

- Totally! Sacrilegious Rite is my tool of expression.... it expresses my view on the world , my inner and spiritual journeys through the realms beyond and my personal look into the abyss. 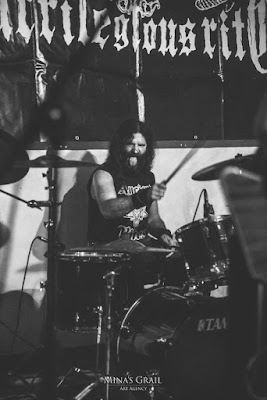 What is the actual situation with Sacrilegious Rite? Do you work with new tracks? How was your tour in 2019? Share some thoughts about it please. Are Sacrilegious Rite playing some covers at rehearsals and live?
- The actual situation is pretty busy at the moment which is good. We’re about to enter the studio soon but our progress gets always ruined by this Covid situation. It’s hard for an international line up to cross borders and to meet each other. But we made a big progress within the last months and we’re ready so far to record two releases. But for sure we have to warm up again as soon as we are able.
The tour in 2019 was good. Sadly the session drummer we hired was not so much up to the task. The music was not what he’s been used to. But he tried his best. Who’d been on the road with Infernal Execrator was a killer experience.
Sacrilegious Rite planned to release a compilation tape which will include old demo material as well as the songs of the splits with Ungod and Bestial Holocaust. What is the latest news of this?
- That’s been a while so far as we talked about that. It seems that we’re going to release a compilation which another songs and some which are going to be released in the future. On which format it will be released we don’t know yet. Guess pretty sure on CD maybe on vinyl which I would appreciate I think I can tell you more about that on a year. 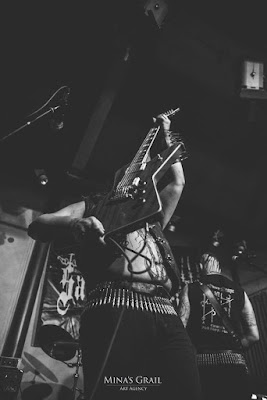 Let’s talk a bit about Lunar Chalice new stuff, namely “Medieval Cults of Heresy”. Tell us all the important information of this awesome EP. What should we know about your lyrics?
- That release went pretty good ha seen spread far.  Not sure it gets the attention it deserves but the underground changed a lot. We all know that. People seem to be less and less interested in physical records. But I may be wrong. It’s very hard nowadays to spread you intellectual and musical creation. But let’s see what will come from it.
The lyrics deal only with medieval heresy as the title already proclaims. It serves the main lyrical concept of Lunar Chalice. 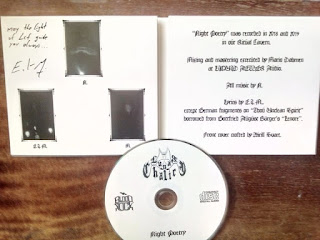 (dedicated Lunar Chalice: "Night Poetry" by E.I.-M.  -G)
In our private conversations you told me you started an international Black/Death project, namely Gloriam with members of Crimson Moon, Precaria, Ritualization and Sivad. Enlighten the readers about all the news and future plans with this horde.
- We recently finished all recordings for the first EP called “Gateways to the Black Absolute”. We’re just waiting for the artwork to get finished. It will be released on a 7”.
The original and founding line up was different but it destroyed itself, luckily and granted new members to the final. In that formation we recorded the latest EP and are already working on another release.
The line up so far is:
The Hermit on guitars, Scorpious Androctonus on bass, Principivm Angvis on vocals, Blastum on drums and me on guitars. Sadly Blastum leaves here because of other duties and a lack of time. But we knew that from the start we’re grateful that he realised that EP with us. He got replaced by Asaf Meiden who played in Mortuus Umbra and also plays today in Deathsiege.

If I’m not mistaken you are involved in a German black metal band, Corona Mortis, as a vocalist. Do you have any plans to record a new material in the near future?
- I would not consider myself a member of Corona Mortis. The guys of Dethroned are good and longtime friends and we did it for "the pleasure". I think actually they are going on with new material. But as I said, I am not really a part of that. Nevertheless it was nice to work with them.
You are the owner of Morbid King of Devastation Records. When did you start your label and why stopped your activity with it?
- Yeah, tales of the past. I am not really a business man, maybe one reason why I stopped it. I also lack of social competence... so, dealing with other people's bullshit is not of my strength. In fact I get quiet and fast pissed when people annoy me their "important opinions and problems". I don't give a shit and I push "complicated individuals" far from me... with age you get more and more picky and you can't take everyone around you. I started it 2016 and ended it a year or 1,5 later. I worked with Infernal Execrator, Slaughter Messiah and Thornspawn. Interesting experience, no doubt, but I really don't suite for that kind of work. I am a musician, I compose and perform, I don't distribute or do business.
Which kind of books have you read lately?
- Actually I started H.P. Lovecraft stories again. Actually it's "Reanimator" again. I never get tired of Lovecraft. I also read an interesting book about ossuary aesthetics. It's called "Eternal Rest", written by Anna-Katharina Höpflinger and Yves Müller.
What countries have you visited recently and which interesting places have you seen in 2019?

- In times before Covid I visited a lot of countries, mainly in Eastern Europe. The tour alone brought me there but I also like to travel a lot in private with my wife. We visited Italy in January, Milano and Genova,  for sightseeing and visiting friends.

Danke Sehr/Thank you very much, brother! Send some thoughts please at the end of the interview.

- I thank you a lot for the interview my longtime, brother. I hope we'll meet one day and have a blonde or two. I really enjoyed the questions, proving the speed it has been answered HaHa. Wish you all the best and I am happy to be a part of ARCHANGEL's LANTERN, once again! Danke sehr! 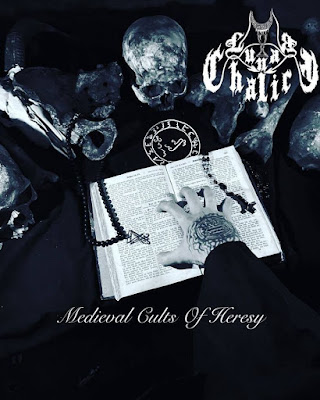