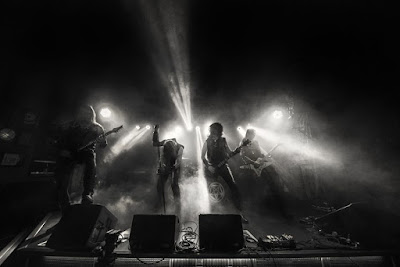 Hail Sebastian, you are very welcome to our small Inferno, Archangel’s Lantern! Our congratulations to you for the awesome new video called “Mirror Black” and we can’t wait to listen to whole newest album “Dawn of the Damned” soon. Would you be so kind to share some important info about this video and new album? (songwriting process of Necrophobic, recording/mixing with Fredrik Folkare and awesome cover art by Necrolord)

Sebastian: The video for "Mirror Black" was shot on two locations as we wanted a bright and a dark side. The lyrics are about going through the portal into the underworld. It is about the opening of the mirror. Magnus Götlund who has directed both "Blinded by Light", "Enlightened by Darkness" and "Revelation 666" shot this video. I wrote most of the songs and lyrics on this album myself. It is a very personal album, almost a Phoenix rising like story line. All of this came from year of depression and my own experiences of intense work with dark magic. Fredrik Folkare produced the album. He has done all our albums since Hrimthursum and is as important for Necrophobic as the other members. Necrolord did our cover once again. It is the last part in a trilogy starting with "Darkside" then "Mark of the Necrogram" and finally inside of the cathedral with this new album.

Necrophobic gave to their fans Worldwide an excellent Live Stream Event from the Harry B James Club in Stockholm 21th of March this year. (with my closest friends we enjoyed a lot) How did you remember that unusual live set?

Sebastian: We had high hopes for this. Unfortunately the hard drive connected to the cameras crashed just minutes before the show. It was a great experience anyway. Unfortunately it is hard to organize things like this as people in the crew gets sick and it is hard to find new people. I am glad most people liked it anyway. Four of the songs are on the extra disc of the media book edition of our new album. The sound was captured in high quality and we decided to put that out as a bonus feature for the fans.

“Slow Asphyxiation” demo has its 30th Anniversary this year and “Unholy Prophecies” will have same next year. Are you going to do something special, as re-mastering, special edition box, new T-shirts?

Sebastian: No, I don’t think we have time for that. We talked about doing a t-shirt but Joakim hates the cover. I think it is cult.

How and when did you join extreme metal music-scene and decide to play the guitar? Where did you buy metal albums from? What bands/guitarists inspired you to be a musician?

Sebastian: I have been listening to Metal since 1983. I always liked the fast songs. I loved Accept and fast as a shark. From that I found bands like Kreator, Metallica, Destruction and so on. Then came Death Metal. I was in it for the first years but lost interest in the early 90’s. Soon after that I drifted more and more into Black Metal which I find much more interesting since it does not only build on brutality. I like the different atmosphere and use of eerie melodies that most Death Metal lacks. When I was young there were a lot of record stores in Stockholm. The best one was called Heavy Sound and they had all the obscure stuff. I could be in that store for hours deciding what to get.

Tell us more about your first hordes Exhumed/ Morpheus and your Death/Black metal project called Phantasmagoria.

Sebastian: Exhumed/Morpheus was the first bands I had with Johan Bergebäck. Also in the bands were Janne Björkenfjäll (Rudberg) David Brink and Markus Rüden. It was great times. We played live with At The Gates, Immolation, Massacre, Death and many more in the early 90’s. Phantasmagoria was just a demo I made in the mid 90’s that I never released. It was an experiment to see what I could come up with in a very short time. I think it took me 4 days or so.

You are with Johan Bergebäck practically always going to play together to different hordes. When and how did you meet him back in the day? Share with the readers your past activity in Black Trip/V.O.J.D and Nifelheim please.

Sebastian: I met him at school. We have been friends since we were 16 and 17 years old. We play very well together. Black Trip/V.O.J.D was a fun project. It lasted for about 5 years. It was based on Heavy Metal and Hard Rock. I learned a lot from playing a different style of music. I think that shows on the albums past and present those years. Nifelheim is probably my favorite Black Metal band of all time. It was an honor to be a part of that for those 12 years.

With Jon Andreas Nödtveidt (R.I.C.) you shared guitar parts on the “Insulter of Jesus Christ” (Damnation cover).  Are there any memories about that hellish cooperation? What are your favourite bands/tracks from Jon’s heritage?

Sebastian: I remember that he did not like to improvise. He wanted to write every note exactly before recording it. He was very serious about his guitar playing. It is very hard to choose any favourite track. The first two Dissection albums are my favourites. He was a fantastic songwriter and musician.

If we are not mistaken, you played first time with Necrophobic on the album “Darkside” as a guest musician in 2 tracks “Spawned be Evil” and “Darkside”. How did you join them back in time?

Sebastian: I was friends with the guys since the beginning.  When David left the band they started to search for a new guitar player. I was very close with Tobias and I had no own band at the moment. I tried out for Necrophobic in the summer of 1996. But for some reason they wanted to do the album “Darkside” as a three piece. I played two solos and I think David also did two. It was a transition thing. 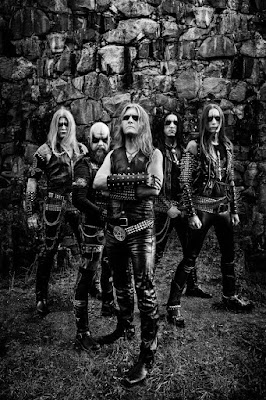 You are not only known as a guitarist but you created to different hordes just naming a few as Bajen Death Cult, Blackshine, Mykorrhyza, Unleashed, Tyranex, Firespawn  (and to Necrophobic as well)  artworks, covert arts, logos, designs, layouts. When did you start to deal with that and what is your latest work?
Sebastian: I have always been an illustrator. The last thing I did was the Firespawn logo. I just refined an idea they had so I did not come up with the whole thing. Nowadays I don’t have time anymore to do stuff like that but I sure think it is fun. But the music takes all my time.
What are your favourite albums from current Swedish scene and your opinion about my old friend Tobias Fongelius’ Voodus?
Sebastian: I love Voodus. And Tobias is a really nice guy. I have known him for ages. I think they probably are the best act around together with Kvaen and Jacob Björnfot, an amazing guitar player from the North of Sweden. The debut album The Funeral Pyre is beyond amazing.
Tack så mycket/Thank you very much Sebastian, our best wishes to you and Necrophobic. Send your thoughts please to complete this interview.
Thank you very much! Hope you enjoy the new album! Hails!!! 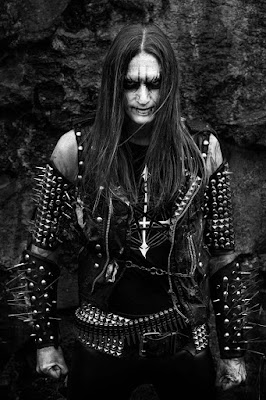