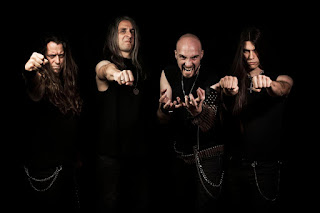 Hail brother Vandal you are very welcome to my small own inferno Archangel’s Lantern! First of all my congratulations for your latest killer album called “Psychosis”, it’s an awesome Death/Thrash metal attack! Would you be so kind to tell the readers your new LP track by track in your own worlds? (song and lyric-writing process, guest musicians and more)

Vandal: Hails brother! Thank you so much for your patience and dedication!

And also, thanks for your kind words about the album.

Uh, it’s difficult to discuss tracks separately, as they all together create a whole.

They are all focused on a mental health problems worldwide, and people who actually act mental to make some sick ideas come true.

Each song shows a different perspective on mental illness, and I tried to make it personal, as much as I could. I see it all the time how people with severe mental health challenges receive inhumane treatment, which makes me sick. False morality, corrupted systems, human values are lost, ignorance… that’s the world we are living in.

Psychosis is about a fight among different personas within one person. Who’s going to win, makes the future questionable.

"Hail Fire, Hail Death" is about eternal discrepancy of live and death, of fire and water, good and evil. Sides of a human nature when it comes to the burning point can be changed in a second. Igor Miladinovic was a special guest in chorus, with his killer voice, and I really believe that he is one of the best singers on Balkans.

Another track, "The Last Cremation" is a song about depression and suicidal thoughts of a young man. Ross Dolan & Bob Vigna from IMMOLATION were our guests on this track. Their contribution was of immense value to us, as they brought more power and energy to the song that emphasizes the importance of the theme it was inspired by.

Nuclear Deathrash is a legacy to new generations and our old friends, brothers, fans and warriors all around the world. It’s a salute to all the people who are keeping the flames alive.

But as I said, all the songs create a path for the listener to walk through and  contemplate the meaning and complexity of mental illness. This is in many ways a harsh and neglectful world, and we should keep eyes on each other as much as we can.  And when we add religious interventions with their hypocrisy and blasphemy, you see a world full of shit.

That’s why we tried to make a parallel between religion, mental state, hypocrisy, atrocity and lack of humanity, all in one, to make a message clearer.

Unfortunately I had no chances to have a trip to Hódmezővásárhely/Hungary (Lowland Fest) to see and meet you live in August this year. How do you remember that show?

Vandal: It was a great pleasure to be there and be a part o such a great festival. The moment we arrived we realized that it was going to be the one to remember. People were so crazy, moshing all the time, and after we finished the show, there was a huge party in the tents, so it was a long night. Promoters were amazing and they gave their best to make it the best for us! I really hope we will meet soon in Hungary and have a beer! 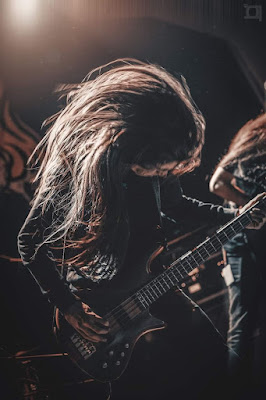 Infest played with Nemesis and Legendary Bombarder on the 2nd of October in Belgrade last time. I just suppose how it was amazing that event… Share us please your experiences.
Vandal: Uh, playing in our hometown is always special. The occasion was also very special, because it was 20-year anniversary of GROM RECORDS, which we is family. Bombarder was such a blast! Neso and the boys are really killing it, and listening Bombarder playing live is always a special event!
Nemesis is all-girls Death metal band, and if you still haven’t had a chance to listen to their music, please do, you will not regret it! They have the attitude, skills and sound better than many all-man bands ☺
As I’m an old headbanger I have a big respect to Bombarder for a long time. Infest joined together with other great hordes to play some covers for the honour of Legendary Bombarder on a “Tribute to Bombarder-Hail to Bombarder” (Grom Records) in 2013. I like a lot your “Horde” cover, it’s just excellent! Let’s talk a little bit about this unique release. Through the years Infest shared a lot of times the stages with Swedish Turbocharged. What are your favourite tracks/albums from them? Are there any interesting/funny stories from your common tours?

Vandal: Turbochared are family. We have so many funny moments with them, that we could make a book out of them ☺ From the alco-devastation every night and fart competitions in the van, up to all of the shitty stuff bands usually do on the tour ☺ I am a huge fan of Turbocharged, and it would be hard to pick a favorite song or album, but I could only say that, wherever you go, keep in mind that THIS IS AREA 666!

If I’m not mistaken Infest has been formed in 2002. Tell us briefly the history of the band. Which musicians (guitarists and vocalists) inspired you in the beginnings and have you any favorite ones nowadays?

Hmm, I am really open-minded to different genres of music, but modern age music isn’t really my thing. I was a huge fan of Hard Rock bands, and heavy metal from the 80’ and death & thrash metal from the 90’. Extreme metal was always fascinating to me, since I was a kid. I remember I was the only kid on the block listening to extreme music, and then you get to know more people that have the same interests. Later on, you either choose to quit and treat it as a phase or you commit to it as a lifelong passion. Back in the childhood days, I can say that Black Sabbath, Iron Maiden, Slayer, Metallica, WASP, Sepultura… and many more, were my favorite. As I was growing up, my respect and love for those bands haven’t faded, but I have also discovered a lot of new bands, like Immolation, Grave, Dismember, Vader, Unleashed, Cannibal Corpse, Suffocation, Dissection, Asphyx, Desaster and many more, all of which really influenced me greatly.

I must be honest and say that I am still trapped in the 90’ music, and I am not a fan of modern metal, so I haven’t discovered some new bands, but I really like the progress that old school bands make with the sound, production and stage performance. Serbian underground scene has a lot of great hordes. How do you describe your scene back in the day and our days? Let’s speak about your past activity in different hordes. Are you playing currently in other band beside Infest?
Vandal: Serbia has a lot of great quality bands! Really, people could not believe that these bands are from the Balkans. The biggest problem is the lack of support from the media – almost non-existent. Only a few dedicated maniacs are trying with webzines and magazines, which run mostly on love for the music since they too struggle to get financial support.
I also sing in a band named “Gavranovi”. Back in the days, I was a session bass player of the band The Stone, and before that, I was a guitarist in Decrepancy. Also, I was a part of Bane, Serbian Black metal band, and a few more projects, but Infest is the most precious and long-lasting one to me.
It is a bit hard question, I know but what are your eternal top 10 favourite releases?
Vandal: Uh, I hate this question ☺ but, let’s try:
Black Sabbath – Master of Reality
Iron Maiden – Somewhere in Time
Dismember – Like an Ever Flowing Stream
Immolation – Shadows in the light
Vader – Litany
Sodom – Agent Orange
Malevolent Creation – The Ten Commandments
Suffocation – Pierced from Within
Desaster – Hellfire’s Dominion
Morbid Angel – Altars of Madness
Do you have any favourite authors/books and actors/movies?
Vandal: Well, when we talk about the books, I must say that I am a fan of Dostoevsky and Salinger. And for the actors, let’s say Robert De Niro, Robin Williams, Tom Hanks, Jack Nicholson and many more ☺ The last thing I was blown away by was the Peaky Blinders series. 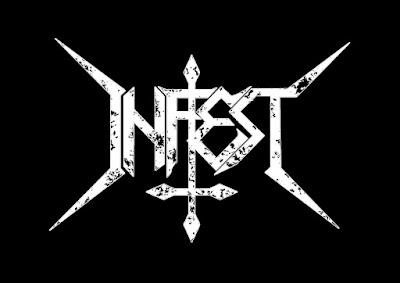 However, I’ve studied for 4 years in Szeged/Hungary but unfortunately I’ve never been in Serbia. What interesting places could you recommend to visit from your country and area?
I visited many times in Szeged a local Serbian restaurant and tried your tasty cuisine. What kind of Serbian foods and drinks are your recommendations?
Vandal: Serbia is a great county with many beautiful sights to be seen. Castles, rivers, monuments, many historical treasures. The main problem is that the system is rotten, and the nature is severely abused by foreign and domestic companies. And about cuisine, the best thing ever is Karadjordjeva snicla ( YOU MUST TRY THAT), and rakija, of course ☺
Also, Sarma, podvrarak, cvarci, and many more ☺ talking about it makes me hungry now ☺
Hvala/Thanks a lot brother! My best wishes to you, hope to see live Infest and meet you personally very soon! To complete our conversation send please some thoughts to the readers.
Vandal: Thanks a lot brother! I really enjoyed answering your questions. I also hope that your readers enjoyed it too ☺
Guys, try to keep eye on each other, keep the flames burning, never divide, keep the spirit of rock n roll alive. United, we can do it! WE ARE LEGION! 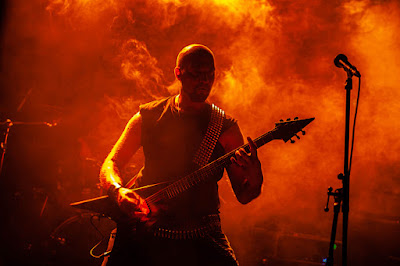