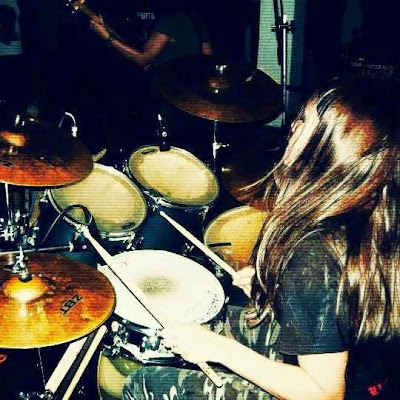 Hail Angela! Hellcome to Archangel’s Lantern! Perverse Suffering was born in 2010 with an idea of creating the first female extreme metal band in your hometown, Bucaramanga Colombia. Tell us please about the beginnings!
- Hail Georgius, firstly I want to thank you for your invitation. Perverse Suffering born in Bucaramanga - Colombia in 2010, with the intention of forming the first band of death female metal from my hometown and maybe in northeastern Colombia, because until then, it was not known the existence of a band with female members and we wanted to be part of the active positioning of women in metal music scene. Unfortunately, the idea to have an all-female lineup has not been maintained. At present we have male members in the lineup, they are excellent musicians and the extraordinary people, and they have made great contributions to the band.

What materials are you released still and enlight us about your actual line-up!
- We have the professional recording a single called "Sinister Mind", which was made in early 2012, with which we wanted to make known the band through the different tools found at on the internet, radio shows, etc. … Unfortunately we have not had the recording of the disc by the difficulty in keeping a stable lineup … The actual lineup of the band is: Karent Pinto - vocalist; Ruben Restrepo - Guitarist, Marco Galvis - bassist and Angela Pabón - drummer.

Who is the songwriter in Perverse Suffering and who writes lyrics? Tell us more about lyrical conception! What’s about your future plans? Do you play some covers?
- Writing letters is the task of the vocalist, I contribute, I like to participate in all things of the band and I have very clear the direction I want it to have Perverse Suffering… Perverse Suffering lyrics speak of internal conflicts that an individual immersed in pathological society in which we live, especially focused on the Colombia context… We prefer playing own songs, although some shows we played some cover as Dismember - Casket Garden and AC / DC - TNT (Version Six Feet Under)

How are going the things with your live-activity? What we should know about your local scene from your hometown?
- The scene of my city is particularly dominated by thrash metal, but there are bands of every genre: death metal, black metal, heavy metal, speed metal, etc ... in the last years has increased the scene, every day, there are more and more kids  who say they feel identified with metal music… There are also serious organizers, so here are organized very great events that participate at local and national bands. 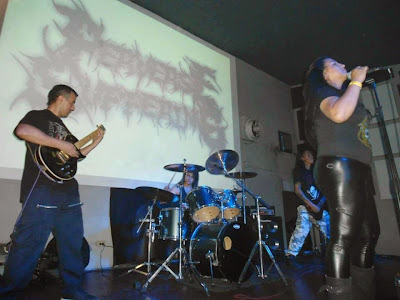 When did you start to play the drums? Which drummers influenced you and please name us 5 of your favorite ones!
- I started playing drums with Perverse Suffering, in the past I always had the desire to learn to play and tried it, but was very shy, and facing a scene dominated by the male gender, a scene which in itself, has always had a very radical trend, especially against women ... maybe I felt intimidated and unable to do. Finally I decided to do it when the idea of ​​forming Perverse Suffering arises, and now, I love playing drums and I regret the wasted years, but no matter, never it’s too late.
My 5 favorite drummers are: 1) Pete Sandoval 2), George Kollias, 3) Richard Christy, 4) Tim Yeung, 5) Lee Harrison

When did you become as metalhead and what bands/albums listened to that time?
- When I started listening to metal music, the bands and albums I heard at that time were: Metallica – Ride the lightning, Iron Maiden - Powerslave and Fear of the Dark, Sepultura – Arise and Roots, Pantera - Vulgar Display of Power ride the lightning. I had them on tape format, except the albums from Iron Maiden, who were the first I bought original Cd’s…. and there began this craziness hahaha…

Colombia is a very nice country with a strong and old underground scene; would you be so kind to speak briefly about your land (your region, hometown)? Which bands could you recommend us to listen to?
-Yes, Colombia is a beautiful country and we have a very strong underground scene, marked by a history of brutal bands...  In my city I can recommend these active bands: Supremacy Satánica (Black Metal), Crocell (Black Metal), Dark Manthra (Dark Metal), Metal Destroyer (Thrash Metal), Virgin Killer (Speed ​​Metal), Fire (Thrash Metal) Ignis Haereticum (Black Metal), Bonestorm (Death metal)… The rest of the country I recommend listening: Infernal, Inquisition, Parabellum, Masacre, Morbid Macabre, King, Nebiros, Reencarnación, Erzebet, Black Ceremony, Nocturnal Feelings, Death Kult, Utuk Xul, Dirges, No Mercy, and many others, it is a very long list.

What do you do in every day of life? Do you have any special hobby? Have you any favorite books and movies?
- I am a psychologist and a mother, I work in an institution who cares about the fundamental rights of children ... my hobby is playing the drums, I also practice sports, I hear a lot of music, I read, I travel (I enjoy meeting new places), go to concerts, go to the forest and that sort of thing ... My favorite authors are Nietzsche, Jung, Lacan, Kant, among others, and I love world literature, Arthur Rimbaud. Edgar Allan Poe, Kafka, Pablo Neruda, etc ... is a very long list… I love movies, especially horror movies and independent film, there are many that I like as Hellraiser, The Exorcist, Dracula, Jason, Freddy Krueger, Poltergeist, The Texas Chain Saw Massacre, The Shining Full Metal Jacket, Trainspotting, Taxi Driver, Natural Born Killers, etc..

I’m always so curious about the different kitchens worldwide.  Regarding your local cuisine, what foods, drinks, coffee, and tobaccos can you recommend?
- The food is delicious in Colombia, and varies from region to region, because of our territory rich in flora and fauna we can enjoy a variety of foods. But could not describe it, you have to taste our food ;)
ufff my region's food is delicious... when you come to visit my country, you have to taste the food of Santander:  Sancocho, Mute, Caldo con arepa de maíz pelado, ayacos de mazorca, morcilla con papa amarilla, tamal, mazato, chicha… I have no idea how to translate you the names of the food and drinks lol … and Colombian coffee of course you have to take it ;)

Have you ever been in Europe? If yes, where? (if not, I really hope that we will meet in your shows in the near future )
- Unfortunately I have not yet had the opportunity to travel to Europe and is something I hope to do someday ... in Europe, there are beautiful places I want to know, his landscapes are beautiful and your story is magnificent… So definitely, the old continent is an unmissable destination for me.

Maybe you’ve noticed, my/our web-zine dedicated to Jon Andreas Nödtveidt (Satanized, The Black, Dissection, etc). Did you listened ever Dissection and what is your opinion about Him as a musician, and a person?
- Dissection is a brutal band; each of the albums is a revelation… I understand that Jon Nödtveidt always acted according to his word, I do not know the truth, only those who really knew him, can attest to this... Dissection for me is just an amazing band and one of my favorites… I very much regret this tremendous loss to world metal scene, but each of us is master of his own destiny.

Muchas gracias, Angela! Wish you all the best with your band and send some Perverse Suffering thoughts to the readers!
- Georgius, I really appreciate again this great opportunity for us to include us on your blog, for me is a great honor and a great pleasure to be part of this ... to readers want to send a fraternal greeting from Colombia and I want to invite you to know my country and the Colombian metal scene, I hope you are interested in Perverse Suffering and will enjoy… and fully support the underground metal scene, only original music… black flame burns lml 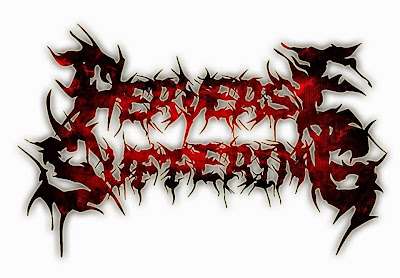