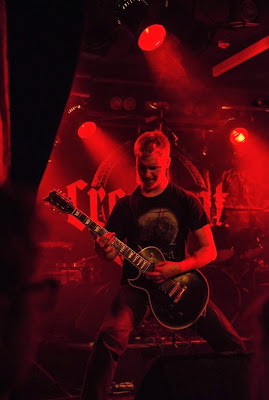 Hail Olli! Tell to the readers, please about the beginning! Had you played in any bands before Tuhonsiemen? Share  with us all the important information about your band!
- Hail, all the readers of Archangel's Lantern. I am the guitarist of Tuhonsiemen, a Finnish black metal band. I have been playing guitar for about seven years now, and Tuhonsiemen is my very first serious band. The band was formed by me, our vocalist and our ex-drummer in autumn 2011. We released our first physical album in autumn 2013, and it is quite close to be sold-out.

What means your band name, Tuhonsiemen? Who writes the music and lyrics? Could you please enlighten us  about lyrical conception?
- Tuhonsiemen is Finnish (quite an untypical word though) and it can be translated as The Seed of Perdition. I write all the riffs and most of the lyrics, but also our vocalist has written some texts. He has a darker, more traditional black metal way of lyrical self-expression, whereas I like more mystic and almost dream-like way of writing. Our vocalist has explored themes such as death, mortality, misery, torment and he usually uses the first person style of writing, which delivers some very strong emotions to the listener. I myself like to write more philosophical stuff, although the deepest insights are hidden behind different kind of stories or metaphors.

I’ve listened to through YouTube your tracks and I must to say they are excellent raw black metal hymns! Would you be so kind to tell more about your release(s)? On which label you released your stuff? Any future plans?
- We have only one physical release so far, and at the moment we are doing material for another. Our first album is "Temppeli", an MCD of six (six six) songs, which can all be downloaded from SoundCloud and also some other sites. So, to get a good picture of our music and us: go listen to the album.

Now tell us more, please  about your live activity! (past, present, future)
- We have played eleven gigs, and two more are confirmed. The best gig so far was the one we played in January this year. We were an opening act for The Crescent & Alghazanth at our home town's biggest arena for metal bands, the famous Tanssisali Lutakko. Our live shows are about intense energy and accurate playing. In the future we are planning to concentrate also on the visual side of the show. That means more aggressive performing and a lot of bloody mess at least. 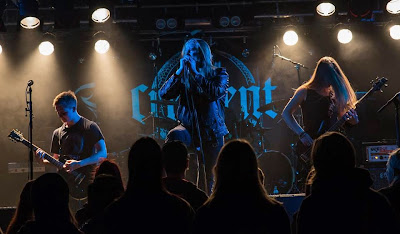 Suomalainen underground scene is so awesome with many great musicians/bands. Were you influenced by hordes of Suomi? (if yes, name us) Do you have any favourite Finnish bands?
- We like a lot of Finnish black metal bands and bands from other genres too, of course. To name a few of my personal favourites, my all-time favourite band is Enochian Crescent/ their "musical and magical continuum" The Crescent. Other great BM-bands are Baptism, Verge, Behexen, Valoton and Saturnian Mist just to mention a few. Some newer bands I like are Hämys, Curse Upon Prayer and Forlor.

When you started play the guitar? Which guitarists are your inspirations?
- I started to play the guitar about at the same time when I started to listen to metal music. Back then I was about eleven or twelve and dreamed of being able to compose good songs and also play them. I started to compose songs almost immediately when I got the guitar in my hands. Well, that small kid's dream is now filled and is being filled again and again until the day I cease to exist. I hope I can make out a few good riffs on my deathbed and then die with a grin, knowing I served my purpose here.

Your band, Tuhonsiemen from Jyväskylä. Tell us about your local hordes and if you don’t mind, about your town briefly!
- We have good local scene here, that has good bands from all the sub-genres of metal. (Actually, Lost Society is from here and I have seen several of their early days gigs, they have always had almost the same energy in their shows as they do now). Some good more underground-bands are Funerary Bell (black metal), Verge (black metal), Ezograh (blackened death), Apocryfal (death metal but with a lot of BM attitude in their music/lyrics), Morbid Grave (old school Thrash/BM) and Let's call it an accident (post-hardcore). There's not much to mention about our hometown, except the gig place Tanssisali Lutakko, which is known for it's sold out night's pure madness. Go there to see a good band, buy a big pint of beer and some booze, get drunk and lose a teeth or two in a mosh pit. 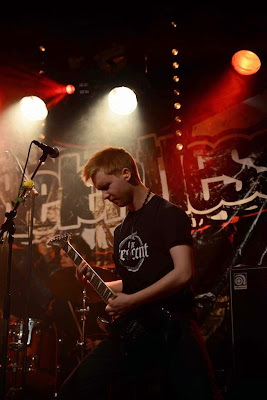 I like so much mythology, history, cultural traditions of Suomi. What the Suomalainen mythology means you? Explain, please the ideas and beliefs behind Tuhonsiemen.
- Finns had their own beliefs and ways way before the christian culture was brought in here. It's very sad that those ways are not highly recognized in school's teachings or in anything else either. Tuhonsiemen is not about Finnish mythologies, like some black metal bands such as Stormheit are. I believe that a man has a beast within, a divine beast that can and should be unleashed and let it grow to reach it's full potential. This is a painful and hard process, and a path full of dangers. It requiers a lot of wisdom and spiritual strength, and it is always a different kind of process for every individual. I believe that for me it is important to have this band as a channel to clear my visions about this. This beast is something that drives me to further enlightenment through losing myself in darkness that calls my name louder and louder every day.

Your top all-time favourite albums/books/movies?
- My favourite albums are the entire discography of Enochian Crescent the crescent's "Risti". Other all-time favourites are Dissection's "Reinkaos", "Kuolemanpalvelus" by Sotajumala and "Iowa" by Slipknot. Many others too...few of my favorite movies: V for Vendetta, Requiem for a Dream, Zodiac, the seven Saw movies and a Clockwork Orange & the original Psycho. I like to read occult literature and philosophy, lately I've read commentaries of Nietzsche and Kierkegaard.

Kiitos Olli! Wishing you all the Be(a)st with your horde! A message to the readers of Archangel’s Lantern...
- Fuck every "pure black metal"- definition, genre-terms should be born to describe what people do, not vice versa. So, people shouldn't try to fit their doings to someone else's ideals. Leave that shit for the organized religions. 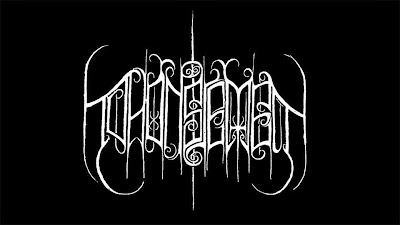