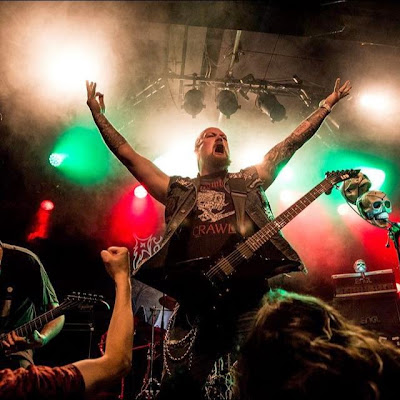 Hail Jonas! Welcome to Archangel’s Lantern! Tell us please, when did you enjoy metal music? What was your first band?
- Hi Georgius! I've been listening to metal since back in 1984 when I started school. Back then it was mainly bands like W.A.S.P, Mötley Crüe, Accept and Twisted Sister. And that interest has been with me now for 30 years. I found Death Metal back in 1990 and i guess that made me form my first band. It was a really shitty band hahaha. We were called Tomb. I wanted to play death metal and the other 2 guys wanted to play punk. I've never been into punk so we split up and i started playing in another band called Goreblast. Back in 1993 a friend of mine called me up and told me that a death metalband from Gothenburg needed a new guitarist. That band was called Deformed, and that band evolved into TAETRE later, which was my first real serious thing i guess.


You started with Puteraeon in 2008 and if I’m not mistaken, you recorded all the instruments on first two demos. Would you be so kind to speak briefly about the beginnings?
- Yes that's right. In the early 2000's I got bored with almost every death metal release. The music had become to polished. To nice and dull. I sat home writing complicated stuff and my girlfriend told me it sounded like crap. "Write some real death metal instead" she said. That was a real eyeopener for me. I got a nice Dismember-like sound and just started to right easy old school sounding death metal, trying to capture the old rotten vein of the music, that got lost in the early '2000-s. In the beginning it wasn't meant to be a band, it was just something i did for fun by myself on my spare time.


With Puteraeon you have 3 awesome old-school full-length + a split with Revel in Flesh. Who write(s) the music in general and please enlight us about lyrical conception of the band! How did you meet with your label, Cyclone Empire? What were reactions in metal press about latest masterpiece, ”The Crawling Chaos”?
- As you know, I did 3 demos first. I actually did everything myself on all those 3 demos. I spoke to Anders (drums) and Daniel (bass) about getting the project as it was earlier into a band. Around the time when we finally started rehearsing, we got  the deal from Cyclone Empire, much thanks to Ralf from Revel in Flesh who spoke both to us and Cyclone. We had like 5 offers before that but we decided to go with Cyclone Empire. At That moment we had 24 songs released on the 3 demos to use on the album. We wrote 2 new and used old songs and re-recorded them for the first album. Up to that i have done everything, all music and all lyrics. On the 2nd album Rune wrote 2 tracks and we co-wrote 1, the rest of the songs I wrote. On "The Crawling Chaos" Rune wrote 4 songs and I wrote 6. I've been writing all lyrics all the time. Nowadays, it's pretty much the same. Me and Rune write the music but everybody in the band comes with input and stuff, but usually when me or Rune present the stuff to the rest of us we have to basic structure complete, so the rest of us just add some ideas about it. Small adjustments really. The lyrics have been about zombies and such stuff in the beginning to evolve into more Lovecraft themes, this started on our 3rd demo "The extraordinary works of Herbert West". I got really influenced of Lovecraft back in 2008 early 2009. I got laid of from my work so i had to much time hahaha. It kind of stuck. Also, i think Cthulhu and such topics work really great with the kind of music that we play. I was a bit fed up with questions about Cthulhu and Lovecraft after our 2nd album "Cult Cthulhu" and we said, let's do something else on the next album, but, when i started writing lyrics for "The crawling Chaos" the Cthulhumythos was what inspired me again, so we decided to say "fuck it- we write about more Lovecraft stuff"! 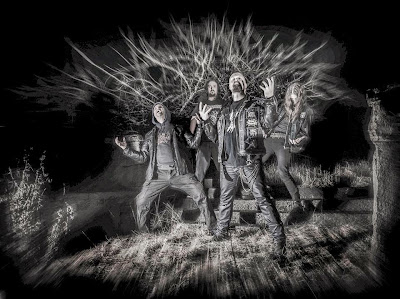 As I’ve noticed, You will share the stages with an awesome Swedish band, The Crown (release-fest) next year in January. Tell to the readers please a little bit more about this blasting event! What are the things about your live activity this year?
- Yes! I think this will be a nice start for 2015. This year we've only played in Sweden and I think we've done way to few gigs, but that's just it when you don't have a booking agent. It's hard as hell to get gigs. Festivals around Europe seem to go for the same bands, so I guess they are all signed to some mayor companies or booking agents. We are still very much underground, very much do it yourself, that's why we rarely play outside Sweden. If you have the opportunity to see us, don't miss it, we are a live act TRULY!

You are playing also in Taetre (the album called "Out of Emotional Disorder" is one of my favourites of 1999). What we should know about activity of Taetre nowadays?
- Taetre was more or less put to rest back in 2009 or so. We gave up on our rehearsal place back in 2010 I think and havn't rehearsed or even hung out in at least 4-5 years. I think the killing blow for Taetre was that we recorded a 4th album back in 2004/2005 called "Psycopath" that was never released. I guess that made it to hard for us to move on and being creative. 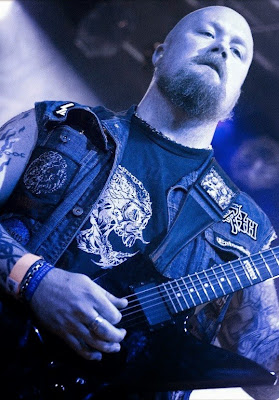 You enjoyed as a guest musician on some tracks of the albums of bands Just Before Down, Megascavenger and Ulverheim. Please speak about this collaboration a bit!
- All of these project or bands are run by friends of mine and just fun time for me. I guess I put a weekend all together on these 3 guest-appearances. Mainly I did it just to help my friends and to have  some fun at the same time.

I also like so much your artworks of Puteraeon. Who did them?
- All artwork have been done by friends of ours. Back on the first demo a close friend of mine since school Johan Ryding did our logo and just for fun draw up a zombie. I decided that would fit perfect for the cover for the first demo hahaha. Well he said later that if he'd knew that I would use it as cover he would have put more time into it as it was in his intentions never though of as anything more than a little thing on the same paper as he did the logo on. After that, from the 2nd demo "The requiem" and all the way to the latest album "The crawling chaos" a Christoffer Fredriksson has made all artwork for us. Christoffer is also a good friend of the band and have been with us on some gigs on the road helping out too. I usually come up with the ideas for the art and Christoffer comes with his input, we talk about it. Then he starts his magic and I guide him in my vision. The end result has always been great! On the new album he's done artwork inside the booklet for every song. An illustration deeply connected with the lyrics. I think it was really cool and I think the whole package looked really really good! 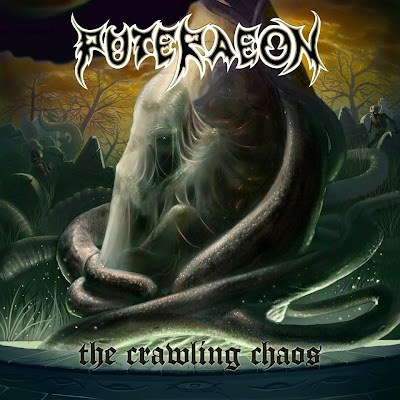 Swedish scene is so amazing with a tons of bands. Recommend us, please some bands from your local area!
- Hard question really. We live in a small town 30 minutes drive outside Gothenburg called Alingsås. Both me and Rune have grown up in Gothenburg though. But Alingsås doesn't have much interesting music in my ears. But some really cool bands worth checking out from Sweden is Turbocharged, Paganizer, Blood Mortized, Instestinal, Nominon, Bombs of Hades, Entrails, Smothered, Sinner's Burn.

Name us your all top favourite albums (if you have books and movies, them also). Do you have some special hobbies beside the music?
- I've always been very creative, but music has always been the most important thing to me. But i do a lot of sketching with pen too. Now, being a parent many of those things have been pushed aside a bit, there's simply not enough time for everything. Working, being together with my family and writing or rehearsing/playing with Puteraeon really takes most of all time i got. But when i got time over i really enjoy watching tv shows, drinking well crafted beers or playing the xbox. My favorite music is basicly the music I've been listening to for the last 30 years. My favorite albums differ in a way from month to month, but to name some of them Guns n' Roses "Appetite for destruction", W.A.S.P first album, King Diamond "Them", Mercyful Fate "Don't break the oath", Slayer "Reign in blood", Megadeth "Rust in peace", Napalm Death "Utopia banished", At The Gates "With fear i kiss the burning darkness", Dismember "Like an everflowing stream", Entombed "Clandestine", Grave "You'll never see", Dissection "The Somberlain", Carcass "Symphonies of sickness", Deicide "Legion", Morbid Angel "Altars of madness", Behemoth "Evangelion", Merciless "Unbound", Iron Maiden "Killers", Gorefest "False", Death "Symbolic", Mayhem "De Mysteriis Dom Sathanas", Sepultura "Arise", Cannibal Corpse "Eaten back to life", Pestilence "Testimony of the Ancients", Vader "De Profundis". I also listened a lot to the first Ghost album wich i think is really good, reminding of a softer more pop-like Mercyful Fate. When it comes to books i don't read that much nowadays as i did when i was younger, mainly as i said earlier because lack of time. But i managed to read the George RR Martin "A song of ice and fire", Love the show Game of Thrones too. Other authors i enjoy is obviously H.P Lovecraft, Clive Barker, Stephen King, Dean Koontz among others. Clive Barkers early stuff is absolutely amazing mix of horror and sci-fi. Other TV shows i like besides Game of thrones are, The walking dead, Sopranos, Boardwalk empire, American Horror-story, Hannibal etc.

What foods, drinks, cigars, tobaccos  can you recommend us from your area?
- There is a little brewery from south of Sweden called Brekeriet who's doing really good beers! Other good beers can be found at Grebbestad brewery, Gotland brewery, Ocean brewery!

Archangel’s Lantern is dedicated to Jon Nödtveidt’s Glory and memory. Did you meet Jon ever? Would you be so kind to share some thoughts about him?
- Sure, I met Jon many times back in the 90's. He lived for a couple of years in Gothenburg so we met mostly at shows but also in town and on tramps and so. Some close friends of mine were closer to MLO than I was back then, I guess they were some kind of "prospects" or close too at least. It was a crazy time back in the mid 90's for sure in Gothenburg haha. Jon as a musician was flawless I think. Every album with Dissection has been really good!

Tack så mycket Jonas, share your  Puteraeon message to the readers.
- Thank you so much for this interview! Readers! Check out Puteraeon and enjoy the madness! Ia! Ia! Nyarlathotep!