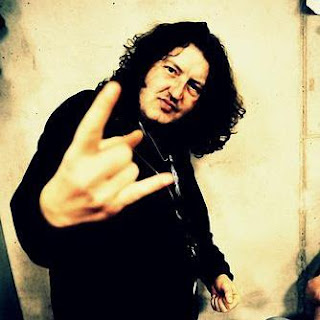 Hail Eric, Grand Judge Daniels! How are you now? We 've checked out a video about Grand Supreme Blood Court-show at Turock, Essen. How was your concert?

- Hi Georg and Sorin, I am doing fine, thank you! The concert at Turock was awesome, we had a great time overthere, and we also give our gratitude and thanks for the good time towards our fans visiting there.

G.: Grand Supreme Blood Court's debut album, "Bow Down Before The Blood Court", is one of my favourite Death/Doom releases of the last year. What is your most-liked track from your debut? Did you started to write some new riffs for the new material?

- First, thank you very much for you like our debut-album, that’s nice to hear. My personal track I like most is “Circus Of Mass Torment”, the fact was this track was composed as last and due to the fact the CD was becoming too short without this song makes it special also, the lyrics are killer-one, and the structure of the song is like continue and continue, the drive of the song is just great. Of course the other tracks are good as well, but this one I like most. Oh yes, ideas are always flowing around, Alwin and me already have some good material as riffs on the shell, we definitely gonna sort them out together and make a new song. But it’s on an easy going base, first we have to support the album as much we can.

Do You have any plans to make a videoclip for one of G.S.B.C.-tracks?

- It sure crossed our minds to do a videoclip. We like to do a killer live-one. However still the ideas are there, maybe after the release for the second album, not sure about that, but we still like to do one for sure. 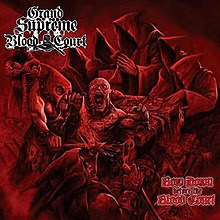 - Yes that’s true. I was asked by Grief if I would like to do a guitar-solo in one of their songs. I like their material very much, it has the pure soul for real doom/death metal, and that’s what I like and did. I heared it back later at the EP, and we both are very happy with the result. It’s not the way I gonna do often to appear as guest-musician, if the atmosphere gets me from the songs I have the urge to do it, but consider it as an one-time activity. I wish AG succes and good luck with their new EP. Just check it out people I would say.

G.:Last year you also did a guitar solo to one of bands of Rogga Johansson, Megascavenger, on the track "To Revel With Vermin". Would you be so kind tell about it?

- Also correct, Rogga asked me a time ago if I would like to do a solo-part on one of his songs he made, and it was far before the recordings for the Blood Court, so I was thrilled to record it. I did the solo at home, and sended it to him, and he liked it very much. I heared it back later and it was damn cool.

Sorin: Going back to the past you played death/doom for almost 25 years. Some other Netherlandese Death metal bands such as Pestilence, God Dethroned, Gorefest to name a few, changed their style to something new. Would you like to try something new too?

- Well, I realy don’t care what those other bands did or do concerning there playing style, that’s their decision, bit for me and I can say also us, we just play the real doom/death metal how it was and is mentioned to be. I realy cant understand why they will do that, maybe they felt bored of what they were playing, I don’t know, or it was trendy to play death metal. If style will change, believe me, the true soul will be gone. But I don’t speak and judge about other bands, what we know, we just do what we think are best in. We are no super musicians, but people don’t have to try to learn us how the right music is played with heart and soul. There are so much possibilities within our music, be creative, no style to change, or try something new. Its like, bands don’t have to think they are original nowadays, all kinds of metal is invented, the circle is closed. The challenge is how to bring it on an pure way.

G.:You are one of my favourite guitarists of Death metal and I'm always fascinated about your awesome sorrowful solos. Where do you get your inspirations from?

- Thank you very much for the kind and nice words, that makes my day! Well, back years ago around 1989 when I joined ASPHYX we were reharsing for the 2 songs 7” Mutilating Process, at the rehearsal I just played some long notes inside the song, it wasn’t hearable, but when we listened back the tape of the rehearsal, Bob called me and said, hey Eric what did you do there on the song..it sounds amazing. I was realy flattered about his words. I cant play fast soloing, only by tremolo, I like to abuse that thing to the core, but normal fast soloing I hate to play, so I decided just to play the solo’s very slow and doomy, it went super and it feels great to do. It gives more atmosphere. I play those solos only with a digital delay pedal, nothing special. It wasn’t planned, it just felt to play the solos this way. It are the base-riffs behind the solos which give me inspiration. When the right doom-riff comes up, the doom soloing is a perfect match for it. Not technical skills for that but I can say with all the feeling I have inside my body I play em.

Were you in contact with bands from Eastern Europe? Can you recommend us such bands from this area?

- As you know I was off from the metal-scene a long time, almost 9 years, so I had to dig up in a short time now almost 3 years to hear good metal-bands again. Sorry, you have to fill me in here for the Eastern Europe-bands, cause its sometimes hard to find the right and good bands. I follow the stream of facebook and when I am curious about a youtube vid, I click it. I hardly listen to music from LP’s or CD’s, I use the internet a lot. That’s one of the progress matters since the last years. The digital period is nice to develop and follow. The band I realy like is: Coffins, the tank rolling sound, the voice, all the right and pure ingredients of death metal. We play with them on the Party San. Hope I can buy a shirt from em there, looking forward to that!!

Which are your all-time favourite albums?

- I give you my all-time favourite top 5:

Riot - Fire down under

Sacred Blade - Of The Sun + Moon

As we noticed you are into movies also. Which ones are all-time faves and what movies do you wait this year?

- Owhh I have so many movies I like, this would be a very long list, but I give you also my top 5 favourite movies:

I wait for Evil Dead the remake and the new Texas Chainsaw Massacre. Also the new Die Hard I like to watch too. All this movies I haven’t seen yet, but for those movies I take time to watch them.

Could you recommend us some kind of Dutch tobaccoes and coffee?
- Well, I can only give you recommends about the things I like myself, it’s a personal taste, I like “van nelle export” tobacco, handrolling, I am not a cigaret-freak, I don’t like the filters on cigarets, and I like douwe egberts coffee fresh made, however I use my senseo coffee maker most of the time, in the morning strong tasting pads, to wake up better.
What recommendations do you have from Dutch cuisine?
- Stew, kale with sausage, dutch winterfood I like most, however I am not an kitchen-prince, I like Italian food the most, pasta, pizza, ect, but since my heart-attack 2 years ago I managed to live more healthy, it’s something to face. I like lots of different food, not much I don’t like to say. A nice dinner, tasty, I can enjoy that very much.
Dank u wel, Eric, your message to the readers of Sadistik Witchfukk webzine?
- Graag gedaan and good-luck with your webzine!! Your Dutch is great! To the GSBC readers of Sadistik Witchfukk i say, thanks for your support to the Blood Court..you RULE !!, and towards the GSBC-unknown readers I say…check the album out, we sentences you to…pure brutal Death Metal !! We hope to visit you all soon ! in the meantime..check our facebook-site :
facebook.com/grandsupremebloodcourt 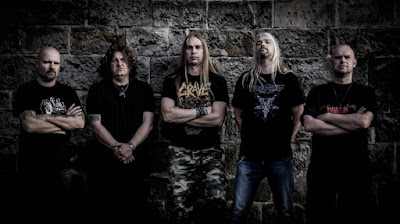