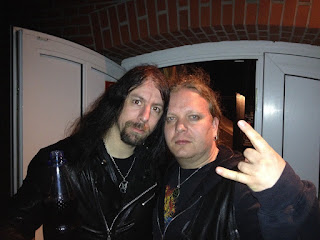 Hail Schmerz, you are very welcome to my small inferno Archangel’s Lantern. Introduce your awesome label Non Serviam Records in short please. (Tell us about the beginnings and about releases as well)

- Hello, thank you. I have started the label in 2008 I think. It started as an online store, and quite soon I felt the urge to release music of bands i like as well. So i’ve contacted some bands I know, who might be interested in doing release at my label. The band Grief of Emerald was interested in working with me, and so I had a record label with a first release.

When Grief of Emerald “The Devils Deep” was released, other bands started to send promo’s and quite quick we did more releases.

These days we have already released a lot of albums,  and since a few years we are working with Season of Mist for the distribution of all our releases in Europe and the norther part of America. Of course fans can buy also directly from our webshop. We have next to our own releases also a mailorder of other releases. (we ship Worldwide.)

I’m so thankful for the awesome Trident:’North’ digipack CD you sent me this year. I must say that it’s just a brilliant album and it was my favorite release of 2020. How did you meet Johan Norman and Trident?

- I’m happy you like it. I am also really happy with this album. Trident is a great band, and they create really good music. So I was honored when Johan asked me if I wanted to release the album.

Me and Johan are friends for a long time, we did some shows together with Trident and my band (Embraced by Darkness). Due to this friendship we were already working together for Trident, me helping with their social media pages and with some live shows. 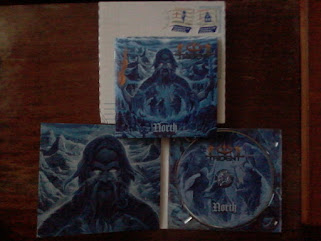 Johan Norman is One of my favorite Swedish guitarists long time ago. What are your preferred albums/tracks of his past bands, namely Satanized, Decameron, Dissection, Soulreaper and last but not least Trident?

- Yeah, Johan is a skilled musician and het knows how to write good music. One of my all time favorite albums he was involved in is “Dissection - Storm of the Light’s Bane” .

When you listen to Soulreaper, you can hear already the style of Trident. Actually, I have followed Johan his musical career from the early days.

The Swedish Black metal scene from the “90 of the Göteborg area were musicians that worked alongside each other and shared some band members.

Decameron “My Shadow...” is also a hidden gem. We are thinking of doing a re-release of this album.

One of my favorite songs of the Trident - North album is “Summoning”. 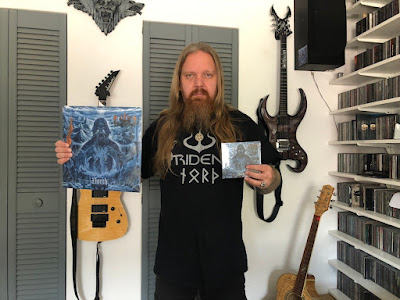 You are involved in two bands if I’m not mistaken: Winter of Sin since 2000 as a guitarist/vocalist and Steel Shock as a guitarist. Would you be so kind to talk about these bands?

- Well I am involved in more bands. In 1998 i started Winter of Sin, we released several albums, and after the last album “Violence Reigns Supreme” the band was put on ice. But since last week were have resurrected the band again. We are working on a new album, I hope we can visit Sweden to record the album at Armageddon Recording studio. This is the studio of Anders Backelin (Bassist Trident and ex-Lord Belial).

Around 2014 some (ex)members of Winter of Sin started a new band called Embraced By Darkness. (Melodic Black Metal) We have recorded a 4 track promo that we will send out to several labels.

Since 2020 I’m in a Heavy Metal band called Steel Shock. I started is the band as live guitarist, but now I am a full member. We are working on the 3rd album of the band. When all the songs are written for this new album we will enter the studio and then search for a label that want to release it.

Me and “Schrat” (the other guitarist of Winter of Sin/Embraced by Darkness) also have an Atmospheric Doom project called “Finsternis”. We both are huge fan of the Doom style, so back in 2008 we decided to start this project as well. We never recorded/released any of the songs...maybe we should do it hahaha. 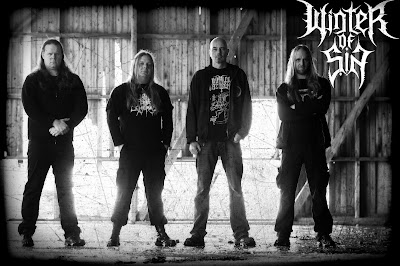 (Winter of Sin during the "Violence Reigns Supreme" photoshoot
with Henri and Michiel, of God Dethroned in the band.)
When and how did you enjoy underground? What was your very first live show you visited back in the day? Which releases (tapes/LPs) you bought at first?
- I think at the age of 12 I started to listen to metal music. And soon after I started my first band...I think it was called “Eternal Death” It was Death Metal with some melodic elements in it.
When we were young tape-trading was quite popular, when i got my allowance I started to buy stuff, like vinyls and cds. I also bought back then (end “80) my first guitar and amp. The first vinyl I bought was Death - Scream Bloody Gore, when i bough my new stereo-set with a CD play the first CD I bought was Death - Spiritual Healing.
Which guitarists and vocalists inspired you in the past? Do you have favorite ones nowadays?
In the beginning I was inspired by the first wave of Death Metal, bands such as Morbid Angel, Death, Massacre, Brutality etc....the Florida Death Metal wave so to say. (I was never inspired by bands such as Slayer, Metallica etc.)
Singers from that era I liked were: Dave Vincent, Scott Reigel, Chuck Schuldiner etc.
When early “90 the Scandinavian Black Metal wave came bands as Satyricon, Enslaved, Emperor, Lord Belial, Dissection and a lot more became a huge part of my life. The sound and songwriting were even more of my liking. And I still enjoy listening to those albums.
I am so happy I was in the middle of it, when the Death Metal wave, and later the Black Metal wave conquering  the Earth. (the best of 2 worlds) 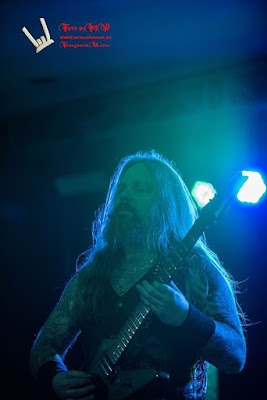 Enlighten us please about your past activity with bands as Gheestenland, Finsternis, Hagel, Krematorium IV and Windsmear.
- Gheestenland was a Black Metal band from my area where I played guitars. We released some albums and did quite some shows. I don’t think the band exists anymore. I left the band year ago.
Finsternis is as I said still active. I hope to do some releases with this project.
Hagal is a project of mine where I’m putting in ideas that are not suitable with the other bands. It’s not active, but also not dead...maybe I will release something of it, who knows hahaha.
Krematorium IV was an project of me and “Schrat” not sure if that’s alive anymore. “Schrat” had songs written...but it’s on ice so quite some time, so I think it’s dead.
Windsmear was a local bad with friends where I was playing on drums. I think the last time we were making music was 15 year ago. It was fun to do this, but since the bass player now lives in London I don’t think we will be rehearsing soon again hahaha. But when he wants to start playing again, I am ready. I have a rehearsal room at my house. 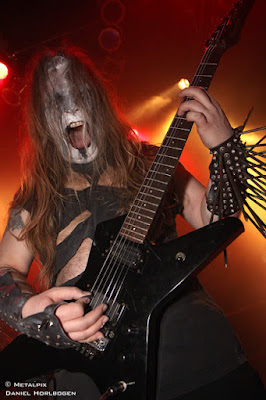 What is your opinion about Johan’s brother, Pontus’ Black metal horde CON?
- I like the music of CON, it’s a pity the band is unknown. Well maybe if they release a new album I could be of any help...who knows. If you listen to the music you can hear the influences of Johan in it.
Apart from the music do you have any special hobbies?
- Music consumes a lot of my time, the label and next to that the bands. But when I have spare time I like to hang out with friends and of course spending time with my family.
I sometimes play games on the PlayStation, but I have to admit I haven’t touched it in a while hahaha.
I also like to collect CDs and merchandise....of and guitars as well. The collection is quite big, but there is always space for more haha.
I’ve noticed that through your label was released Temple:’Structures of Chaos’ (what is a brilliant Death metal LP for me) and you made the cover design and layout. What are your favorite tracks of that excellent album?
- Yeah, I like to do stuff as that as well. I like to play with Photo-shop and try to create something nice (when needed of course)
My favorite track of that album is “Rituals of Marduk”...but the album has more great songs. But this is the first song that come in mind. 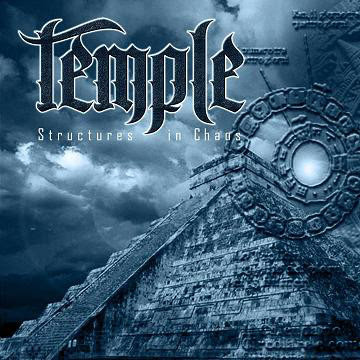 As far as I know you are from a very nice Dutch city Appingedam. What interesting places are your recommendations to visit me? What’s about local cuisine?
- That’s correct, Appingedam is a small city in the northern part of the Netherlands.
It’s a medieval city center with canals through it, and there are some houses with so called “hanging kitchens” it is an extension of the house that is located on the outside of the house above the water of the canals.
The local cuisine is not that special, but the city has it own beer called “Floem” .
Of course we have several restaurants and pubs. So if you like an old city that’s near the sea you should visit Appingedam. 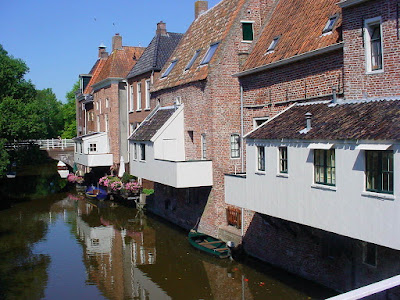 Dank je wel/thanks a lot Schmerz! Send your message to the readers in the end, please.
- Thank you for this interview!
A message to the metalheads out there:
Support the small/unknown bands as well...(every major band once started as local band).
Also support bands and labels by buying physical music and merchandise. This is the way we can keep the scene alive.
Important links:
facebook.com/nonserviamrecords
facebook.com/profile.php?id=100063590919547
facebook.com/shockwaveofsteel
facebook.com/Embraced-By-Darkness-596549793711355 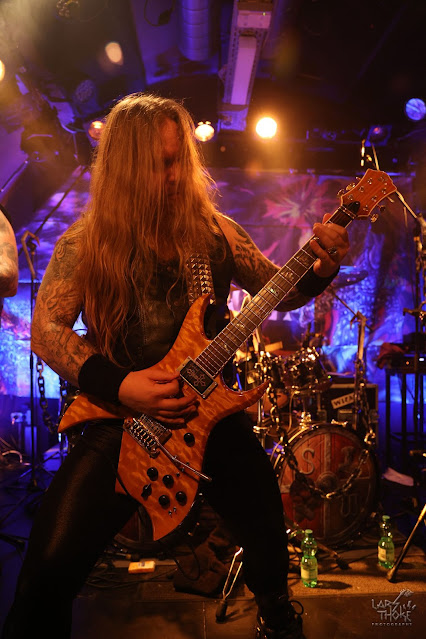