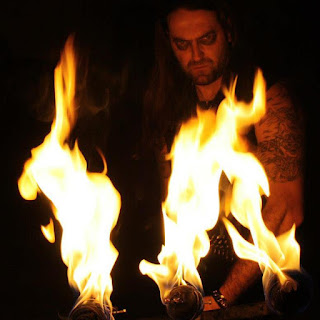 Hail Midgard welcome to Archangel’s Lantern. As far as we know OUIJA was born from the ashes of Levial in 1994. (Levial just released a demo: "Possession of a Divine Soul"). How do you remember the beginnings of OUIJA back in the day?

- The birth of OUIJA came after the dissolution of LEVIAL, our first band. And the history of the band is the following, but I will to try abbreviate this question a bit, because this of the biographies is sometimes the never-ending story and I understand that people get bored when reading it, the same thing happens to me ... we started our trajectory about the year 1995 or something like that I don't remember the exact date and more at that time when he was a somewhat crazy kid ... after a time of much rehearsals we recorded a demo, which at that time, had a very good acceptance that led us to record our first album "Unbridled transilvanian passion", which also worked very well ... then we had already prepared a second album but it never saw the light for different reasons that are not important now. In 2008 we reassembled the band, we recorded an EP "Adversary" and then our second album "Ave voluptatis carnis". Currently we have just released our new EP "Selenophile Impia" and we hope for the first or middle of next year to have our third album ready ... that's all until today ... as I have already told you we could eternalize giving more information but this would be a heaviness for the reader.

Paco: OUIJA released its debut album "Ridding into the Funeral Paths" in 1997 through Repulse Records. I remember that at that time, the radios played one of the most emblematic songs of the Cradle (Dusk); and at the same time, one of your songs from the aforementioned Ridding: "Unbriedled Transilvanian Passion". What do you remember about those times, when your debut album is considered, even today, as the great masterpiece of Spanish Black metal?

- Those years were really exciting, the Black Metal movement was consolidating around the world and Spain was no exception. Everything was very pure so to speak, many bands, record labels and zines were being born and the cooperation was maximum within the underground. At that time we with a lot of effort edited our first album, which took us to the top in what concerns a national level and positioned us very well outside our borders. In those years we were very young, we never take our music career seriously, if it has been so we would have achieved greater achievements.

In the end, the important thing is the memory that remains of that time in you and I feel fortunate to have lived through that time and to have been part of the most primal history of Black Metal in Spain. 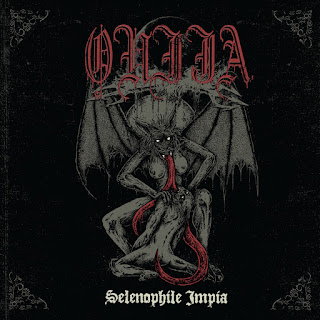 Paco: Unfortunately, this great musical entry did not fit within an overexploited genre, and OUIJA disappeared until returning in 2010 with the EP "Adversary". What can you say about all those 12-13 years that there was no news about OUIJA?

- For different personal reasons, the band was inactive those years, although Map our guitar never stopped composing privately for him. And I, as I imagine you will already know, I joined to SPELLCRAFT in those years. For the rest there is little more to talk about these years because nothing transcendent happened with reference to OUIJA.

Paco: In 2013 OUIJA unleashed "Ave Voluptatis Carnis"; the song "The Serpents Call Me" appeared in the Compilation "Spanish Inquisiton" along with other bands from our country such as the Andalusian Anvil Of Doom, Brutal Slaughter; the Basques Elbetreth, the “Manchegos” The Heretic; the Catalans Fuck Off, Vidres A La Sang or my Valencian countrymen Altar Of Sin; just to name a few; and of course, there is also a song: "Alone In The Eternity" from the album “Yersinia Pestis”, from your other project Spellcraft. What can you say about the composition and how this second album was created; and what did the experience of being with all those Spanish bands to make the compilation mean for you?

- Talking about our second album, to say that Map and I got back to join forces again, and in this new stage we also recruited members of SPELLCRAFT Murcilag on guitar, Fulgur on drums and our friend Hastur on bass. Map already had many songs composed and all together we have just outlined this stuff until its recording, the process I would say was simple, since we all knew each other for many years before and that always facilitates this task. I am not going to talk much more about this creation process because it was something very normal and without further incident.

And about the other question, OUIJA has been part of many compilations since our beginnings, that is something basic to make yourself known to more public and it is always an honor to be in them with other bands, both national and outside our territory. 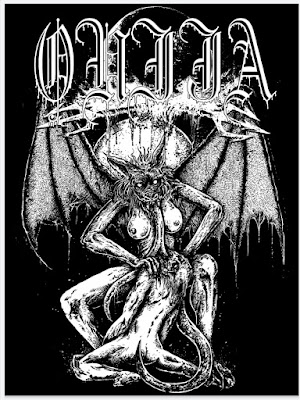 Paco: Midgard we had a chat recently about your latest EP "Selenophile Impia" and you sent me OUIJA’s latest video. What can you say about that EP of yours? Will there be a third album soon?

- Well, if I'm honest, the reception has been brutal, we really hoped that the new EP would be very well received by the media and our followers, since we took time to do everything, both music and the edition of the EP in great detail, so that it does not it was something simple and bland, since after a long lethargy without to release any work, it will not disappoint anyone by being a low-quality stuff. But it has far exceeded our expectations, since the interest shown by both sides, already mentioned before, is being amazing both in our country and abroad, putting of OUIJA back in its place again.

And of course, we are going to release a new album, we are already composing new songs for it. If everything goes well, we will try to release by the middle of next year.

Paco: I also told you I shared that video with an emphasis to the group of Leyendas Del Rock Festival. (As it is the only Spanish festival and their inception is support the national metal in almost all its genres. I asked for bands of our Black metal, like your band, and Empty from Zaragoza as well (I saw them live at the Hammer Fest in Valencia in 2014, together with Nocturnal Depression,  Cauldron, Aposento). Do you have any plans with OUIJA to attend such event someday? What is the situation to make a tour through Spain?

- At the moment, our future plan is to release our new album. Speaking about gigs, just say that so far we are only going to reappear at Bloodfest in Zaragoza. About more gigs and a tour starting next year we will already plan something.

Paco: How do you see the evolution of our Spanish underground (Black/Death metal through the years?

- In my opinion, in recent years bands with a high level have emerged in Spain, which has given us more respect outside of our country, the problem I see is that here many bands move according to the trend that marks the moment. Without having their own identity, what happens to it when that trend goes away, these bands fall into oblivion.

Also say there are bands here that have been faithful to their style for many years and doing a good work, for which these bands achieved good results. 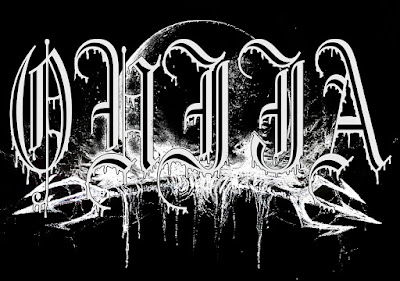 G.: What are your recommendations from Spanish scene (past and present)?

- I would recommend these bands from the past Between the Frost, Spellcraft and current ones I would cite for example Ered, Balmog, Estertor ...

G.: What is the current situation with Spellcraft?

- SPELLCRAFT  has been stopped for a couple of years, at the moment there are no future plans to return with it, but you never know, maybe later we will do something, but for now it is non-viable.

G.: Tobias of Swedish Voodus is an old friend of mine since 2009. What are your favourite releases/tracks of Voodus?

- I think that VOODUS are one of the best current bands in the world, with great potential and a huge future, sincerely I really like all their works. I hope soon to be able to listen to a full-length of them because it will surely be a bombshell.

G.: It’s a bit hard question I know but name us your eternal favourite releases.

- For me it is a very easy question, but I will not mention just one, if not two;

Dissection-Storm of the Light's Bane and  Emperor-Anthems to the Welkin at Dusk.

Both albums are unsurpassed and timeless, posthumous works, with this brief definition is enough.

G.: Beside the music do you have any special hobbies?

- I try to take care of myself so I do sports on a continuous basis, I adore good gastronomy and good wine ... these three things after music would be my hobbies so to call them.

Muchas gracias/thanks a lot Midgard, our best wishes to OUIJA! Send the message to the readers in the end.

- Firstly, I would like to thank you for your interest and support to OUIJA, it has been an honor for me to answer your interview to propagate the name the name of OUIJA in Archangel’s Lantern.

To end the interview, say that we are under a new change in the world order and humanity with each passing day is more stupid, cowardly and submissive. They are not hanging a yoke around our neck so that we live as androids, totally subject to them, those fucking vermin hidden under the great elitist spheres which want to enslave us, turning us into puppets of the system, manipulated and controlled by their dirty hands. Black Metal has always been a music that has fought against all this, breaking everything established, such as its damned and infamous doctrines, take off the blindfold and start to see the shit with which they want to feed and poison us, start to think for yourself and not that they think for you and want to mark your path. It is better to be a hungry and free wolf ... than a fed and subdued lamb. Hails from Spain!!! 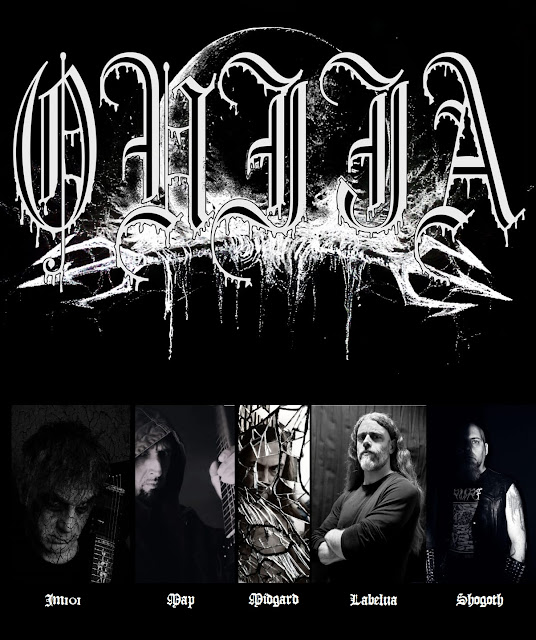