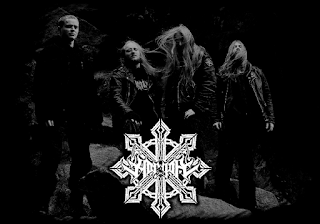 Ave! Please, tell me something about the beginning, what does MORGON stand for and how did the name come to your mind?

Haglaz: Ave Georgius! MORGON started as a two man project in the winter months of 2007. Me and Nordah were influenced by Black/Death Metal bands like DISSECTION, GATES OF IHSTAR and so on... We started to create songs already, but we needed a drummer & bassist to complete the whole thing and in 2008 everything turns fine as Grym (drums) and Urisaz (bass) joined the band. MORGON is a fictional name, but it stands for a black burning flame that everyone of MORGON bears inside.

In your letters you wrote that your debut album "Infinitas" will be released in January, 2010. Tell me please about your work on it and is there any concept behind "Infinitas"?

H: We started to write the material for "Infinitas" in the middle of 2009. It will contain 6 songs of blackened death metal and an acoustic track. There isn't a real concept for "Infinitas", but the songs are connected in another way, basically the songs are about the eternal realm of death, the gates of eternity. We hope to release it at the beginning of 2010 when nothing cross its way...

Germany is famous for great Death/Thrash/Black metal bands. You are from Sachsen-Anhalt. Could you please tell me about the local metal scene?

Grym: I think we have no real "metal scene" here, but there are some cool bands from this area like HIDDEN IN THE FOG (which unfortunately split-up), TRIMONIUM and INTO OBSCURITY. For sure there are also a couple of Pagan/Black Metal bands, but I personally find that none of them can convince.

H: We have a small "scene" around our bands from this region, but it's very underground. Bring back the 80ies!!!

I would like to know something about your live-shows, what bands did you play with and were there any exciting things during or after gigs?

H: We played just one show this year, but it was very special and a great audience. The feedback was very good and we'll go on in 2010! You can watch a video from this show at our MySpace site (myspace.com/morgon666). After the show we have some beer and talk to our fans... 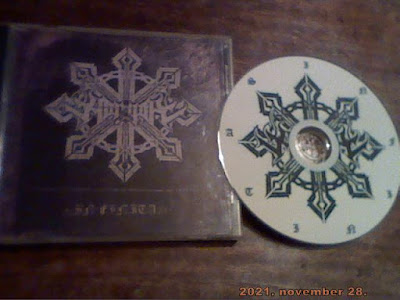 Besides playing in MORGON what do you do, what are you interested in?

G: I am a moviemaniac, I collect and watch many movies. But I also like to draw some artworks or wander through the woods.

H: I also play in a Melodic Death Metal band called INTO OBSCURITY and some other music projects.

What are your 5 favourite albums?

G: DISSECTION – "Storm Of The Light's Bane", EMPEROR – "Anthems To The Welkin At Dusk", BATHORY – "Under The Sign Of The Black Mark", GATES OF ISHTAR – "The Dawn Of Flames", MAYHEM – "De Mysteriis Dom Sathanas".

What Ukrainian and Hungarian metal bands you know?

I'm very sorry that in 2006 Jon Nödtveidt committed suicide, however, I respect his decision. What is your opinion about Jon as a person and musician?

G: I did not meet Jon personally or saw DISSECTION live, but for me he was one of the most important musicians for the whole Death/Black Metal scene. I read much about him and his death, and I think his "work" was done. He personally accented that "everything was said" with DISSECTION as his speaking tube. His achievement is immortal.

H: Jon was definitely a genius musician! His music was full of atmosphere and dark spirit... just a few people have a level to create music like him. I saw DISSECTION live in 2005 and it was a great pleasure to see them live before he committed suicide. He has my deepest respect. Rest in Chaos Jon!

Personally, I found new GORGOROTH album one of the best releases of 2009, besides Tomas Asklund, formerly DISSECTION's drummer, took part in "Quantos Possunt Ad Satanitatem Trahunt". What do you think of the album itself?

G: Yeah, definitely one of the best releases in 2009. It is a good mix between aggression and melody, the riffs are catchy and the scornful voice of Pest is fucking great!

H: It seems that GORGOROTH is born again... in a positive way! Killer album and truly one of the best releases in 2009!

What are your plans for the future? I hope one day we'll play together!

G: We really hope so, that would be cool!

H: We rehearse new songs and prepare for the recording of "Infinitas" and, of course, we hope to play some shows in 2010! That would be great to play with your band and I hope it will happen soon...

Danke Sehr! As a conclusion, would you like to say something to the readers of Encomium?
H: Hail to all the Metalheads and check out our new CD! Keep the flame burning!
G: Stay Metal and Hail Chaos! 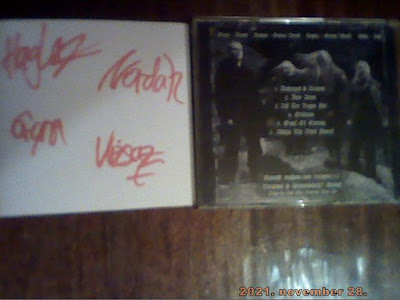