Interview with Sascha Knust of Obscenity 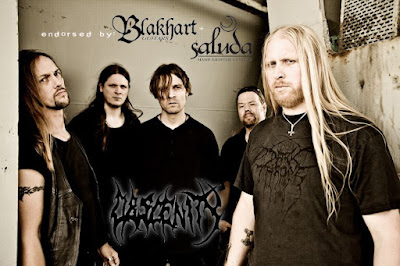 Obscenity, from left to right: Sascha Knust(drums), Christoph Weerts(guitar), Jörg Pirch(bass), Hendrik Bruns(guitar), Jeff Rudes(vocals)
Hail Sascha! Welcome to the zine. Because this is the first interview with you, tell us about all the bands you've played in!
- Hi. I started with Obscenity in 1989, and after I've left the the Band in 2000, I played in the band called "The Now Noise" as a session drummer. Later I played in two bands: the first one is called "The Awakening" and the other called "Sethnefer"! The Awakening was another session project, but Sethnefer is the band I played in from 2001 to 2009. In 2011 I returned to Obscenity and I will never leave again!!!!
How did you get interested in rock/metal music, and what were your influences back in 1989?
- The big brother of a friend was a metalhead back in 1982, and he taped me all that cool old-school metal stuff like Accept, Kiss, Maiden, Metallica...etc. Later when the metal got harder, my top bands at that time were Slayer, Kreator, Testament, Exodus !!!
The biggest influence was the record "Beneath the Remains" from Sepultura....still love it.
Obscenity started in 1989. Were there another names for the band back then?
- Yes, we had names like Triangle and Artificial Intelligence in the Mid 80's. But we changed the name in Obscenity when we got the date for studio to record our first demo that was later called "Age of Brutality". I came up with the idea and draw the first logo. 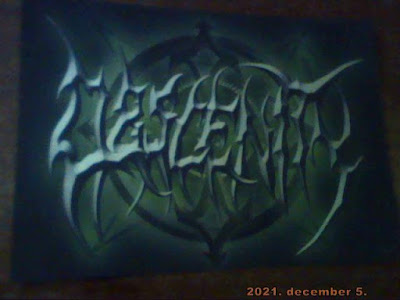 (my Obscenity-sticker, what sent me Henne of Obscenity in 2012-G)
You played old-school Death metal on every release. What do you think of melo-death bands or tech-death bands who tried to go mainstream?
- I like bands like Monstrosity or Malevolent Creation for example, with a great combination of everything! We don`t care about mainstream and stuff like that, because the music we play is far away from mainstream and I don`t give a fuck about metalcore or this frognoise death metal so many bands play.
For us one of best Death metal releases of 2012 is your album, "Atrophied in Anguish". How was its reception in the metal press?
- Thanx a lot! It looks like the press loves our release!!! All the zines wrote good things about the recording and gave fantastic notes!!! It`s a good feeling, because we worked hard on it to make a recording that really kicks ass! 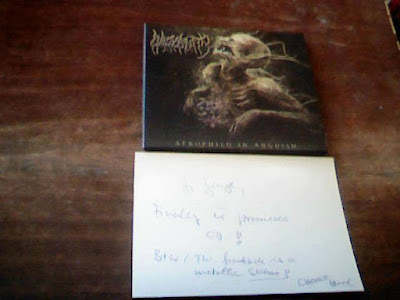 (my Obscenity CD '"Atrophied in Anguish" and a kind dedication from Henne/Hendrik Bruns)
We checked out on YouTube some videos about Your shows last year. Would you be so kind to tell us about live-activity?
- We played some great shows last Year and we will do the Same this Year!! On may 25 we kill the Extremefest & on July 27 we'll play Stonehenge Festival in the Netherlands.
But these are only the bigger shows. We have a lot single gigs within Germany also.
But we´re in song-writing mode at this time and you all know both activities are very hard to handle at the same time.
You were signed to the German label Apostasy Records. Share with us please some informations about this label.
- The label is a very new one, existing sice a one year. Tomasz, the owner, is a well known booker in his past years and we played a few shows for him. He came up one day and asked about interest in his new label. At this time we had the demo recordings for “Atrophied” and send them to a couple of labels around. Some of them were very interested but our decision was Apostasy because our homebase is quite near to the labelbase. 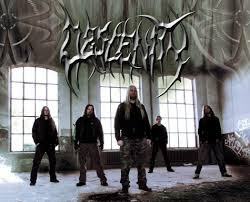 You made an excellent old-school clip to the track "From Heroic to Depraved". Enlight us please about clip-making process.
- A good friend of us is a photographer and camera operator, and he filmed us in our headquarter during Our rehearsals! He thought it was funny to make a Video from this shoot and I think he made a good Job! We will do a video with him again!!!
What other German metal bands can you recommend us?
- Wow, there are so many great bands in Germany like Blackshore !!!
We have played a few shows with the guys. These guys rocks. Black metal mixed with rock! But of course, we recommend all of our label-mates from Apostasy. Hey, and not to forget Tombthroat. We had a show with them a couple of months ago and had to talked with the guys.Cool ones! Especially Björn Köppler (also known as "Mladie"), he is very involved in the metal scene.
Your 10 all-time favourite albums are?
1.Kiss - Creatures of the Night
2.Motörhead - Overkill
3.Sepultura - Beneath the Remains
4.Monstrosity - In Dark Purity
5.Malevolent Creation - In Cold Blood
6.Judas Priest - Unleashed in the East
7.Terrorizer - World Downfall
8.Deicide - Legion
9.Testament - Demonic
10.Carcass - Heartwork
What bands from Hungary, Ukraine and Romania do you know?
- Hmmm... this is a very unknown scene here in Germany. And I am very sad to say this. But most of the bands we know here are from US , Sweden and Germany. But hey. One name I will remember is Castrum! I think they are from Ukraine, isn´t it? 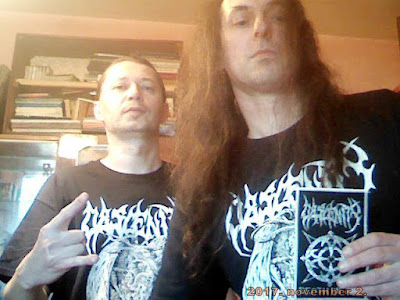 (Cornelius of Castrum and me, supporting Obscenity, 2.XI.2017)
Could you please recommend to the readers some German food and drinks?(especially from Your region)
- Grünkohl mit Kassler und Pinkel This is kinda cooked green cabbage served with a special sausage. This is very well known in this region.
Do you have any special hobbies?
- The music is my hobby, because we are all hard working guys in our band, so I spend my free days with playing Drums !!! The other guys have hobbies like going fishing or martial arts. But the same hobby we have is doing metal!
Share the readers your plans for this year (new tracks, festivals, or a DVD).
- Henne & Chris are working on songs for a new CD, and in the near future there will be a new video.
Danke schön, Sascha! Your message to old-school Death metallers….
- Thank you guys for having some time on us and stay Obscene!!! 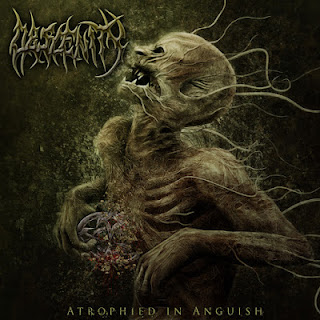