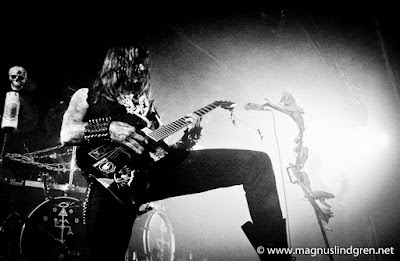 Hail Tobbe! Because this is the first interview with you, please give us a short bio regarding your band.

- Hail! Well, we are JORMUNDGAND from Sweden. We have been lurking in the underground since 2004. The first demo "Satanic Attack" was recorded between 2008/2009, and at that time Hellbutcher from the mighty NIFELHEIM helped us a lot! He was with us in the studio and he even put some vocals to the song "Satanic Attack". He painted the cover for the demo and t-shirts, took all our promo pictures with his camera and more. In 2010 we recorded our single "The Eleven Path". I (Tobbe F) started my own record label "Burning Eye Productions" and the plan was to release the single on a 7" vinyl through Burning... But the dream hasn´t been transformed to reality yet because of different reasons.... In 2012 we decided to record our first full length-album. It is now finally finished and ready to be unleashed upon the surface of the world, to spread the poison of the mighty Black Dragon of the abysmal ocean of Chaos!

How  did you get introduced into metal, and did you played in any bands before Jormundgand?

- It came quite natural to me, I guess. I was around 6 or 7 years old and I heard Guns'n'Roses on the radio! It was "Paradise City" and I felt like totally blown away by the music! Then on the very same radio show they played "Poison" with Alice Cooper, and then I was trapped forever! Very soon after that I started to listen to more hard music like Metallica and Iron Maiden. When I was at the age of 14 I started my first band. We named it "Confused" and we played some kind of Swedish straight edge hardcore! Haha, the music really sucked! hahaha! We played live one time and split-up shortly after that! When I was around 16 years old, I came in contact with Black Metal for the first time... And I can still remember the feeling of coming home, that I have finally found my musical way in life! 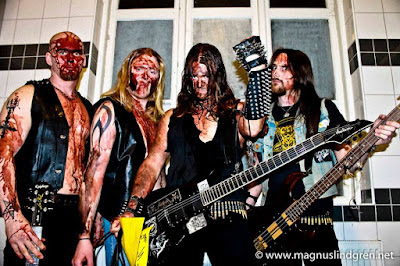 You are working on your first LP. Can you tell us all about it? (stuff such as recording process and so on). Did you signed with a label to promote it, or it is self-released?

- Yeah, this will be our first full length album! The thing is that it´s only two "new" songs on that recording! Those are "Malice Striker" and " Beyond the Bound". The rest of the songs were written between 2010 and 2012. I felt that we had too much un-recorded material to move on forward with the other new songs that will be on our next release. We have taped all our earlier material on a tape recorder. And everything has been recorded live in the studio. But this time we did a lot more time in the studio. We recorded all  the instruments in separated steps, beginning with the drums, then bass, then guitar...... It was more time-consuming than I could ever imagine! And money-eating! That's why it took us more than one year to record the album! All my money has been pumped in this record, so I can´t release it by my own label, through "Burning Eye Productions". Not just because of the money, but because of all the time it took away from the music and creation of music. To make Black metal you need a very strong connection with your inner self. If you don't find that state of mind, then you will loose all the true spirit of your creation, especially now when we play live as well.
Are there any guests on the album? ( Hellbutcher or other ones?)
- I had plans to invite Hellbutcher to the studio again, and to ask Oscar from RAM to put some heavy metal song to one of the tracks, but, it never felt like the right thing to do! So, no guests on this album!
You shared the stage with Necrocurse on 5th of April in Gothenburg. How was your concert?
- Ah! It was fucking great! We feel more hunger now than ever before! We did a gig in Trollhättan 4 weeks after the Gothenburg gig, and it was fucking awesome as well! Hail Satan! 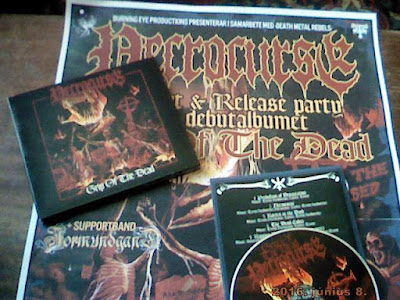 (my awesome Swedish friend sent me Necrocurse-poster and dedicated by Hellbutcher digipack CD in 2016 -GF)
What is the situation regarding your new shows? have you decided to tour Europe, or it will be just in Sweden (or Scandinavia)?
- We will play as much as we can. I feel that we have a great potential to be a killer band on stage!
How are the things going with Burning Eye Productions?
- Well, I am a little bit unsure about the future of Burning Eye Productions, at least with the Jormundgand thing. But I will have the label active in one or another way. Maybe releasing other bands' material and organizing concerts and tours. Time will tell!
What is JORMUNDGAND's current line-up and if the members of the band take part in other projects?
- It's me Tobias Fongelius on bestial vomit and guitar! And Ingo on drums. Erik K on guitar. He is active in a few other bands as well, like Vornth, Autokrat and Xul. Tobbe P has been involved in everything we have done so far, all the recordings and our two first live shows, but not anymore. He wants to give his main band "RAM" all his focus, I believe. So it's a fucking shit situation right now to be honest. But I understand and respect his decision. All hails to the mighty masters of "Heavy Metal Tyranny" - RAM!
Your top 10 all-time favourite albums are?
- Shit! Haha, what a question! Ok.... Starting from 1.
Storm of the Light´s Bane
The Somberlain
Reinkaos
Servants of Darkness
Lawless Darkness
Blood Fire Death
Altars of Madness
De Mysteriis Dom Sathanas
Morbid Visions
Again Shall Be
Well, I will probably change my mind tomorrow, but what the fuck: all this albums are fucking killer!
Do you know any bands from Hungary, Ukraine, Romania and Moldova?
- It's funny that you're asking me that, because when I was down to "Halmstad" in Sweden last month to bang my head to Nifelheim, Vulcano and The Stone, it was something unexpected that happened on the stage! As you maybe know, Tamás from the Hungarian band Tormentor is now a member in Nifelheim. And in the middle of the show, Hellbutcher went off from the stage and Attila Csihar came up instead and they started to play the intro to the "Anno Domini" record, and then they played "Tormentor" with Attila on vox! That was fucking legendary! But besides Tormentor, Domhring, Castrum and Chamos my knowledge about your bands is very thin I'm afraid.
What bands can you recommend us from Sweden (and also from the rest of the world)?
- Well, Vornth (Swedish speed metal), Xul (Swedish black metal), Necrocurse (Swedish Death Metal), Mordant (Swedish Black Metal), Trial (Swedish Heavy Metal), In Solitude ( Swedish Heavy Metal). And of course, RAM (Swedish Heavy Metal).
Now regarding your local cuisine: what foods, drinks, cigars, tobaccoes can you recommend?
- Hmm, Sweden is very famous for our great KebabPizza! So if you come to Sweden, just order Kebab! We have something called "Systembolaget" in Sweden. And that's the only store where you can buy your alcohol. It's forbidden to sell alcohol in food-shops etc. Quite shitty if you ask me, but it have one big +. Every "Systembolaget" store have like 100 different beers, and maybe 100 different whiskeys and like 1000 different wines! So we have a lot of different brands to pick from! Personally i like scotch whiskey and Irish dark stoutbeer!
I was very pleased to find out that Jon Nödtveidt (Rest and Reign in Chaos) is your hero as well as mine. From your letters I've got to know that you didn't know Jon personally, but what do you think of Him as a person and musician?
- Because I have a lot of friends that knew Jon personally, I know that he was a great person and musician! He was like a never ending source of musical energy and inspiration and the guitar riffs just sprayed out of his fingers into his guitar! He is, and will always remain, my greatest inspiration both musically and spiritually! Hail the Bloodline of fire! Hail Jon Nödtveidt! Might His legacy never be forgotten.
Tack så mycket, my old friend Tobbe! Hail to the Northern Dragon of Chaos!
Your message to readers of Sadistik Witchfukk...
- Varsågod min vän! I hope to meet you in the mighty Carpathians soon! Hail Satan! 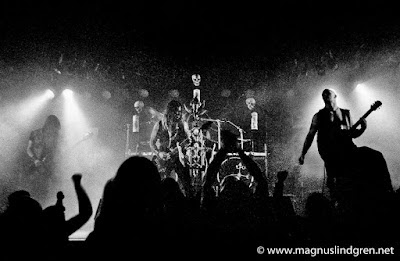