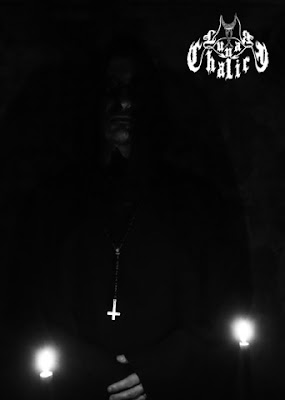 Hail brother E.I.-M! Youʼve started with a new project this year. Lunar Chalice sounds for me very occult, tell the readers first of all about the beginnings and the horde name. Who created the logotheme?
- Hails Georgius. Lunar Chalice was founded shortly after N. joined Sacrilegious Rite. Heʼs already recruited M. and asked me to join also. So we started to work seriously and hard using the concept of historic heresy for our brand. Weʼre on the same page when it comes about the image of true Black Metal or how we see it and what it is for us. Black Metal must be black, ugly and must be the essence of all evil. The breaking of taboos and the journey into they abyss of the soul.
The name Lunar Chalice can be seen metamorphic because itʼs the essence of the night from which we drink, from which we take our intellectual potential. Itʼs the ultimate force!
The logo has been created by Marcus Ludwig who also created the Sacrilegious Rite Logo. A great artist and longtime friend. 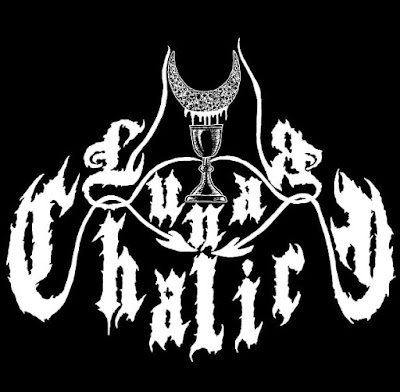 What should we know about the line-up? Who is the main songwriter? How could you define your style? Which bands are the main influences of Lunar Chalice?
- N. is the main composer in Lunar Chalice. He has written all the structures and made the arrangements. A great musician with the right hand for dark and obscure music. N. and M. are the main instrumentalists in Lunar Chalice who take care about the musical obscurity. My part is the lyrical and conceptional lead.
I think our style is old 90s Black Metal. There is nothing modern or progressive in it and thatʼs exactly the way we want it to be.
N. is influenced by old the very first releases of Emperor, Mayhem, The Black and the first Gehenna album. I am into all kinds of Black and Death metal but when it come to Black Metal in particular Iʼm very very picky! Itʼd mention old Samael, Tulus, Malignant Eternal, old Satyricon, Darkthrone, Mayhem and Mare when it comes tonowadays Black Metal.
M.ʼs influences are Darkthrone, Burzum, Emperor, Dissection and Gehenna. Just to name a few.
Letʼs say, we are into old Black Metal mostly.

Enlighten us about lyrics or lyrical conception of Lunar Chalice and tell more about the cover art.
- Thatʼs an interesting topic, even for us. Lunar Chalice is mainly about historical events regarding European heresy and what has been delivered from the Medieval heretic cults. Itʼs about ancient Witchcraft and Satanism. Opposition towards christian doctrines at a time when Christianity was the one and only instance for the whole life of the individual. But Lunar Chalice is mainly not about blasphemy towards Christ but of celebrating the old masses and devotion of the cults who acted in the greatest danger of being discovered by the inquisition.
The cover art shows the classical image of Walpurgis rites who were thought to take place at the German Brocken.
Itʼs a rocky landscape in the north of Germany. It underlines our concept so we used that art for the Walpurgis Dance demo. 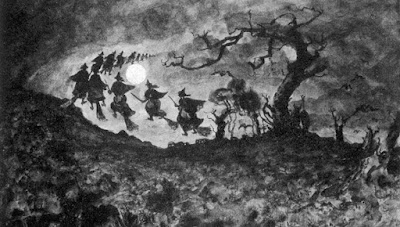 You unleashed a demo tape “Walpurgis Dance” including 2 awesome raw Black metal tracks, called Night Eternal and Walpurgis Dance through German Worship Tapes records in August and I must to say, I like a lot this trve sound of Lunar Chalice, what catches me back to good old early 90s. What are your plans for the future after this demo?
- Thank you for your kind words. Walpurgis Dance had a great impact and the reactions so far have been pretty positive for us. There are already two more EPs in the making before we want to work on a full length!
This year we release another EP with the title “Night Poetry”. "Walpurgis Dance" is only a small demonstration of whatʼs to come and scratches only at the surface of Lunar Chaliceʼs true potential. Letʼs say that we want to release black metal which we prefer and expect it to be. Black Metal we wish for and would like to listen to by ourselves. Since we are all not in this business shortly and also not being the youngest anymore, we bring our longtime experiences together to get the best result.

Iʼve noticed that Lunar Chalice-members are involved in different German bands like Sacrilegious Rite (Hail brother!), Malefica, Nightwalker and Todesweihe. Would you be so kind to share some importantinformation about these hordes?
- Yes, thatʼs true. I think the only right information about that bands I can grant you is that all are waiting to release new outputs. Everything is ready.

Do you think to do some live rituals in the near future?
- It would be possible but we agreed that we donʼt want to play live. Theres music you better enjoy in your own 4 walls and which does not fit to be performed in front of a bunch of drunk headbangers. I think Lunar Chalice is one of them. We all do!

Heresy, Witchcraft and Satanism are the main themes under the banner of the Lunar Chalice.
Describe please your own point of view about these terms.
- I think that there is truth beyond the truth you have to buy from authorities. I think that only a few of us are truly free. The state controls your life, religious authorities control your life. But nevertheless the three mentioned themes can be seen as some kind of rebellion. But I donʼt like the word rebellion in most topics because itʼs getting used for defining teenagers getting vegan or revolting against their parents. Rebellion is the opposition of all what defines the fitting in citizen. Religious, mental and existential.
Itʼs important when it comes to Satanism that you donʼt only write songs about it but to use it, to make it your own, to be it! Satanism and occultism especially are words which you canʼt take serious anymore today. Itʼs a sell out. In the age of social media the word occult lost much of its meaning. A young girl, who likes to listen to Satanic and occult bands smears blood on her face, takes a selfie and claims being “occult”. What the fuck is that supposed to mean? By what right? You see.... ? Itʼs a sell out circus which started to take over after the death of Jon Nödtveidt.
Satanism and the gnostic within is the rejection of earthly and mundane weaknesses, the rejection of collective habits when you have to define it in the three dimensional realm which we are used to! But itʼs just more on the metamorphic plane towards the astral realm. It this requires initiation and itʼs just more than just to read some books. Preaching the word of Satan without devotion or believe is false and fake. There are too many individuals out there claiming to be “occultists and satanists”. I donʼt take that serious in the first place.
Too many self declared “satanists” use that word just to hide their weakness and mental issues. They justify their personality disorder with that word. On the other hand they hold interest in mundane things like watching TV, being into football, into a club or being about driving an expensive car. Thatʼs sick, false and weak!

Which occult and dark places could you recommend to visit for us in Germany?
- In Germany there are many old places which got a dark and tragic history. Not only influenced by heretic actions but also by medieval superstition. Wrongly accused individuals who had nothing to do with heresy, witchcraft ect but nevertheless died through inquisitorial tribunals. Trier is one place which a dark medieval background, thousands of women of had been accused of Witchcraft.
When it comes to true heresy there are also some caves where the cathars use to hide or where excommunicated Templar knights hide their secret. But thatʼs not in Germany in particular but spread all over Europe.
When you dig deeper in history you can find some pacts made with the devil for oneʼs own benefit. But thatʼs some rare and individual cases. In my area we the devils keep where a landlord made a devilish pact to win a battle, so the legend tells.

What kind of literature is your recommendation about German Witchcraft and Heresy?
- There are many under the topic “witches and witchcraft”. Due to inquisitorial tribunals about heresy had been a wide spread phenomena, one can find individual cases in archives. Most bigger towns had their tribunals.

How do you see the underground German Black metal movement nowadays?
- To be serious, the main problem today is the availability of just too many bands. The market is full and as a cause of that, true potential is rarely discovered. Letʼs say that most bands take each otherʼs oxygen to breathe.
Sadly you have more less potent bands than well potent. But I think this problem is also of a global nature. Itʼs rare that you meet “fans only”. Everyone thinks itʼs a duty to play in a band. Thatʼs the problem. But when it comes to scene related questions, I am particularly old fashioned. Maybe Iʼm not the right person to answer it.

Vielen dank brother! Send a message from Lunar Chalice to readers of Archangelʼs Lantern at the end.
- Thanks a lot for the great questions, brother. I guess I also speak in the name of all Lunar Chalice members when I thank the audience for support and the great attention we got already by only releasing a demo tape. The potential is there and we will use it, so you can expect two EPs to come which we want you to watch out for. The next one will be called “Night Poetry” and the one after that “Medieval Cults of Heresy”. All material is written and is just waiting to be recorded. 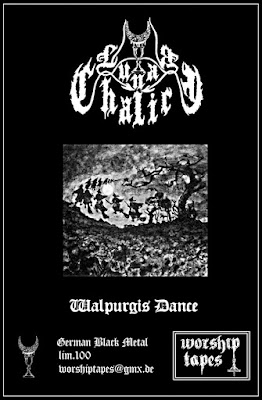