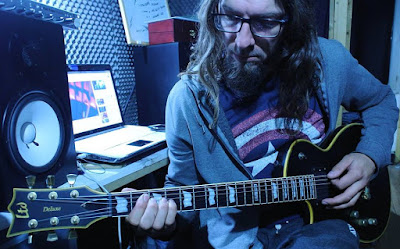 Hail Julien, hope all ok with you. How and when did you get introduce to metal underground?  Since when did you engaged in using Tyr name? Are you into Scandinavian mythology?
- Hi, I am feeling really well! I get introduced to the metal scene in the beginning of the years 2000, first auto release with a band called Withdrawn.
We started doing shows with this band, then a few years later I joined Otargos forces and I had to find a name for the stage.I started using Thyr as a stage name. It was inspired by an old language meaning "the Rock" which at the time was feeting my mentality perfectly!
I am not that much into Scandinavian mythology but it could an interesting subject to read about in the future for lyrics.

When did you start to play the musical instruments? Which musicians influenced you in the beginnings? What was your very first band?
- Way before playing drums I started playing guitar so perhaps 15-16 years old.
In the beginning I was really influenced by Chuck Schuldiner, Slayer riffing, and the entire Thrash/Death scene.
Before Withdrawn we had a band called Dawn Chaos but never released any material, the first years rehearsing summer/winter into a non isolated garage ahahah!

You played in 3 bands if I’m not mistaken with your brother together, namely in Withdrawn (melodic death-black), Fall of Seraphs (Death metal) and Siberian XP. Tell us more about these hordes.
- We played together in Withdrawn, recorded demos and 2 albums and a split, that was our first real band, playing live and first couple of tours! We had a lot of fun during those years where everything was easier to play live.
I actually never played in FOS but my brother played bass with them, he just stopped recently, such a great old school death metal band with great influences and talented musicians!
I played during a few years in Siberian XP filling the drums due to the original drummer health problems...
I recorded an EP with them and did a few shows but with personal life, growing activity with Iron Flesh, I choose to leave cause I had no enough time to stay focused on this project.
But that was a good band experience and I progressed a lot on how to make your drum kit sound great without trigger. 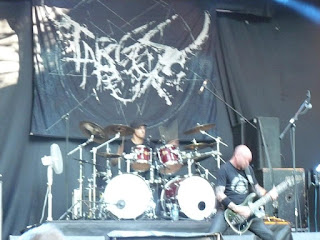 You played the drums in several bands called Annthennath, Malevolentia, Otargos and last but not least Dawn Chaos you were as a guitarist. What should we know about these hordes?
- Dawn Chaos was my first band ever where I played guitar, too bad we never released any material, perhaps I still have a few guitar tabs.
Annthennath was a huge studio experience, I recorded demos, albums and split cds/vinyls/tape.
Great black metal band, really productive and talented guys, but then I joined Otargos and had not enough time for this project.
It was probably one of the biggest bands I played with.
Recorded 2 albums did a lot of shows around the world, many tours!
I learned so many things with the guys and the touring experience! Some of my best "souvenirs".
With Malevolentia I recorded one album and did a few shows live.
The main composer is a friend of mine and it was a great pleasure to do it for him, hope to work again with him one day. 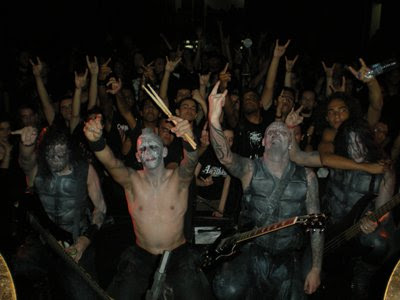 
When and how met with French legendary guys of Agressor? Along the years 2015-2016 you are playing with guys again. Share all the important information about this awesome alliance.
- If I remember well I played my first show with them in 2015.
Kévin Paradis give me a call and asked me if i could fill in because he was not available for the gig.
I had to learn 15 songs, no rehearsal and we played as headliner in front of a packed room. First time meeting and playing with the guys ahahah
Pretty crazy but I did no structure mistake and the show was great, something impossible to explain.
Then along the years I played a few shows with them like in Romania for a festival, France and Belgium.
They are great guys, awesome musicians, and really easy going people. Such an honor to play with those guys when you know 10 years ago I discovered their music. Never thought I would play with them a few years later! 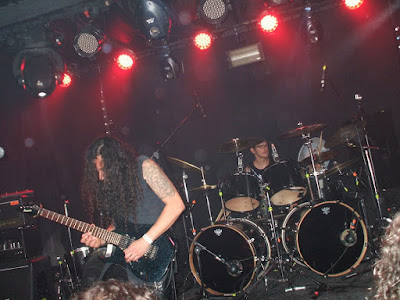 (In Romania with Agressor)

Mithras, Monument of Misanthropy and Seth are the bands where you played also as a drummer. Let’s talk about that era of your life. 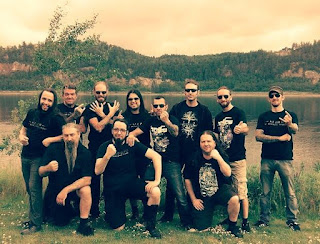 - I did a few shows and a tour with MOM, such intense fast and raw brutal death metal! I had to fill in the shows of Romain Goulon stuff. It was not easy but I nailed it and did my best. It was just session and as they are a touring band it was hard for me to be available all the time, but great memories especially on the tour with Suffocation/Abiotic/Cattle Decapitation.
I did a Canadian tour with SETH, Alsvid was not available so I had to learn all the stuff. Great experience, good shows, and touring Canada in summer is just so beautiful, what a country with amazing people! (Thanks again Martin if you read those words).
Mithras was probably my most intense experience drumming wise. I pushed myself far beyond my limits/comfort zone. Leon is an absolute genius, songs are so good but really hard to play at the same time. He was my best "boss" regarding organization/dedication but also one of the most demanding one drumming wise. We did a tour in the UK and played Brutal Assault, again an amazing human/drumming experience.

Iron Flesh is an amazing French Death horde; enlighten us all the details from the beginnings to your new album, “Forged Faith Bleeding” (excellent album!!)
- Iron Flesh is a based on a solo project I started in my apartment..After all those years playing sessions I had this strange feeling.
I wanted to play my music, stop using triggers, going back to some more rock 'n' roll attitude, simplicity, groove so I composed the first EP "worship the Necrogod". Some friends listened to it and told me to find a line up and try to play live!
It was easy to find friends (Sylver, Seb and Guilhem joined me) as the music is easier to play, more fun, don' t really need to work on your technique, to warm up. It more a plug and play band, and it feels so good to enjoy again playing live and not being stressed by backline issues, lack of warm up...
One year later I released "Scourge of demonic incantation" which was a little more melodic than the first EP. In 2019 we released "Forged Faith Bleeding" and a special song for a French compilation WAFFY2. So we are pretty active, more than 30 shows in a few years. 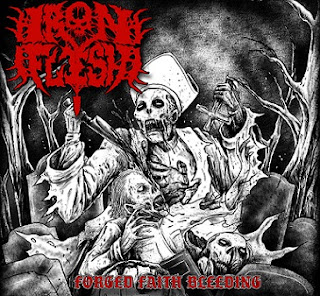 What is a current situation with your other bands, like Diskarial, Horncrowned?
- I recorded an EP with Horncrowned I hope he will contact me again to record some more stuff because I really enjoyed this raw black metal!
Diskarial is my first solo project, I recorded a demo and released an album.
I have another album fully recorded instrumentally but no lyrics on it if I have enough time perhaps I will finish it and release it because it was really different from the first release, wait and see.

Describe me French scene nowadays. What bands are your favourites from golden era of 90s? I’m a big fan of French Massacra (R.I.P. Fred “Death Duval”) and I got a very kind letter from Jean-Marc Tristani in 1993including their signatures… Do you have any favourite tracks and/or albums from their heritage?
- I like those bands from this era Loudblast, Agressor,  Massacra but I am more into Scandinavian hm2 bands.
'Bloodshed' from Agressor,  'Neverending Destiny' from Agressor.
Then albums from this era are so good it's hard to name just a song.
But be sure than before 2000 if you are fan of old school music you will enjoy those French Death/Thrash pioneers!

Just make a mixture of the artists that compose those bands and you got my favorite ones..

Have you any special hobbies alongside the music?
- Yeah, I like reading SF books, Lovecraft, going to the gym, meeting with old friends, walking in the forest. 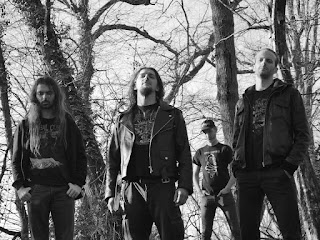 France is a very nice country with ancient history, famous by the painters, writers, sculptors, actors and the French kitchen is world-famous. I have never been in France yet but hope I will have a trip very soon. Tell of some thoughts about your beautiful country.
- Great regions, landscape, forest, cattle, friendly people in the country sides, drunken people, assholes, pubs, like in every country of the world you have all you need, just have to choose what you want to see and be part of.
It will make your vision of the country good/bad
From my point of view it's a great country, but kind of fascinated by other countries from north and Eastern Europe.
Not even sure I will stay in France forever...


You are from Bordeaux, what is a pretty old port-city. Recommend me please some places to visit and local foods, drinks and tobacco.
- Come to Bordeaux I will guide you.
I live 15 mins away from the most beautiful part of Bordeaux
You will enter pubs but you never know when you come back home ahahah
We are pretty well known for food and wine, but I don't smoke so not even sure you could find some good tobacco.
Who cares, everyone is now smoking E-cigarette.


In our private conversations you told me that you meet Eugene Ryabchenko of Castrum, etc. How many times you met? What is your opinion about his drumming? (I remember I gave him a name Infernal Warmachine on Castrum-rehearsal place because he made me half-deaf by his killer drum-parts).
- I met 2 times with Eugene:
One time was during a summer festival (Kaltenbach Open Air  and second time during the tour with Suffocation.
My opinion is simple; he is one of the top 10 best actual metal drummers. What makes him special is that he is playing singles on the feet with a precision nobody can achieve.Really hard worker, simple person, down to earth guy, he deserves what is happening to him and even more recognition in my opinion. But I see a bright future for him if he keeps his work and perseverance in the same way! 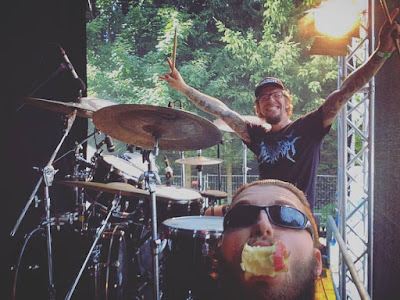 Merci mon ami, it was a pleasure to talk with you. Last Iron Flesh thoughts are yours to the readers….
- Thanks for this long and interesting interview, I want to give a simple message to readers, stay true to your roots, keep your ears/eyes open to newcomers, take what make you feel good, have constructive criticism, stop being assholes to each other and stab bands you don' t like in the back
Eat bananas and stay Necro!