Interview with Marcos and Juliano
(LoneHunter) 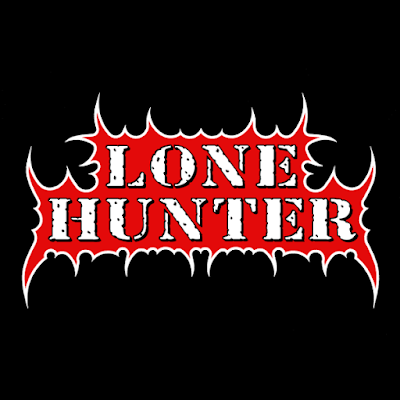 Hail brothers Juliano and Marcos! You are very welcome to my small inferno, Archangel’s Lantern! Tell us at first the beginning of your Death metal horde LoneHunter.
Marcos: I was always in love with composing and making music. Since 1990 when I started playing bass on Pesticide and Cauterization and then I started playing guitar on Immortal Majesty.


In 1995 I stopped playing to do some personal life projects, but in 2016 I decided to play again. Then LoneHunter started.

Juliano: Marcos and I have been friends for over twenty-five years, but at some point we parted ways, he went on to build a career, I finished college, got married, got involved in some projects and in 2017 we got back in touch. At the time LoneHunter had a slightly different approach and he showed me several songs. The conversations… the memories… the passion for Death metal that doesn't die… the fact is that things have converged and we join forces to make the kind of sound we are creating.

I’ve listened to Lone Hunter EP, “Beyond the Portals of Death” and I must say it’s just a brilliant Brazilian Death metal. Tell us all the important things about this EP (song-writing process, about lyrics, cover art)
Marcos: Thanks for your words, Georgius!
As with all kinds of artistic creation, there are no rules. Usually the songs start with some of my guitar riff that I quickly imagine possible drum and bass lines. Sometimes I can already imagine the keyboard and vocal lines at the time of this brainstorm.
I record and send this type of material to Juliano.
All the lyrics from the EP were written by Juliano. I just change some things to make it fit to the song. The cover art was created by Tiago Medeiros. He is very talented guy! 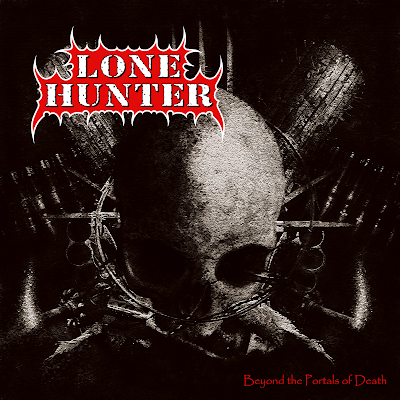 What are your future plans with Lone Hunter? Do you want to play live in the near future?
Marcos:We are working on new songs for the full length and trying to promote the band with friends, fanzines and metal radios support.
Waiting for the arrival of the EP in digipack CD format.
I play in another band, it's called Masturbator. We made some live appearances and after that I just think about LoneHunter playing live too. We are searching for musicians that want to join us in this journey.
It's too hard to find a drummer! Oh, Satan! LOL

Juliano: “Beyond the Portals of Death” is kind of a teaser for our first album. A way to introduce the band to the metalheads and show who we are. I believe the best of LoneHunter is saved for this full length and Oh yes, definitely taking LoneHunter's music to a stage is a goal.

When did you start to play the musical instruments? Which musicians influenced you back in time?
Marcos: I was just a boy when Sepultura was on the rise. Beneath the Remains was released. This was the first Brazilian band to win the world in those times. It was the golden age of Death Metal and bands like Death, Morbid Angel, Entombed, Pestilence, Obituary, Carcass, Napalm Death, Sinister, Noctunus and many others were releasing amazing records.
Listening to these bands made me want to play and here I am today.

Juliano: I bought my first keyboard in the early 1990s. Many keyboardists and pianists have inspired me over the years. Back in the 90’s Marcos and I jammed sometimes with two keyboards doing some music in the vein of old Mortiis.
Jon Lord from Deep Purple and Louis Panzer from Nocturnus has always been  genius for me. Bands like old Limbonic Art, Emperor, Gehenna's first album. Recently the work of Katarina Gubanova impressed me greatly.

What was your first band? Do you play in other bands/projects?
Marcos: My first band was Pesticide. It's a Splatter grind death "drums, bass and vocals" project formed at 1990.
We changed the name of the band to Cauterization and released its latest demo tape in 1994. (https://soundcloud.com/lonehunterband/cauterization-demotape-1994)
In 1994, I started to play guitar and was a former member of Immortal Majesty band. It's a death metal project.
When I spoke to Juliano at 2017 about to join forces with me in LoneHunter, the initial idea was to bring the Immortal Majesty back into action. We spoke to the other former members but only me and Juliano decided to go ahead. So LoneHunter idea grown up.

Juliano: I was part of the band Black Metal Ayperos for a short time. In 1996 I recorded the keyboard parts of the "Black Side" demo and the "Brazilian Underground Attack" vinyl with them. In 2002 I created the War Death Metal band Opus Bélico together with a friend.
Currently besides LoneHunter I was invited to do the keyboards in the Progressive Death Metal band Tiwanaku led by Ed Mowery (ex Nocturnus, ex Malediction). The band is recording their first album called "Earth Base One" and will feature guest appearances by James Murphy (ex Death, ex Obituary, etc.), Carlo Regadas (ex Carcass, ex Blackstar) and a few more special appearances that will be announced in the right moment. I admire Ed a lot, not just as a musician but as a human being. He always fights his personal battles in a good mood.

Tell the readers please your experiences about the Brazilian underground (past and present). Which hordes are your favourites?
Marcos: A lot of things surely have changed since I started into metal scene.
From the letters, tape trades and real world to internet.
Today all the people just want to create discussion about left-right political ideas. But they focused on discussing only and cause fragmentation with no sense or practical attitude to solve the problem. It's is just nonsense blah blah blah, you know?
The hordes that have my attention today is Exterminate, Sanctifier, Open the Coffin, Havok 666, Funeratus, Cirrhosis, Vulture.

Juliano: In the old days we were a bunch of kids all friends who just wanted to drink, listen to metal and scream blasphemies. Today here in Brazil much has been lost because of politics. It all ends in political discussions and personally I hate politics. A lot of great bands come up constantly. Some that I would definitely point to the readers are Open The Coffin, Disruption Path, Wolflust, Klamor, Hell Abyss, Sculpture (Awesome band), among others.

Juliano, you mentioned me in our private conversations that you wrote about the Gilles de Rais (Hail to Gunther and Ancient Rites) a thesis or dissertation. Tell us please about it more.
Juliano: Yes my university thesis was basically a biography of Giles DeRais with a psychological focus in the historical period. It tried to correlate the society at the time as a potentialiser in the creation of a serial killer. DeRais was an amazing and fascinating character. In college I read everything I could find about psychopathy, serial killers, and related topics. Curious that you asked this question because a few weeks ago I found my thesis in my library and realized that although a bit raw it is good, well written. Maybe I will update it and in the future will release it as a book ... Just plans yet, let's see. 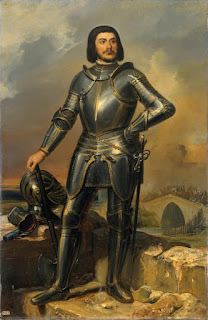 I’m a big fan of Brazilian football and team since 1982, Zico, Socrates, Eder times…Do you have any favourite players and teams in Brazil?
Juliano: Brother, I think you're talking with the two wrong guys about it. I've always been a little traumatized by football because of the school days, I was always the last one to be chosen to play and if someone chose me before others would shout "Noooooo, not him." LOL. Not my cup of beer, sorry.

Perhaps you know that my blog is dedicated to Jon Andreas Nödtveidt. Did you see Dissection live back in time in Brazil? Have you any favourite tracks/album from Jon’s heritage? (not only Dissection)
Juliano: I didn't get to see Dissection when they came to Brazil. My friends make a point of rubbing the pictures in my face always ....
For me the album Reinkaos is one of the best ever written in the history of Metal. Not only musically but also the lyrical part. Jon was a genius and everything he touched turned to gold. I like even De Infernali his most controversial project.
My favourite tracks are Dissection’s “Where Dead Angels Lie”, “Xeper I Set” and “Maha Kali”. 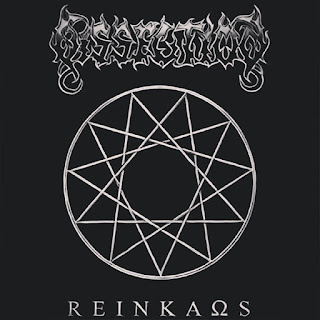 Juliano, tell us please about your activity in Lucifer Rising magazine.
Lucifer Rising is a magazine for the extreme underground metal and has existed for over 15 years.
The problem is that fewer and fewer people consume magazines these days and the publishing world is having to readjust. With this idea in mind, my friend Eden Lozano, who was already working on the team of another Brazilian metal magazine, took the lead with the proposal to broaden the concept of the magazine by creating the Lucifer Rising portal. I was invited to be part of the team of writers along with some important representatives of the Brazilian underground and we are struggling to bring the best content possible to all metalheads.

One of our mottos is that there is no band too small for us. By the way I invite all the bands that are reading and want a good disclosure to get in touch. We are always available.

I’ve never been in your beautiful country but I really hope to have a trip someday. Recommend to the readers some local Brazilian foods and drinks and interesting places to visit.
Marcos: Brazil is a great place to trip to. I think "Diversity" is the word that describes our country. From Amazonas to Rio Grande do Sul, you will see a lot of different things, from food/drinks/fruits to beautiful places (beaches, waterfalls, rivers or sights). It depends what you are looking for, but certainly you will find a good reason to come here my friend.
I love our food. Our cooking is a mix of local and worldwide tastes.
And NO, I don't agree tourists who come here for sexual reasons. Yes, we have a lot of beautiful girls but They deserve our most sincere RESPECT.

Obrigado brothers, it was a pleasure to talk with you. Share some thoughts of LoneHunter to complete this interview.
Juliano: Thank you for the opportunity. It is an honor for us. Personally, I believe the underground is made by the union of those who live it. I see a lot of people wasting time discussing things that have nothing to do with metal. I think we could be more productive if instead of talking badly about a band that we didn't like we could share two others that caught our attention. I wish to Archangel's Lantern success and long life.