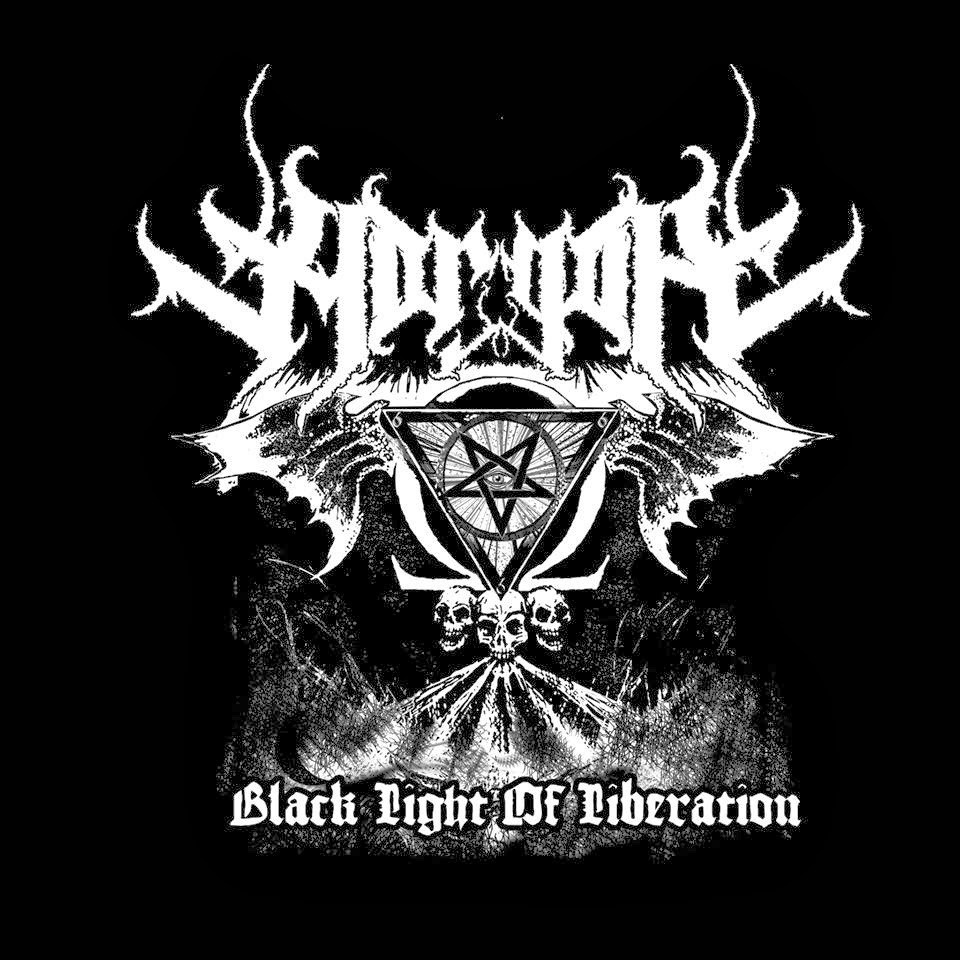 German Death/Black metal horde was formed in 2007 by H. (guitar/vocals) and N. (guitar/backing vocals). G. (drums) and U. (bass) joined them in 2008. It was 5 years ago, when I listened to Morgon for the first time on Myspace and noticed their talent immediately. After the demo ”Formless Divine” (2009) the guys released an excellent EP, ”Infinitas” in 2010 and an awesome demo, ”Saint Of Death” in 2011 (in my humble opinion ”Saint Of Death” more than demo because the sound’s quality is simply brilliant). Morgon recorded their first full-length album, ”Black Light Of Liberation” last year and it contains 9 Songs of dedicated Occult Art. Obscure journey by German quartette starts with a ritualistic track, called ”Unveil The Gates Of Choronzon” splendidly introduced the whole atmosphere of ”Black Light Of Liberation”. Morgon-guys created a very diversified album, they masterfully mixed massive, brutal parts with occult harmonies and the sound’s quality is perfect just like musical ability of German band.
My favourite songs: ”Luciferian Trident”, “The Awakening Of The Firebeast” and ”Goddess Of The Blackmoon”.
I would recommend this unique album to all the fanatics of Dissection and Unanimated and I hope I’ll see Morgon live on the stages soon.
Morgon: "Black Light Of Liberation" is planned to be released during March/April via Obscure Abhorrence Productions.


my conversation with Morgon (H, G and N) in Sadistik Witchfukk webzine
(21th of February, 2013): 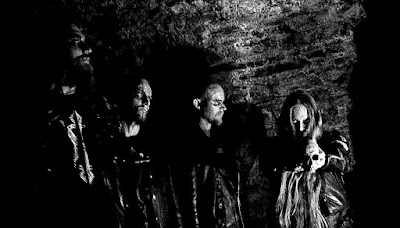 Salve, Morgon! Enlight, please, the readers about the beginning of Your horde...and tell us about the Morgon name!
- H: The Band was formed in the Winter Months of 2007 by me and Nordah. Our goal was to create very dark and intense music with the roots of occult Magick. It has begun as a two-man-project and became a full band in 2008 as Ghrym (Drums) and Urisaz (Bassguitar) joined the Abyss. We chose the Name ‘Morgon’ basically as a fictional name, but it also means ‘Dark Mountain’ in some French region. For us, Morgon is a symbol and a tool for representing the individual dark spirit (The Black Flame) and stands for the thought of illumination and liberation of the self.

I have Your 2 materials (very thankful for that), "Infinitas" and Your last one "Saint of Death".. Your first release as EP, second as a demo, but for me your last one is a EP too. Relate us about recording process of these (lyrical concepts too).
- H: Our latest release ‘Saint Of Death’ was recorded by myself in our rehearsal place/Necrosophic Studios after the summer solstice of 2011 in a very ambiental and creative mood. So we all had the time that we needed to record the new material. You can call it Demo/EP or whatever, but because of the playing time we decided to call it a demo with 5 tracks. It is a concept record dedicated to Master Qayin, the Lord of Death. The music and lyrics it represents are all inspired by ritualistic words of the qayinitic lore.

I heard Your rehearsal materials firstly on myspace in Summer 2009 and I was surprised about Your raw and powerful energy. Recount us about your inspiration or inspirations, please!
- G.: As religious individuals, we draw inspiration from our personal studies and experiences on  our path - the path on the left (LHP). We dedicate ourselves to the infinite, dark and clear essence of Chaos (the primeval source, the origin and the end of all) and the related deities with the final aim of liberation.

I know you are from Sachen-Anhalt region.  Introduce us in Your local scene!
- H: In the 90's there was a small group of metalheads here, but nowadays they all disappeared in some bigger cities or just listen to fuckin` metalcore, you know… If you like, check my other band ‘Into Obscurity’ http://www.into-obscurity.de/, kind of Melodic Death Metal from the old days.
- G.: I don´t think there is any kind of “scene”; it´s only a small region. The only two nameable bands are "Into Obscurity" and "Trimonium".

I always think about one interesting fact. Maybe our common inspiration: Jon Nödtveidt, who connected us with you in 2009. Your opinion about Him?
- H: Strength, will, fearless and now one with Chaos, a Fireborn-Satanist. Still a great inspiration for me as a person and musically of course.
G.: Jon was definitely a very interesting, strong person. But I wouldn´t describe him as an inspiration. Everyone has to cut and explore his own way on the path he had chosen. Nevertheless he was a great visionary, a talented musician and a kindred spirit.

How was the situation with Your live performances last year?
- G.: Beside some "usual" club gigs we had the great honour to perform a live ritual with The Devil´s Blood in Leipzig last year. This was an interesting experience and the most nameable event.
- N.: For me it is always satisfying to perform live. During a live ritual it sometimes seems that people can feel a kind of "inner disturbance" which they can´t escape of. It´s a great feeling to see the flames rising in their eyes.

Which covers did you played in your past in live-show and which will you plan?
- H: We played a cover from Bathory ‘Raise The Dead’ and Tormentor ‘Elizabeth..’ which perfectly fits in our set. I think we`ll always play one or more covers at the shows, you`ll see.

You are working with recordings for the forthcoming Morgon album, Your debut LP now. How many tracks do You plan to record and when it will be published? What are Your plans after the recordings?
- H: At the moment we`re recording our debut LP which contains 11 tracks and will be released in Summer. After the recordings we will do some promotional stuff, hopefully with a label as support.

What are your favourite 5 LP's, movies and all-time favourite books?
- G: I can´t name „all time favourites“ because it changes constantly. It also depends on the occasion. At the moment I´m fascinated about "Þurseitr", a ritualistic dark ambient project by a friend of mine from Scotland. I use it for my seta´s (a kind of meditation).
- N: Favourite movies of all time? Difficult to say, because I´m not a great movie fan. But I like the work of Anthony Hopkins as actor and composer, for example in the masterpiece "The Waltz Goes On".

Germany is not only famous as a great historical, cultural heritage... You have more and more great bands, in past and now too... What are Your favourite German bands or musicians from Your excellent scene? What do You think about the band Erazor?
- G.: Sodom, Thulcandra and Nawaharjan, the band of a spiritual brother. I don´t know Erazor.
- H: Poison, Abigor, Hidden in the Fog.

What do You think about the last Gorgoroth releases, as "Quantos Possunt", "Satanitatem Trahunt", and a new one, re-release album, "Under a sign of hell"? More metalheads said that the re-released "Under the Sign of Hell" is too clear. For me it is ok, because I like all the drum parts of Tomas Asklund in all His bands. Your opinion about it, bitte!
- H: The old, raw, crushing Gorgoroth sound is gone but ‘Quantos Possunt…’ is a good "rebirth" album.
- G.: I like the new records, I don´t think that the clear sound is a disadvantage.
Additionally, Tomas Asklund´s drum parts are always impressive, very strong and precise.

I hope I'll visit Your great country in the near future, because I've never been in Deutschland and I want to see your mystic landscapes, for example Harz. Are you inspired by your landscapes?
- G.: Yes, it can be said that the Harz is also an influence for us because it is a dark, magical place where many legends were created. The Brocken (Blocksberg) mountain is famous for the traditional "Walpurgisnacht" (Walpurgisnight), which is known as the “feast of the witches”. It is my favourite place for magical workings and we´re often going there.

Another question: what do you recommend us, the readers, to eat and drink in Germany? Your local foods, drinks, species, tobaccos?
- H: The German famous beer of course and Absinth from our local distillery and maybe some Roulades to eat...

Danke sehr, Morgon! We hope to see You at Your live shows soon! Your message to the readers of the blog "Sadistik Witchfukk"?
- N: Maybe there is an opportunity to play in your country as a part of a small tour with a local band next year. Thanks for the interest and stay tuned for further news.