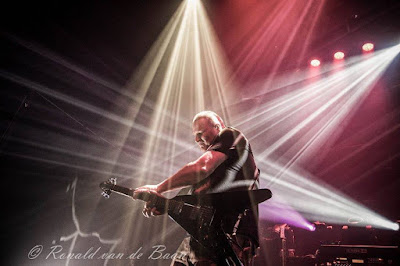 Hail Erik, we are very glad to talk with you again here at Archangel’s Lantern. I must say, “Stigmata Me, I’m in Misery” is just a brilliant masterpiece of old school Thrash metal. Are you satisfied with how the album turned out? (In my humble opinion Inquisitor sounds stronger than ever)
- Hail Georgius, thanks for your kind words. Oh yeah, we are very much satisfied with the new album. We stuck to our guns even after almost twenty years, which is remarkable in itself, but we also managed to make some progress as well musically. Alex Wesdijk wrote all the lyrics, and some of his  lyrics are a bit more personal compared to our older lyrics. The new album definitely has an old school vibe and it sounds 100% like Inquisitor and it's great to have this album recorded in the original line-up too. We recorded our second album at the Toneshed Studio in The Netherlands, which is run by Erwin Hermsen, who is a former guitarist of Mangled and he did a fantastic job! I  recorded my guitar solos at home and sent the audio files of those to Erwin. “Stigmata Me, I'm In Misery” sounds like what people were used from us, but we also managed to include musical ideas which we couldn't have done or wouldn't have come up with in the 90's. For instance, the beginning of “Holy Man's Gallows Pole”, is something which we probably wouldn't have done in 1995 and I also wouldn't and couldn't have played slide guitar back then, but slide guitar playing by me can be heard in “Hammering Rusty Nails” now. The end solo of "I am Sick, I must Die" was in it's early incarnation just a nice guitar solo in D-minor, but later I changed it to what it has become now. Alex Bakker (bass player) showed us in the rehearsal room what he played underneath that D-minor solo, which was a very great bass line so I changed the guitar solo to compliment his bass playing. I rewrote it by adding a few unison bends followed by some fretboard tapping. The very end of “Northern Goliath – Death A Black Rose” was a great idea of our singer Alex Wesdijk. Our drummer Wim is highly involved in structuring the songs, and is always thinking how to improve his drumming and drumfills. Each member in the band contributed to the music and everyone had made progress throughout the years and widened his musical space. We do what we like to do without restricting ourselves regardless of any trend, criticism, image or whatsoever and we will continue to do so. 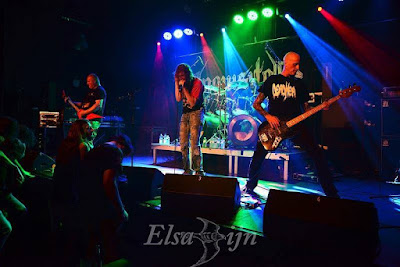 Hey Erik, it has been a while, tell me the latest news about Inquisitor. (Anita vH)
- We finally have a new album out for some months now, and we are promoting it the best way we can, but we also started working on new songs again for a possible new album. We still have some new music in us to unleash upon mankind and there are quite some new really interesting ideas. Some ideas may be leftovers but some of those are great and will be used. We certainly do want to make another album, there is absolutely no doubt about that. Although we hardly have any budget, there are plans to make a video clip. In this digital and visual age it's important to have a video clip.


Saw you had a few gigs with Pestilence, Dead End and Dead Head. How were these? Any abroad gigs planned? (Anita vH)
- Those gigs were arranged via Hammerheart Records, and they were absolutely great. One was on a Sunday in Maastricht, in the South of The Netherlands and the other one was on a Friday in Drachten, which is in the North of The Netherlands. I personally felt that the gig in Drachten was the best in my opinion. The sound on stage was good, and I think that we performed damn well. However Alex Bakker, our bass player, felt that he had the perfect monitor mix on stage in Maastricht. Anyway, it was great to do these gigs as support for Dead Head and Pestilence. For us it was a great opportunity to open for Pestilence and Dead Head. Behind the scenes we are trying to get gigs abroad, and it seems that we will do a gig in Belgium next year! And we are looking forward to play with Pestilence again in December. 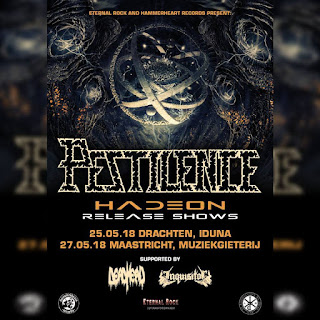 “Laguz” has been your last album after 9 years from “Rubicon”. Will there be a new album soon? (Paco, Spain)
- I don't expect a new album very soon unfortunately, but there may be a chance that some of our older albums will be re-released. Most of the older album have been out of print for a very long time and  need a proper re-release in my opinion. Some have never been released on vinyl but there are bootleg versions circulating. For a new album we definitely need some budget, and that is hard to get nowadays. Because of this, we most likely need to change the way how we will write & record a new album. We probably can't do that the way we used to do. But we'll see what happens...

How were the Ancient Rites shows in Roeselare and Rotterdam this year and in Athens in 2017? Share us please your memories from these concerts.
- Although the schedule was delayed, we did get a great response from the Greek audience, and it was about 18 years ago since we last played in Greece, so some fans were kinda hungry to see us again but there were also new fans. And of course it was nice to visit some ancient areas  in Athens the day before the gig. We don't always have time or get the chance to visit beautiful spots in the area where we play live.
In Rotterdam we played in a venue called “Baroeg” in The Netherlands where we have played a lot, and I mean A LOT. This particular gig on the 31st of May was great, even a bit beyond my own expectations. So I felt very satisfied after the gig in Rotterdam.
Roeselare was also very good! The audience was fucking great, and it's always a pleasure to play in our own territory. Roeselare has always been good to us, also in the past. The venue (De Verlichte Geest) reminded me a bit of the kind of venues we used to play in the 90's.
Recently we did a live show on Malta, which was a nice experience. We also spent a little time with the whole band near a historical place on the island close to our hotel, which was extremely satisfying. 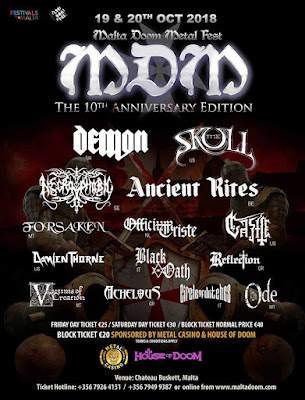 Are you going to do any European tours (you might include some dates for Valencia, Spain – I believe you never done any shows somewhere here)? (Paco, Spain)
- Due to obligations, mainly work-related, extensive tours are not possible for us anymore but we can do weekend shows. Promoters can contact me directly for that.

I’m a faithful follower of the underground scene since the early 90s. Currently, several bands inside it are the scene, but... How do you see now the underground scene in general? Any bands are there that you like specially? (Paco, Spain)
- The underground scene is still vibrant and in some ways it still works the same way as it did in the 90's but internet has changed a lot of it and metal has seen an increase of substyles too throughout the years. I still go to underground metal concerts but not as much as I used to do. It's not always possible for several reasons, but I like to go to more underground concerts than I do now. I certainly like to have a good time and maybe discover new bands at those concerts. Nowadays via Facebook I get a lot like requests from people who want me to like their band and sometimes, some of those underground bands are interesting which is great. I remember liking a thrash band from South America called Maze of Terror, Cruentator from Italy and more recently Ancestor, a thrash metal band from China. I still like bands from the old underground days like for instance Sathanas, and Hellwitch. 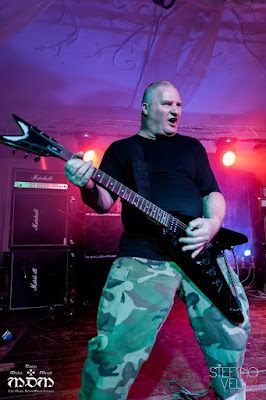 How it’s going with your cover band, Plusminus? Did you play any live shows lately? What is your current line-up?
- Plusminus is doing fine. The line-up hasn't changed since December 2006, so we have a pretty stable line-up (Arie Kampman – vocals, Erik Sprooten – guitar, Peter Jung – guitar, Alex Bakker – bass guitar, Chiel Lozeman - drums). Meanwhile, we are working on “new” cover tunes to add to our set list. We just keep going and it's always fun to play together. In February we did a special but bittersweet performance at the “Celebration of  Life” of a good friend of ours who passed away a few days before. He performed TNT from AC/DC a few times with us since he was diagnosed with a terrible disease. On a Saturday exactly between the Inquisitor shows with Pestilence, Plusminus played a nice show not that far away from our area. Next year we will play again close to Belgium.

It’s a little bit hard question, but what do you think about an idea to play some massive shows together with following bands: Ancient Rites/Inquisitor/Sammath?
- I'm certainly in for it. I'm pretty sure that I can handle playing guitar for Ancient Rites and Inquisitor on one evening. For Wim it may be tough but I'm sure he can handle it but after two shows on the same evening, he might be totally wrecked but certainly satisfied, but I guess he can answer that question much better. 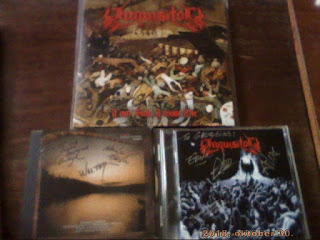 (my Ancient Rites and Inquisitor-treasures with dedications- GF)

What is/are your favorite cartoon(s) from your old band-mate of Ancient Rites, Gunther’s work?
- I can't name a particular cartoon from Gunther which might be my favorite but I always enjoy his cartoons every Friday on Facebook. It's great that he does this 'cause he certainly has talent for this. I also love to see another comic by him of Van Roy & Sid. 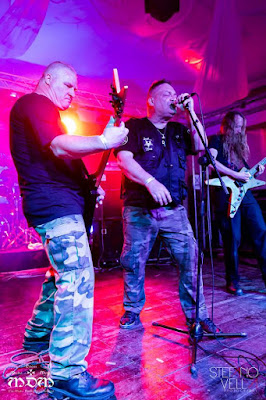 Dank je wel/thank you very very much, Erik, please send some thoughts from the medieval inquisitor chamber to the readers.
- Georgius and also Anita & Paco  Thanks a lot for this interview. Your support is highly appreciated! 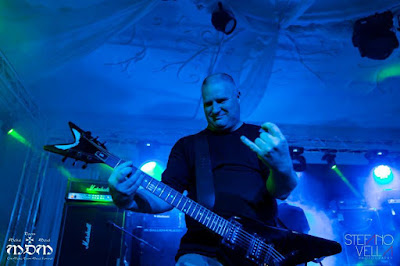